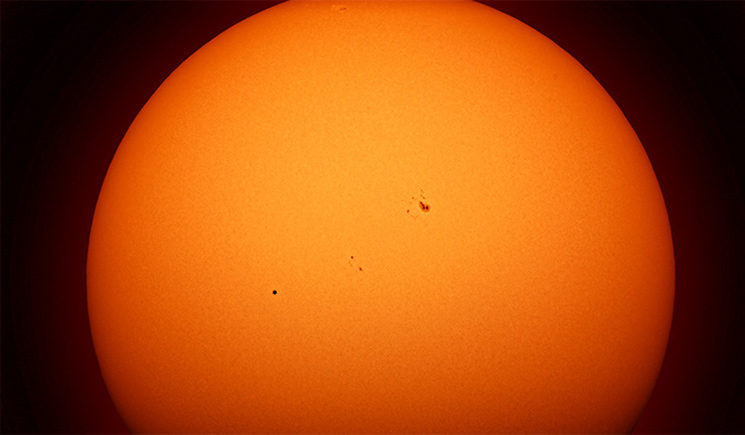 Today I’m going to show you everything you need to photograph the transit of Mercury across the Sun. It will happen very soon, on November 11, 2019. And it’s a rare and amazing spectacle to photograph.

Every once in a while, a planet passes between Earth and the Sun blocking out part of the Sun’s rays from reaching Earth. This phenomenon is called a transit.

There are only two planets that can be seen transiting the Sun from Earth: Venus and Mercury. Basically, because they’re the only planets orbiting inside Earth’s orbit.

Transits are very rare. The next Venus transit, for instance, won’t happen again until December 2117…

Luckily for you, Mercury transits occur more often (like the November 11 one!). After that, it won’t happen again until 2032.

Considering this, it’s a great opportunity to photograph this event. Mercury will be a tiny black dot silhouetted against the Sun’s disk!

Now, the good stuff is that in this article you’ll find everything you need to plan your picture (I’ll teach you how to use PhotoPills to help you) and to nail your shot.

Are you ready for the challenge?

When to shoot the 2019 Mercury transit

From 12:35 to 18:04 UTC, Mercury passes between the Earth and the Sun, appearing as a black dot on the solar surface. The greatest transit occurs at 15:19 UTC.

As I said, this event is very rare and occurs once every many years. Mercury’s next solar transit will not take place until November 13, 2032.

A transit has 5 important phases:

Here is a table from where you can photograph the transit of Mercury across the Sun on November 11. All the information is in local time.

Please consider the local times of the table below as approximate. The transit times that I mentioned above (i.e. 12:35 to 18:04 UTC) are geocentric. In other words, they are only correct if you’re located at Earth’s center.

So, the contact times for your location may vary from the geocentric times by up to 2 minutes. You’ll be seeing the transit from Earth’s surface, not from its center ;)

Unfortunately, all the transit phases won’t be fully visible everywhere so I have also included cities where it will be partially visible, either because the Sun is rising during the transit or it’s setting. Check the Sunrise and Sunset times for your location with PhotoPills and compare it with the start and end of transit. This way you’ll know from when to when the transit will be visible.

If you want to know when the different transit phases occur according to your local time, open PhotoPills and follow these simple steps (see screenshots below):

PhotoPills Planner – Place the Red pin in Iceland and use the Time Bar to set the date and time when the Mercury transit starts (November 11th, 2019 at 12:35 pm).

PhotoPills Planner – The Red Pin position marks the shooting spot. On the map, you can see the position of the Sun for the selected time (7:35 am).

As I told you before, the local times are approximate. So make sure you get to the shooting spot in advance. You should be ready to shoot at least 10 minutes before the start time you’ve calculated with PhotoPills.

Where to shoot the 2019 Mercury transit

The 2019 Mercury transit fully is visible, from start to finish, throughout South America, Central America, eastern USA and western Africa.

Where should you go to photograph the Mercury transit?

As always, your shooting spot will depend on the photo you want:

The Sun and Mercury as your main subjects

If you’re lucky to live in a place where the transit will be visible, open PhotoPills and go to the Planner. Then, place the Red Pin on the location where you want to plan the shot and use the Time Bar to set the date (November 11th) and the time at the beginning of the transit.

For example, in New York, the Mercury transit begins at 7:35 am. Follow the workflow that I explained in the previous section to figure out your local time.

Check the PhotoPills screenshots below.

PhotoPills Planner – The Red Pin position marks the shooting spot. On the map, you can see the position of the Sun for the selected time (7:35 am).

PhotoPills Planner AR – The Augmented Reality view shows you the real position of the Sun at all times.

I’ve placed the Red Pin near the Lefrak Point Lighthouse in Jersey City, where I have a beautiful view of Manhattan and a clear vision of the Sun (without obstacles). The thin yellow line you see on the map is showing you the direction of the Sun at 7:35 am, when the transit begins.

Once you’re on location, right where the Red Pin is, use the Augmented Reality button (at the bottom) to visualize the position of the Sun in the sky.

Check where the Sun will be when the greater transit happens and when the transit ends. In New York (USA), for example, at 10:20 am and at 1:04 pm.

If necessary, change the shooting spot by moving the Red Pin. For example, if there is an obstacle blocking your view.

You know where to stand and where the Sun will be at all times during the transit!

Capture the Sun, Mercury and the silhouette of your subject

If you want to go a step further, you can include the silhouette of a subject. In this case, you need to find the shooting spot and shooting time when the Sun is low enough to be aligned with your subject.

Let me give you an example.

Imagine you want the Sun to be aligned with the roof of the One World Trade Center. So you need to find the shooting spot and shooting time this will happen.

All you have to do is go to the Planner, and follow these steps:

When you’re out there waiting for the Sun to be in position, always be ready to adjust your composition by adjusting your shooting spot.

As the Sun moves, you’ll have the opportunity to shoot different compositions :)

PhotoPills Planner – From the Red Pin position you can photograph the Mercury transit with the One World Trade Center at 7:49 am.

If you want to master the Planner’s Panel 2, check this video where Rafael uses it to plan a cool Moon shot with the Sky Tower in Auckland (New Zealand).

You can follow the exact same workflow to plan the Sun transit with your subject.

How to photograph the 2019 Mercury transit

The good news is that this type of shot is not as hard as it seems: use the Sun as a reference and everything will be fine.

So, in terms of composition, you should aim to have a close up the Sun (i.e. it should fill a large area of your frame). Same thing for the focus and the exposure, set your camera according to the Sun.

Having said that, you’ll obviously need:

Please, make sure you don’t forget the last two pieces of gear. You should protect your eyes and gear against the solar rays at all times. Otherwise, you risk damaging your eyesight and equipment.

When shooting the transit of Mercury, follow the same shooting workflow of a solar eclipse picture:

Regarding the focus, one last thing.

If you want to capture the Sun, Mercury and the silhouette of your subject, focus on the subject as long as the hyperfocal distance is shorter than the distance to the subject. It’s the best way to make sure that the Sun is also in focus.

However, when the hyperfocal distance is greater than the distance to your subject, there are two alternatives.

Here you have it…

Everything you need to take your picture of the November 11th Mercury transit across the Sun.

You can’t miss it.

If you get the shot, submit it to the PhotoPills Awards. Can’t wait to see your photos.

And if you have any questions, leave a comment below.

Antoni Cladera is a nature photographer driven by his passion for the environment. He photographs landscapes, astrophotography and macro, but isn’t afraid to shoot the occasional portrait. You can find out more about Antoni on his website and follow his work on Facebook and Instagram. This article was also published here and shared with permission.

Photo capturing the Sun, ISS and Mercury in a single frame