If you are living anywhere on this little planet of ours and are subscribed to any of the blogs about photography, videography, HDSLR, or cinematography you are probably aware that the Magic Lantern team has a firmware that can shoot RAW video on a Canon 5Dmk3 in up to 3592×1320 resolution. 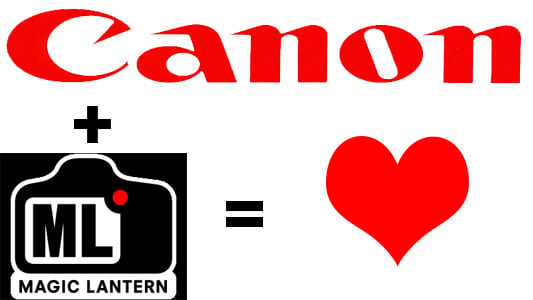 While this is not an official release by Canon, and so far I have not seen any response from their PR department or from other reps, I think that this is the best thing that Canon could have wished for.

What is Magic Lantern, And What is RAW video

Magic Lantern is a custom firmware not developed by Canon. It is supposed to be fully safe to use, fully reversible to the “regular” firmware and it adds various features to Canon DSLRs which are not there by default. Focus peaking, Zebra lines, Audio meters and AGC-disable and many more. It provides a great toolbox for cinematographers using Canon SLRs.

Raw video to regular compressed video is what RAW images are to JPGs. When the camera converts captured sensor data to an image file it can take one of two paths: A – Save the data almost as is came from the sensor to a RAW file. Or B – manipulate the photo in a way that loses some of that data, then compress it and save it as a JPG file. The compressed file has less resolution, more artifacts and reduced dynamic range.

Same with video: The h.264 (or its AVCHD variant) stream coming from Canon’s DSLRs is a highly compressed video which loses some of the data captured by the sensor. If you could only tap into that raw sensor data, you would get significantly better and more flexible video footage (just see the comparison here).

So Canon Should Be Happy To Have Such a War Machine At An Affordable Price, Right?

That totally depends on who you ask. If you ask me, I’d say “Hell yes!”. But here is what I think Canon are thinking. (Of course, I am not Canon so this is only a speculation, but play with me).

I am thinking that Canon probably thinks that this is a disaster on so many levels that it is almost impossible to count. I’ll give it a try though.

A Shift In Market Segmenting – Traditionally, the camera market is segmented into Amateurs, Prosumers and Professionals. And both the price and features of a camera are affected from its designated segment. With the 5Dmk3 now providing similar (or even better according to EOSHD) video than the pro level C300, why would anyone buy a C300 now?

This Is Bad For PR – While I have not heard anything from Canon about this, I can see how their PR reps are struggling to explain why they blocked certain features from the camera when it could have been exposed by Canon themselves giving more value to their customers.

Loosing Product Control – So now there is a team out there that knows a heck of a lot on the internals of the Canon firmware (and hardware) and they can do whatever-they-damn-want with the camera.

I bet there are some other good reasons for Canon to be concerned about but I think those would be the main three.

So Why The Heck Did Canon Put This In The Chip In The First Place?

This is a good question and while, again, I am not a Canon official, I can make some guesses based on my years of experience with a silicon/hardware company.

Silicon Integration Is An Expensive Business – It takes years to develop and integrate a chip and if you multiply the number of R&D Engineers, QA, Silicon designers, Algorithm designers and the rest of the team, you could easily get tens of hundreds or thousands of men-years just for a single chip. So sometimes companies will create one silicon chip with a super-set of features, and wrap the chip in different way to expose different feature subsets. It could be different pin-outs exposed on the chip, different labeling on the enclosure or blocking things in software (or firmware) from the world to see.

Market Segmentation – Yes segmentation again. Canon needs to make all kinds of cameras for all kinds of people. If they all had the same set of features, it would not makes sense to segment them out, right? So one chip may serve several products each pulling into a different subset of features.

They Did Not See It Coming – While Magic Lantern has been with us for a long while, it was mostly about “soft” features – mostly display and control features. While reverse engineering any software is hard, doing it to firmware is harder and diving in on DMA channels, data paths and other highly internal mechanisms is very, very hard. So Canon may have thought that sure, these ML guys are having fun, but they will never expose those hardcore features we have in there, right?

They Might Have Wanted to Release This Later – Who knows. Maybe it is a plan B from Canon to fight Black Magic if they ever got too big. Maybe Canon wanted to release this in a few months time along with their next camera so mk3 owners keep will the value of their cameras? Maybe it was the plan all along. We will now never know.

How Can Canon Move On With This?

As I said before, I would really like to see a statement from Canon about ML and video RAW. But even without one, I can see several possible outcomes as far as how Canon moves on with this.

Option 1 – Try To Kill ML: While technically hard do on cameras already out, this is definitely possible on un-shipped cameras and even more so on chips in development. They could encrypt the firmware so it is harder to hack; they could better sign it and require a signature on every run which would make ML harder to run custom firmware; and if they wanted they could physically block (for example using eFuse) any future chips from having any of the “more advanced” features, while retaining the benefits of a single chip development cycle.

They could also potentially go after individual users and DMCA them, or DMCA the ML team. Lexmark tried to pull that in 2002 and failed, but no one is to say that Canon can’t try this again.

Or they could hire some key members of the ML team to slow them down like Apple did with Comex and Peter Hajas.

Option 2 – Ignore ML: I think that this is a very likely course for Canon. They will not acknowledge this firmware but will not do anything (major) to block it. This (and option 3) have huge benefits for Canon. Will talk about this next.

Option 3 – Embrace ML – Yea Right. Like this will ever happen. That will never happen because Canon is a huge corp and it will never let go over their control on their products, but it OK to hope.

Why This Is The Best Thing That Happened To Canon?

I say (and please Canon, I would love to debate on this) that this is the best thing that could have happened to you and fully supporting (or at-least ignoring) ML will serve you well in the long run.

This Will Not Affect Pros – While you may think that you are losing some of the pro market, I don’t actually think you will. When you are a pro, it is not only about features. It is also about reliability , and while ML may be great it is still not supported by Canon. And I am not sure if any pro will take the change of getting stuck (or overheated, or bricked or godknowswhat) on a critical day. So pros will still get the higher priced cameras for high-end features.

You Won The Amateur War – So what do you think most amateurs will want to use? A supported D800 with compressed video or an unsupported 5Dmk3 with RAW? This is very likely to increase the sales of the 5Dmk3. Anyone who is “playing” with digital video (and some are playing very seriously) will get a 5Dmk3 now.

You Are Building A Customer Base – And all those photographers and videographers will get lenses, batteries, grips, strobes and whatnot gear that only works with Canon. Let’s see all of them switch systems later when Nikon comes up with video RAW. Not gonna happen. This is a major win in the long run.

You Are kicking Black Magic Where It Hearts – It is a new standard and you get to lead the revolution. If Black Magic was about to take the lead for medium priced quality video, you now have a change of kicking their behinds (both Cinema5D & EOSHD say so). You could be those guys. The ones who opened up RAW video for the industry. Just go with option 3. Run some tests on your own. Say that you don’t support it, but there are no overheating issues. You will gain the love and respect of the community. And better yet, their loyalty.

You Now Have The Best PM Team Ever, Your Users – Hey Canon, does your Product Management team ever wonder what are the features that you should put in your next DSLR or the next firmware update? Just hear over to ML forums and see what they are using, craving and implementing. This should give you some great (and proven) market research. But it is even better, the ML community is testing all those features out for you. So you get a dedicated team of un-proportional size to beta test all those features and ideas in a huge array of scenarios without lifting a finger.

You got an awesome Media Buzz, Just Keep It Going – no kidding Canon, nothing would buy that amount of positive attention with the high end market, no matter how much you invest in billboards, interviews and featured movies, this kind of media buzz is a once it a lifetime buzz. And you did not have to pay a cent.

This entire post, of course, is coming from my imagination and experience with similar (yet so very different) products. I think this is a golden opportunity for Canon and would love to see a response from them. Don’t you?

« Saying No To Jobs And Getting Paid
Hotel Keys Don’t Work? Make An LCD Hood! A Pictorial »