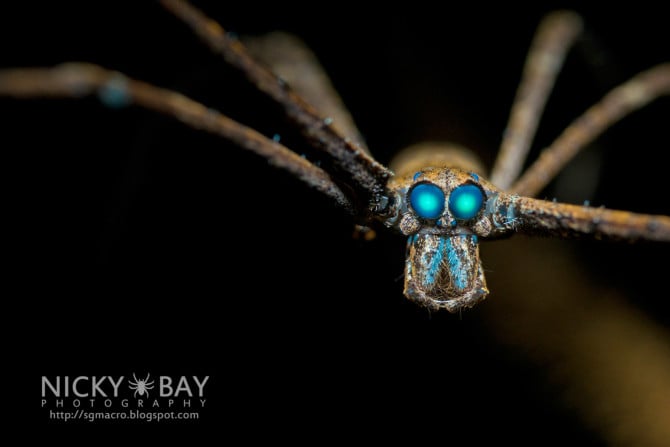 Ogre-face spider (Deinopis sp.) Just when we thought that the ogre-face couldn’t get any scarier, the eyes lit up under ultraviolet with an eerie blue.

Whether creepy-crawlies make you run for your camera or run for the hills, these photos will not leave you indifferent.

Be it a beetle, a spider or a scorpion, Nicky Bay has pointed an ultraviolet light at it – and a lens.

Many people have seen photos of UV-lit scorpions, but “little has been studied on fluorescence in other arthropods” says Bay, adding that “as we are still in a ‘discovery phase’, we would shine UV on any living creatures found in the night“.

Before you run out to try this yourself, you should know that Bay recommends a 365nm UV wavelength if your goal is to get aesthetic shots. Wavelengths of 395nm or longer will result in the entire frame appearing blue. Bay uses what he defines as “Any 365nm flashlight from eBay“.

On his website, Bay goes into great detail regarding the macro equipment he uses with his main gear being a Nikon D800, a Tamron 90mm f/2.8 with Kenko 36mm Extension Tube or Nikon 200 f/4 (both macro lenses) and a pair of SB-R200 strobes. Other than going into Bay’s gear bag, I personally recommend you read his Macro Photography Ethics article as well.

Those of you who have tried macro photography know that a successful shoot requires certain conditions, such as there being no wind. But as not all creatures were born equal (or equally fluorescent) when it comes to UV photography, Bay adds luck to the list of necessary ingredients. “We only found suitable subjects once in a few night field trips. Hence for one who wants to venture into this, give it time and let it be a bonus instead of the only goal in the field trips“.

Based in Singapore, where all these photos were taken, Bay is currently working on a book about the spiders of Southeast Asia. This means you can expect to see many more astonishing photos in the near future.

If you’re new to macro photography and would like to learn more about it, check out how Thomas Shahan does it. You will also find inspiration in Alberto Ghizzi Panizza’s photos of insects reflected in dew drops. 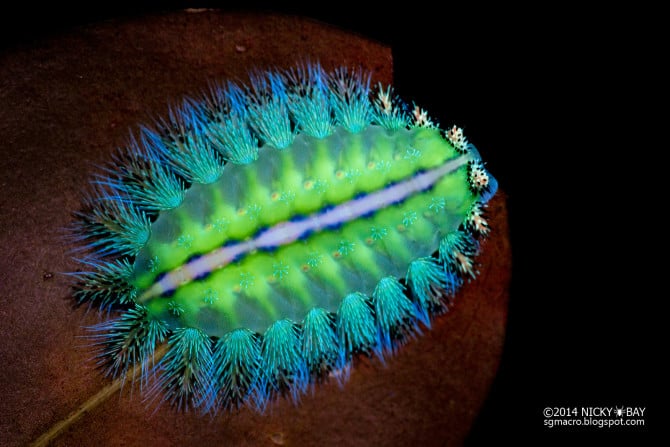 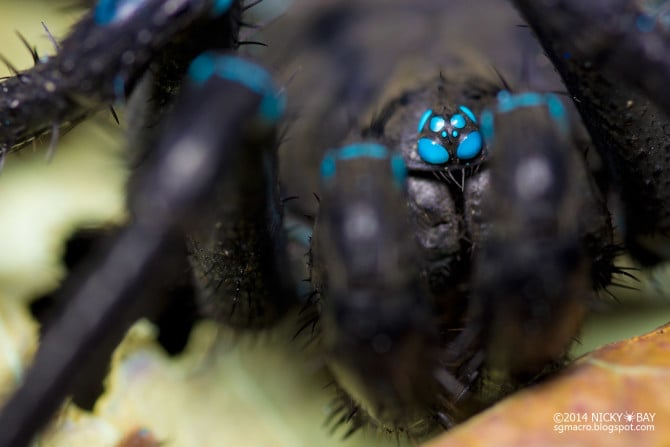 Segmented trapdoor spider (Liphistius sp.). Some spiders can be incredibly black and reflective, which makes the eye arrangement difficult to see. Ultraviolet light helps to highlight the eyes in this case. 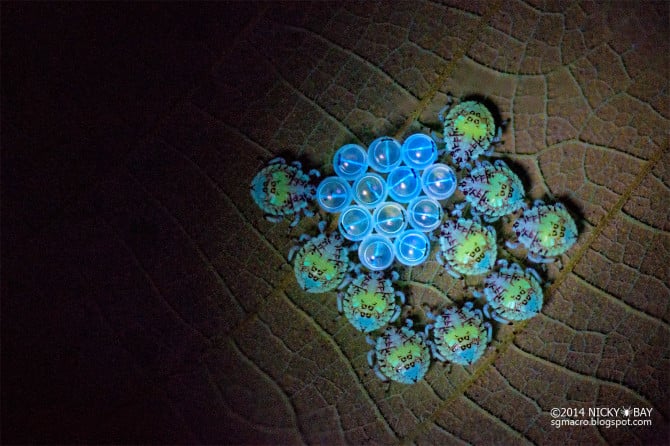 Stink bug hatchlings (Pentatomidae). A small cluster of hatchlings with an outstanding fluorescence under ultraviolet. 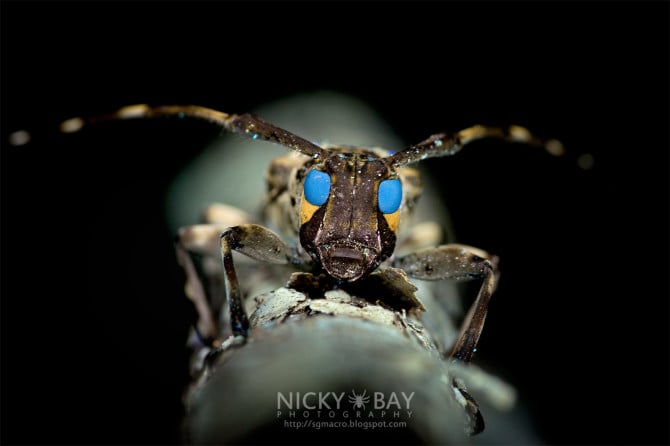 Longhorn beetle (Cerambycidae) Most beetles have compound eyes that will fluoresce under ultraviolet. It allows an alien-like view like this. 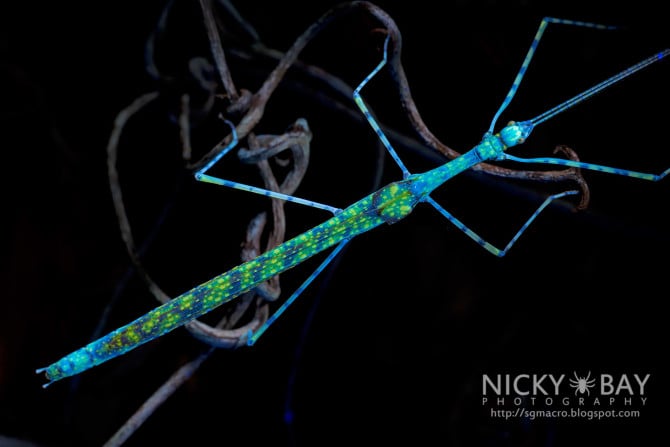 Stick insect (Phasmatodea). Stick insects had been often overlooked as composition is usually difficult. However, this one had a remarkable fluorescence! 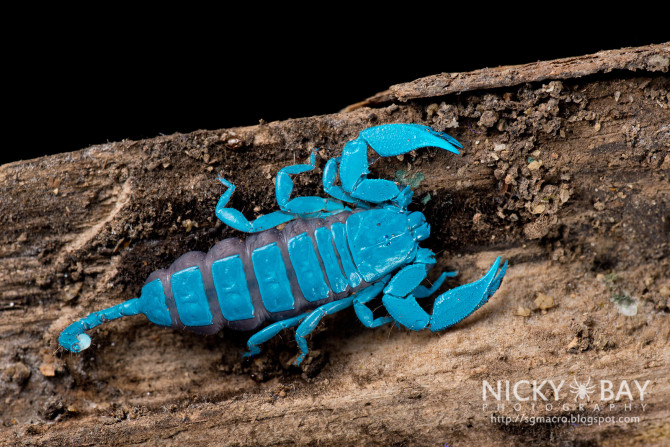 Scorpion (Liocheles sp.). Classic fluorescence that everyone else is familiar with! The fluorescence from scorpions is much brighter than that from other arthropods, making them much easier to shoot for beginners. 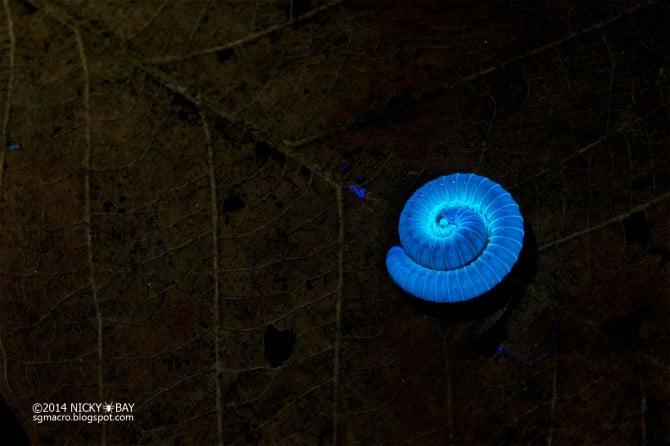 Millipede (Diplopoda). Only some millipedes fluoresce. This was the brightest fluorescence that we had ever seen on a millipede.

« Want to Be A Professional Photographer? Here are 8 Photos To Learn This Year
Pixel Peeper Let’s You Preview Photos Taken With Various Cameras, Lenses, And Exposure Settings Before You Buy »