I typed the title for this article hours ago. After typing it, I spent an hour answering emails, having a snack, watching a little TV, and checking up on friends and family in Israel. For a full hour after all of that, I stared at a blinking cursor. Taunting me. Vexing me. Daring me to write something meaningful. My wife just came into the office to see if I needed anything. She read the title from over my shoulder and asked, “Don’t you mean the photo you regret NOT taking?”

It’s a valid question. After all, in a world where I at least have my iPhone with me all the time, there is always a camera at hand. It may not always be a perfect shot, but I shouldn’t have too many regrets about photos not taken. “No, the title is right. It’s about the photo I regret taking.”

“This should be interesting,” she said, pulling up a chair. “Tell me about it.”

The Bridge to Nowhere

In downtown Atlanta, there is a bridge that– quite literally– goes nowhere. Originally built in 1912, what had been part of a major thoroughfare into the city’s banking and commercial district is now a span of 100 feet that abruptly ends at a pathetic excuse for a chain link fence. Beyond the fence is a drop of at least 40 or 50 feet. After being rendered useless several years ago, the bridge has become a haven for many of the city’s homeless population, although the dirt, garbage, and crumbling structure might make “haven” a poor choice of words.

This is the scene of the photo I regret taking. 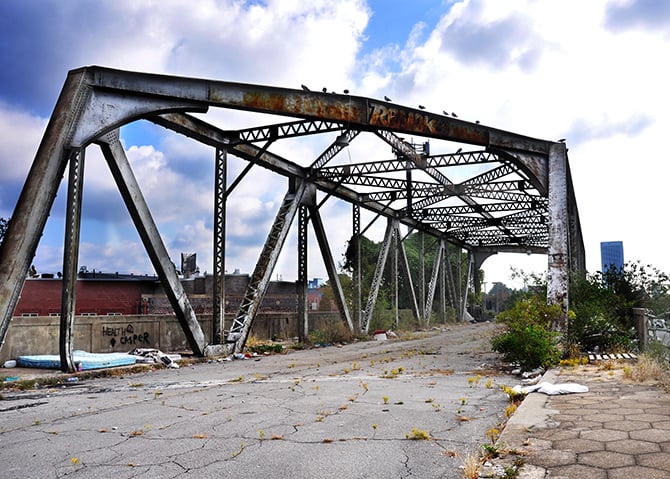 The Bridge to Nowhere.

Like a lot of photographers, I find myself drawn to abandoned buildings and urban decay. Colors and textures– along with juxtapositions where past and present collide– speak to me. While I know some photographers for whom it’s all about the challenge and the rush of getting inside, for me it’s about the stories these places could tell if only they could talk. I still mostly shoot film when I’m doing street photography, and I knew that the Bridge to Nowhere was definitely a spot that I needed to see for myself through lens of my dad’s old Pentax.

I took a drive down to the bridge on a cold October morning about four years ago. I’d heard that a lot of homeless people make the bridge their home at night, so I waited until mid-morning when I figured most would have cleared out for the day. I encountered one man walking off the bridge as I was walking on and we stopped to talk for a few minutes. It was going to be a good day, Reggie said. This was the day he was going to grab the world by the balls and turn things around. I gave him a few bucks for a hot breakfast. Nobody should have to grab the world by the balls on an empty stomach. 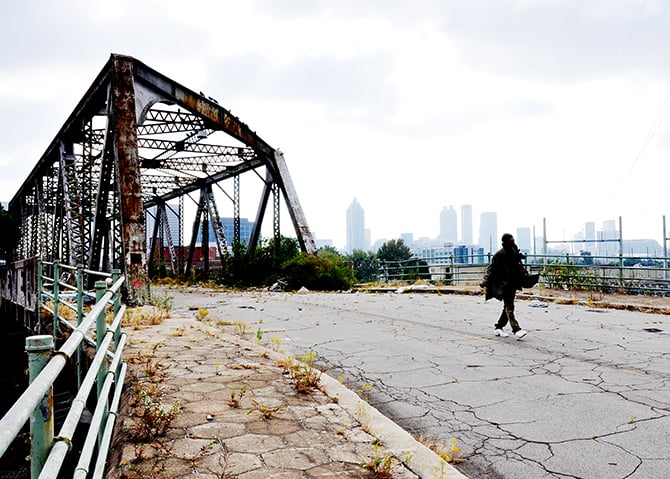 Reggie on his way to conquer the world.

The Photo I Regret

I had the bridge to myself after Reggie left, so I took my time checking it out. I was blown away. By the garbage. By the dirty mattresses. By the smell. By its proximity to golden skyscrapers containing the offices of some of the biggest banks in the world. Just blown away. No other way to describe it. I shot the skyline. I shot the graffiti. I even shot the garbage. As I neared the end of the bridge, I got down on my knees to shoot the fence– and the nothingness that lay just beyond it.

It was then I noticed that I wasn’t alone on the bridge after all. 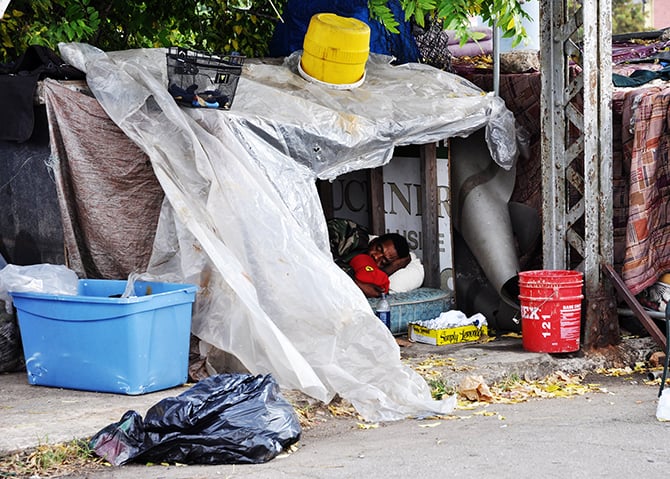 The photo I regret taking.

I actually felt my heart break when I saw him. I remember thinking that nobody should have to live like this. To take the shot or not to take the shot? That was the question. Or should have been. I think the fact that I only shot one frame and quietly withdrew speaks to the fact that I wasn’t completely comfortable taking the photograph. But I did take it, and I’ve regretted it ever since.

Why I Regret Taking It

I’ve never been able to shake the feeling that in some small fashion I took something from him that day. I know that even now in the 21st century there are cultures in the world that believe you take away part of a person’s soul when you take their picture. I certainly don’t agree with that philosophy, but I don’t judge it either. Being a street photographer, I obviously have no qualms about taking photos of people going about their daily lives without their knowledge or permission. So, why is it that almost four years later I still don’t feel right about taking this photo?

I’ve had a few theories on this since that chilly October morning. The first lies in the overriding, in-your-face symbolism of the image. Here is a photo of a man sleeping on a filthy mattress in a cardboard box at the very edge of a street that is literally going nowhere. A dead end. If hope was looking for a place to die could it be right here on this abandoned, century-old slab of concrete? And if the gentleman in this photo does have any hope left, have I somehow cheapened it with my intrusion? If not hope, what about pride? This man lives on the precipice of a man-made cliff. Surely not by choice, so what brought him here? What sort of failed dreams and aspirations brought him to this particular edge? These are a few of the questions that swirl around in my head whenever I come back to this photo.

The big question in my mental tug-of-war, however, is this: By taking this photo– by freezing this desperate, depressing moment in time– have I somehow given it a degree of permanence? Even if by some miracle his story has a happy ending, have I somehow tarnished that story by creating a permanent record of this particular chapter? 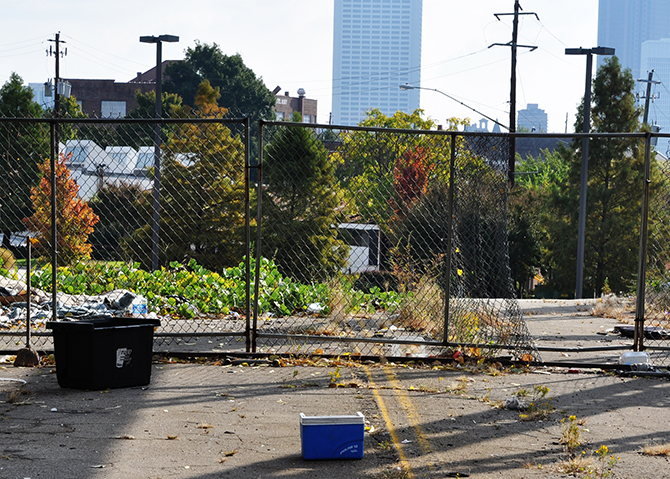 At the edge of the cliff.

I realize some will feel that I am WAY overthinking this. They may be right. There are times when I feel that way myself. Other times I’m not so sure. What I do know, however, is that we have the ability to tell some incredibly powerful stories with these light-capturing boxes we carry with us. Does that necessarily mean that every story should be told? I don’t know. It’s not for me to say. What I do believe is that we sometimes need to take a moment and think about the images we are about to capture. At least I do. From the moment I lifted the camera to my eye, composed, focused, and snapped, no more than three or four seconds could have passed. Would I have still released the shutter– and still regretted it– had I taken an additional second or two to think about the subject and his circumstances?

What about you? Have you ever regretted taking a photo? Tell us about it in the comments.

Photos are all Copyright Guyer Photography. All rights reserved.