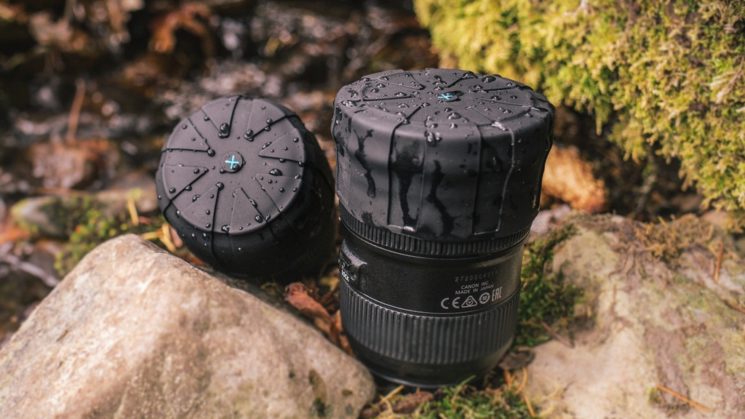 How many times have you lost a lens cap? It’s probably one of the most common items to lose, and KUVRD is designed to protect your lenses and always be there. This universal, stretchy lens cap fits any lens, protects your lenses from moisture and dirt, and unlike regular lens caps – it doesn’t fall off easily.

KUVRD is a lens cap made of silicon. It stretches over your lens and does not only cover the front, but also the sides of the lens. Since it’s stretchy, it can fit any lens you may have in your gear bag, and it won’t fall off. It stretches from 60mm to 150mm.

In addition to being universal and holding tight to your lens, KUVRD also protects the lenses from moist and dirt, and it’s also shock-proof. Its universality stretches (pun not intended) beyond only protecting lenses of all sizes. You can also use it both as a front and a rear cap. If you want extra protection, you can stack multiple caps on top of one another.

Last but not the least; since KUVRD is made of silicon, it’s moldable and fits any space. So, it won’t take up too much space in your gear bag.

KUVRD is currently available on Kickstarter, and it has earned $113,610 so far, which is 45 times their original goal. If you pledge $30 or more, you’ll get one KUVRD lens cap, but they’ll send one for free if you share their campaign on your social media. So it’s basically $15 for one lens cap. The estimated beginning of production is the beginning of 2018, and shipping worldwide begins around May 2018. if you want to learn more about the product and available rewards, visit their Kickstarter page.

[Kickstarter via No Film School]

« Do NASA astronauts shoot raw? The challenges of photography in space
52 Week Photography Challenge for 2018 »