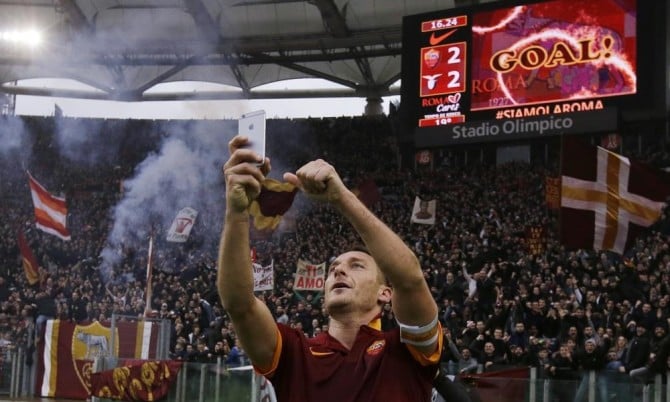 A.S. Roma of the Italian Serie A scored two goals to make an impressive comeback in the country’s most passionate soccer derby. Their indisputable star scored both goals becoming the joint top-goalscorer in the history of the Rome derby, but none of that will be remembered.

One moment will be remembered from that match – the moment Francesco Totti celebrated with a selfie.

Several sporting events have been commemorated with the winner or winning team taking a victorious selfie. Yesterday, however, we saw what was probably the first mid-game celebration-selfie in any of the top European leagues, as Roma’s captain entered the record books.

Immediately after scoring the magnificent equalizing goal, the 38-year-old captain was handed his phone, with which he captured a selfie with the rejoicing fans.

Totti is not known for taking selfies, but he decided to make an exception in this case.

“I thought about it during the week. There is this fashion for selfies now and I like to keep my private life to myself. But this was a unique opportunity that would never be repeated. It was my phone and I asked Guido Nanni to bring it to me if I scored.”

Riding the coattails of Totti’s extraordinary selfie, A.S. Roma has posted the selfie on their social media pages. 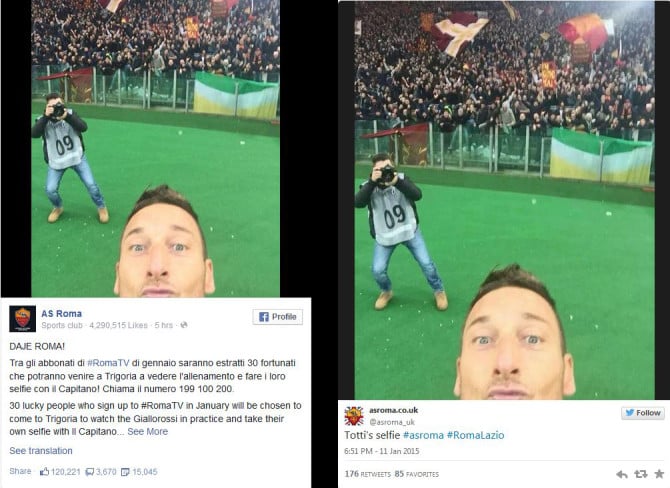 The photo was posted on Facebook giving fans an opportunity to have their own selfie taken with the captain at one of the team’s practices:

Totti was not the first soccer player to celebrate a goal with a selfie, however. Dom Dwyer of MLB’s Sporting Kansas City marked a goal back in July by taking a selfie. Unlike the Italian, though, Dwyer was shown the yellow card.

The question now is who will be the first sportsman to celebrate with a belfie?