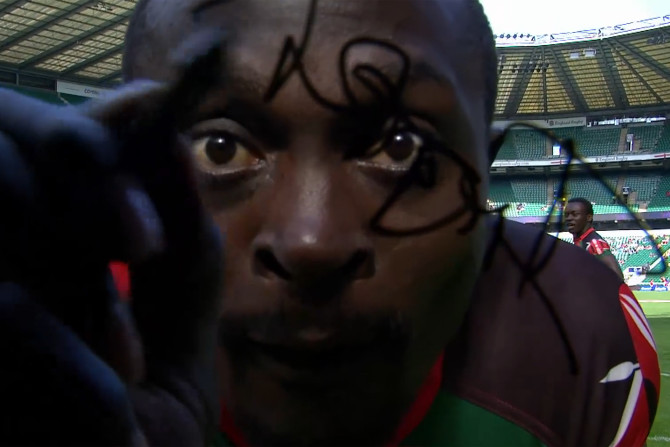 Getting an autograph from your favorite sportsman will easily become the highlight of the game for you, and if the autograph was given on the day of a memorable event it might even be worth some money.

The problem – most autographs aren’t worth $94,000, which is roughly the price of the lens ruined by Kenya’s rugby player Collins Injera.

Injera had planned to celebrate by signing the ball, but on the spur of the moment he headed over to the cameraman and gave the viewers at home an autograph as well.

The unfortunate event took place during a rugby World Seven Series match, when Injera celebrated scoring his 200th try wearing the national jersey. Our American readers might be deceived by the term ‘try’ – It’s actually a successful move, analogous to a touchdown.

As can be seen in the video, the player had awaited the moment as he had a permanent marker tucked in his sock. Once he scored the try, he took out the marker and signed the ball that had entered his personal hall of fame. Next thing you know, he was signing the TV camera’s lens.

Obviously Injera didn’t intend to cause damage to the lens; he most likely just followed the footsteps of tennis and NFL players who will sign an occasional lens. What Injera’ didn’t take into account, however, is that his fellow sportsmen sign a protective cover and not the actual lens.

Perhaps sportsmen should rather follow in the footsteps of Italian soccer star Francesco Totti, who celebrated a record goal by taking a selfie.

[via ESPN via Fstoppers]