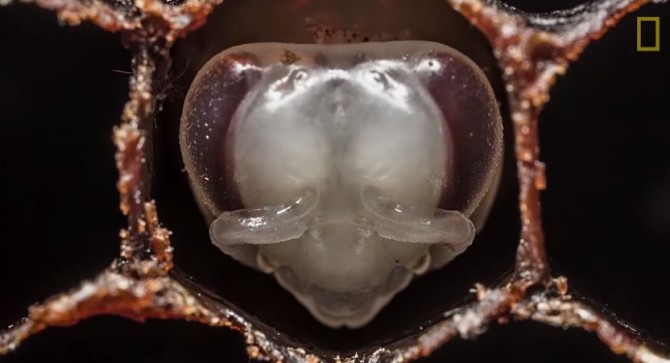 We all have this primal fear of bees. And while bees are generally a peaceful bunch, something about the buzz, furry appearance and the notion of a sting just hammers my head when I see one.

If that was not enough to keep one sleepless photographer Anand Varma did a 78 seconds time lapse video showing how a bee transforms from egg to larva to adult. The kinda of stuff nightmares are made of.

The photos and time lapse were commissioned for National Geographic’s May issue, but took months to make.

At first Anand placed a beehive at his workshop. He modified the hive to have some transparent windows and shot through them. But while this process helped Anand in understanding how to shoot bees, he was not getting where he wanted with the photos. The stills did not capture what Anand wanted most, the egg to bee transformation.

The next step was to place a small piece of the hive in a huge incubator and capture the bees while allowing them to maintain their normal life:

… The lab had a refrigerator-size incubator that could match the perfect conditions for honeybee development—including the temperature and humidity levels inside a capped cell. This way, when worker bees would cap a brood cell, Varma could cut away the capping without harming the bee’s development. He set a small piece of brood comb in the incubator, and rigged up a contraption that would allow his camera to photograph the same cell for a week at a time.

It took several attempts over six months to get the footage right but once captured it is a rare and intimate look to one of nature’s miracles.

Photographing a mosquito hatching from its pupa

« How Richard Prince Sells Other People’s Instagram Photos for $100,000
Rugby Superstar Celebrated by Ruining a $94,000 Lens »