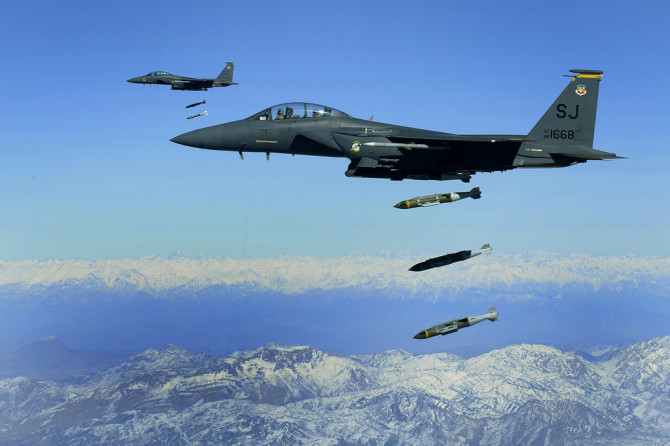 Modern armies have endless amounts or rules and regulations set in place, some more out there than others, but most have been implemented following a rather bad situation.

One of the very basic rules is that army info stays in the army; you don’t share it, especially when it comes to operational information. Once upon a time this meant you weren’t allowed to talk about anything secretive with friends, but nowadays efforts to maintain military secrets focus heavily on social media.

Being a fairly new militant group, ISIS (or ISIL or Daesh, whatever they’re calling themselves this week) is still learning its lessons the hard way as was revealed a couple of days ago.

It turns out that one of the ISIS guys thought it would be cool to take a selfie outside one of the group’s secret headquarters and share it on social media. Well, the United States Air Force thought it was pretty cool as well…

The story came out on Monday when Air Force General Hawk Carlisle, head of Air Combat Command, said the following at a Washington D.C. breakfast meeting:

“The guys that were working down out of Hurlburt, they’re combing through social media and they see some moron standing at this command. And in some social media, open forum, bragging about the command and control capabilities for Daesh, ISIL. And these guys go: ‘We got an in.’ So they do some work, long story short, about 22 hours later through that very building, three [Joint Direct Attack Munitions] take that entire building out.”

“It was a post on social media to bombs on target in less than 24 hours,” Carlisle added. “Incredible work when you think about.”

Very impressive work indeed, General, but I’m not quite sure why you’d go ahead and share that information?

I don’t have any contacts in ISIS, but I’m willing to bet another regulation has just been added to the training manual.

Anyway, there weren’t too many additional details revealed about the airstrike, but considering the amount of fatal selfies taken last month, I wouldn’t be surprised if the selfie was shared in the last few weeks.