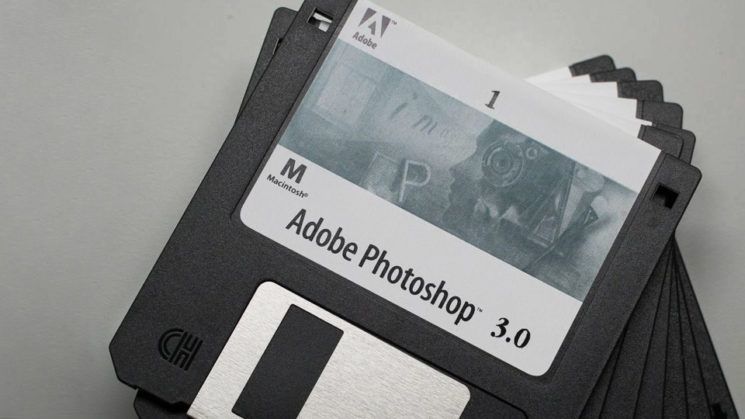 Photoshop version 3.0 was the version that introduced me to Photoshop. It came out at the end of 1994, and I discovered it the following year while in college. I had no idea what I wanted to do with it at the time, but it was still amazing. I’d never seen anything like it, and I wanted to learn all about what it was and what it could do.

I saw an image scroll up my Facebook feed today that Adobe posted way back in 2013. It was the picture below, with the note that the version of Photoshop CC available at the time would require 733 floppy discs. Today it would probably be closer to 2,000. But how does Photoshop 3.0 stack up against its future selves?

Photoshop 3.0 was the last version of Photoshop to be sold on the floppy disc. If Photoshop were sold on floppy discs today, it would need to be installed with 733 discs!#throwbackthursday #TBT

When I got Photoshop 3.0, it was a heavily discounted educational license through college. It came on a stack of several floppy discs and once installed on my PC, it was glorious. It flew on my beasty 486 DX2/66 with its 8MB RAM.

Today, the system requirements for 64Bit Photoshop CC 2017 state the need for 3.1GB of space. That means it would require anywhere up to around 2200 3.5″ floppy discs. On CD-ROMs, you’d only need half a dozen, or it could all still fit nicely on a DVD.

It’s incredible just how far along the software has come in that time. Photoshop 3.0 (1994) was probably the first massively impactful version of Photoshop, as it introduced layers. A fundamental tool for digital artists everywhere. Many traditional artists and animators had been used to this for decades in the form of acetate sheets.

Photoshop 6.0 was the version I was still using in 2002 when I picked up my first pair of Nikon D100 bodies. It had no native support for Nikon’s NEF raw files at all. Everything had to be brought in by a proprietary Nikon plugin. It was painful, but it worked.

Photoshop CS also introduced some basic copy protection. It detected and refused to print scanned images of various bank notes from around the world.

The CS5.1 update that came out the following year introduced the subscription model pricing. This was the beginning of the end for many existing users. But also the start of something wonderful for those that would never have become Photoshop users in the first place.

Since switching over to the cloud subscription model, Photoshop has seen many significant feature additions. Camera Shake Reduction, Intelligent Upsampling, Camera RAW as a filter to name just three that came with the first release. Then Smart Objects got a significant upgrade with Linked Smart Objects. Now you could reference external files. Fantastic for collaborations. 3D printing support was added, and the Mercury Graphics Engine support was expanded. stacking layer styles and so much more.

If Adobe had stuck with its original naming convention, we’d be on version 18.1.1 right now.

Things sure have come a very long way. It’s hard to remember now just how incredibly advanced Photoshop 3.0 seemed at the time.

What’s been your favourite feature or addition to Photoshop over the years?