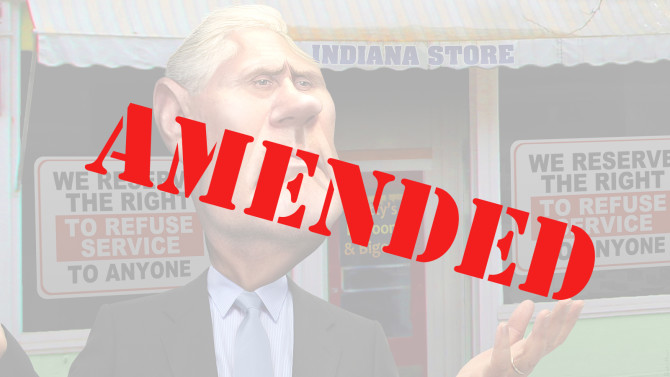 The state of Indiana recently approved a law allowing businesses to decline same-sex clients. Bill supporters promoted it stating that “Christian bakers, florists and photographers should not be punished for refusing to participate in a homosexual marriage!”.

Prior to signing the amendment Indiana governor Mike Pence continued to protect the law claiming it is identical to the 1993 federal religious freedom law.

White House press secretary Josh Earnest said Pence and other state officials are in “damage control mode”, and debunked the governor’s lies about the similarity between the two laws.

The following day an amendment was approved by Indiana’s House, Senate and governor, though not without resistance.

While this law did not refer solely to photographers, the only court case of a business being sued due to a state-level religious freedom act was against a photographer.

In his daily press briefing held on April 1st, Earnest attacked Governor Pence and called out his lies about the law:

“I know that Gov. Pence has tried to falsely suggest that the law that was signed in Indiana is the same as the law that was passed at the federal level in 1993. That is not true, and the reason that that’s not true is that the 1993 law was an effort to protect the religious liberty of religious minorities based on actions that could be taken by the federal government.

The Indiana law is much broader. It doesn’t just apply to individuals or religious minorities. It applies to, and I’m quoting here, ‘a partnership, a limited liability company, a corporation, a company, a firm, a society, a joint stock company, or an unincorporated association.’ So this obviously is a significant expansion of the law in terms of the way that it would apply”.

After debunking Pence’s claim that the state and federal law were identical, he moved on to address the Governor’s statement that the Indiana law applies only between government agencies and civilians:

“At the same time, it is also worth noting that the law in Indiana doesn’t just apply to interactions with the government. It also applies to private transactions as well, which means that this is a much more open-ended piece of legislation that could reasonably be used to try to justify discriminating against somebody because of who they love”.

The following day Indiana’s House and Senate both approved fixes to the RFRA ensuring it “does not tolerate discrimination against any class of Hoosier”.

Despite this amendment, the substantial opposition it faced as well as the fact that the governor held the original law signing in a private ceremony and refused to publish the names of the participants, could lead one to believe that the changes were made due to the immense civil, legal and economic backlash rather than an actual desire to protect the LGBT minority.

It is my understanding that the Democrats opposed to the fix as well claiming the suggested amendment is not sufficient.

This move also comes after it was revealed that some of the signing ceremony attendees and supporters were known anti-gay activists.

Eventually the Indiana House approved the changes 66-30 and the Senate followed suit with a 34-16 vote cast.

Despite the RFRA clarification, democrats and legal experts claim the fix does widely extend discrimination protection for LGBT.

Read our previous coverage of the law for more background info.

[via PoliticoUSA and The Indianapolis Star| Lead image based on: DonkeyHotey]

« Photographer Reportedly Says “Sue Me” After Being Accused Of Printing Racial Slur On Wedding Photos
Magic Lantern Puts Linux On EOS Cameras. Could Be Developer’s (and filmmakers) Heaven »