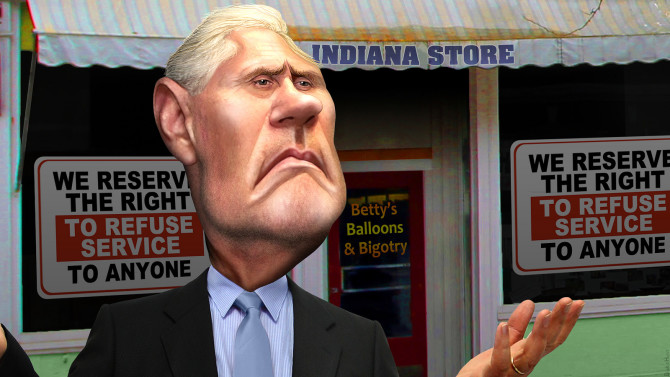 “Christian bakers, florists and photographers” were given as examples of businesses that are said to benefit from the new law, adding that they “should not be punished for refusing to participate in a homosexual marriage!”.

Opponents, however, claim the law will legalize discriminations against homosexuals.

Below is part of Senate Bill 101 as it was submitted to the Indiana general assembly, and signed by the governor today:

The bill was modeled on a 1993 federal law that passed with bipartisan support, called the Religious Freedom Restoration Act, or RFRA. The law was intended to protect religious minorities when a federal law impeded their religious practices, and 19 states have since adopted similar legislation.

However, it seems that social conservatives in Indiana have taken the law in a completely different direction. Instead of the law protecting the LGBT minority group, albeit not a religious one, it was promoted as a means for the majority to discriminate against the minority.

Conservative Christian groups have been pushing for the bill to be passed since last year’s failed attempt to ban same-sex marriage in Indiana’s constitution, and the court’s decision to effectively legalize it.

Senator Scott Schneider, one of the bill’s three authors, confirmed the bill will protect Christian business owners from being punished, as described above.

Shortly after signing the bill, Pence defended the new law and denied it being a consolation prize for conservative groups following their previously mentioned failed efforts to ban same-sex marriage in Indiana.

“I think there’s a lot of misunderstanding,” said the governor, adding that the law “has never undermined anti-discrimination laws”.

Pence mentioned in his speech that the federal law was signed by then-President Bill Clinton and other top Democrats, though he failed to mention that the motive behind the 1993 law was very different than that of the conservative supporters who rallied for Bill 101, or the author’s clear statement on the same matter. He also reminded that President Barack Obama supported a similar law when he was an Illinois legislator.

While I tend to take any politician’s word with a grain of salt, Pence provided further reason to question his motives to sign the bill. During the news conference following the signing of the law, a reporter asked the governor if he thinks sexual orientation should be a protected class (same as race, religion, color, sex and national origin) and if he would support matching Illinois by adding it to the state’s civil rights law. His response was “That’s not on my agenda. I won’t be pursuing that”.

While the signing of the bill was closed to the public and the press, it was reported that 75 to 80 people, all supporting the bill of course, had attended the private ceremony.

It is also reported that during the ceremony, which took place in the governor’s Statehouse office, the press was even asked to leave the waiting area and that the governor’s office declined to provide a list of the people who had attended. Not the most trust-inspiring move if you ask me.

“This bill is not about discrimination, and if I thought it legalized discrimination in any way in Indiana, I would have vetoed it,” said Pence in a statement. “In fact, it does not even apply to disputes between private parties unless government action is involved. For more than twenty years, the federal Religious Freedom Restoration Act has never undermined our nation’s anti-discrimination laws, and it will not in Indiana”.

“We are deeply disappointed that the governor and state lawmakers have been tone-deaf to the cries of legions of Hoosiers—including businesses, convention leaders, faith communities and more than 10,000 people who signed petitions against the bill—who say they don’t want this harmful legislation to impair the reputation of our state and harm our ability to attract the best and brightest to Indiana”.

Pence might have a point there, though, much to the disappointment of the bill’s supporters. As sixteen legal scholars stated in a joined letter to the Senate’s Judiciary Chairman, “it is not at all clear that the proposed Indiana RFRA would lead courts to recognize such an exemption”. They were referring of course to businesses being exempt from offering their services to same-sex couples.

According to the Indianapolis Star, there has only been one case discussed in court in the 19 states that already have a religious freedom law. A Christian wedding photographer from New Mexico was sued following his refusal to photograph a same-sex commitment ceremony. The photographer lost the case, despite the state’s RFRA.

“Opponents of the legislation may make unsupported claims about the extreme results that it would produce, but they have no examples of judicial decisions actually reaching such results,” added the legal experts in their letter.

“There’s been exaggeration on both sides about what this law would do in particular settings”, said Daniel Conkle, a law professor at Indiana University and one of the letter’s authors.

While that might be the case, and the judges’ role in religious freedom laws is being overlooked by both sides, this law leaves a bad taste in one’s mouth due to the intentions of its authors and supporters.

Proving that intentions (even if they won’t end up being supported in court) carry just as much weight as the law itself, gaming convention Gen Con threatened to pull its convention, and its estimated $50 million economic impact, out of the state should the governor decide to sign the bill.

After the bill was formally signed, George Takei posted the following message on Facebook:

“I am outraged that Gov. Pence would sign such a divisive measure into law. He has made it clear that LGBT couples, like Brad and me, are now unwelcome in his state. The notion that this bill was not driven by animus against our community is belied by the record and frankly insulting. I will join many in demanding that socially responsible companies withdraw their business, conferences and support from his state and that LGBTs and our friends and supporters refuse to visit or do business with Indiana. It is a sad day for the Hoosier state, and indeed for the many good people of Indiana, for whom this law now stands as a terrible blight upon that state’s reputation”.

Salesforce CEO Mark Benioff was quick to follow, writing on Twitter that “Today we are canceling all programs that require our customers/employees to travel to Indiana to face discrimination”.

The NCAA, whose Final Four will be played this year in Indiana, and PayPal co-founder Max Levchin were also amongst those who raised their concerns over the new law.

Despite Indiana photographers now being “protected”, hopefully none of them will feel the need to take advantage of the new law.