The reaction I’ve gotten from people watching my latest #shotonaniPhone Photowalks video episode has been across the board.

“What camera did you use to shoot this? It looks amazing.” That was the first comment. My sentiment too.

This is related to the one key new feature of the latest iPhone, which is “Cinematic Mode.” It allows the photographer to blur the background as we do in Portrait Mode for iPhone stills, or by shooting with a small F stop on our cameras.

In iPhone land, on the four new iPhone 13 models, the blurred effect is produced by computational photography.

I shot the entire 24-minute Photowalk in historic Savannah Georgia on the iPhone, with most of the shots in beautiful, blurry background rich Cinematic Mode.

“Sorry to say, but cinematic mode looks more like green-screen to me,” was another of the reactions my video produced.

Let’s face it, when Apple introduces something new, the results rarely live up to the breathless hype of the demo launch. Remember Portrait Mode in the beginning? It was good, not great, more gimmicky to me than something I wanted to use on a day-to-day basis.

You could see the blur bleeding onto the ears and the edges. It would work on some images, look laughingly bad on others.

But now I use Portrait Mode all the time. Because Apple refined it and made it way better. All those endless software updates really do pay off. The blur now looks natural.

For my money, I’d give Cinematic Mode a B+ at launch. It worked more often than it didn’t. 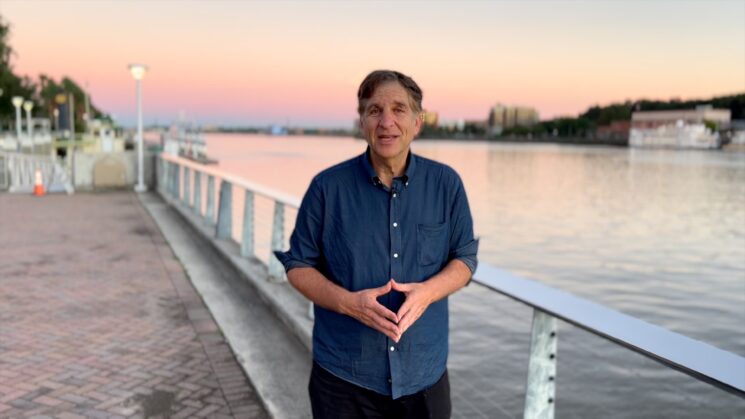 Shots in good light always perform better, so far, while it struggles in poor light. What else is new?

Sometimes it struggles to find focus, or tells you there’s not enough light for the shot, and that we should switch to flash. For a video tool?

I shot a wedding this week and pulled out the iPhone 13 Cinematic to shoot the details. Yeah, my Sony A7III with the $2,500 24-70mm 2.8 lens was there, but it was so convenient to just pick up the light iPhone, put it on a grip, and weave in and out to grab the pretty flowers and such. And when I tested it against the Sony, I was happier with the blur on the iPhone than the Sony.

For the details, anyway.

But once the reception started, I had to switch (because I would have anyway!) to the Sony for faster focus and real zoom. (My client would have been furious to have the entire wedding on an iPhone!)

Two or three years from now, who knows, maybe we can do the entire wedding on an iPhone.

Back in Savannah, shooting the Spanish moss dripping from the trees, the Victorian homes that date back to the 1800s, the horse carriages puttering through town, the fountains and interviews with folks at parks, restaurants, and an old motel, I saw very little drawback to using the iPhone over a traditional camera.

Okay, I wish there was a way I could check my audio levels while recording, have a headphone plugged in to monitor the recordings, and have more accurate focus tools.

But come on folks I shot an entire episode of a program on a cellphone camera. And I think it looks pretty good.

So consider me amazed at the results.

Report: iPhone 13 will have portrait video mode and 4K video
« Tamron can’t keep up with the demand of the 18-300mm f/3.5-6.3, delays shipping indefinitely
Fast Stacker 2.0 is an automated focusing rail for macro photos you can build yourself for $180 »