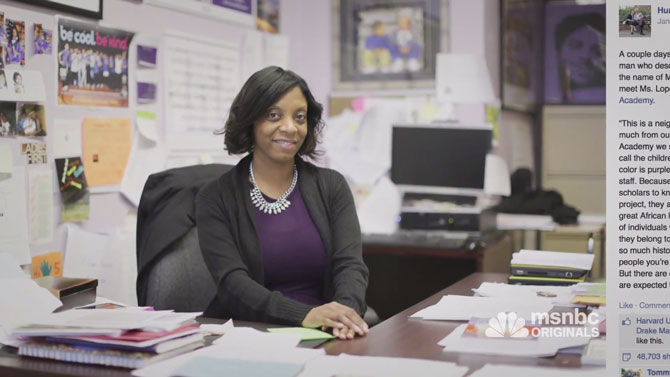 By now, we’ve everyone is pretty much familiar with Humans of New York. The wildly popular project has nearly 12,000,000 followers on Facebook alone. And this month, Brandon Stanton, the man behind it all, is using his project’s widespread popularity for a good cause. After taking a portrait of a Vidal Chastanet, and eight grader living in a notoriously rough neighborhood in Brooklyn, Stanton asked the student who his biggest influence in life has been. The boy explained to the photographer how his school’s principal Nadia Lopez, is not only a positive influence to himself, but to all the students of Mott Hall Bridges Academy.

“When we get in trouble, she doesn’t suspend us. She calls us to her office and explains to us how society was…” pic.twitter.com/JmHwOcgkXl

Upon posting Chastanet’s portrait on the Humans of New York social media accounts, the story began going viral, moving Stanton to turn the attention into something positive. After visiting the school and meeting principal Lopez, Stanton set up a crowd funding campaign to help raise money to send the students on a trip to visit the campus of Harvard University.

Needless to say, the campaign exceeded the initial goal of $100,000. Within days it exceeded $700,000. At that point Stanton announced any further funding raised above the $700,000 mark would go to establish The Vidal Scholarship Fund. Each year a new recipient will be chosen to receive the reward with the first recipient being the scholarships namesake, Vidal Chastanet. They have since raised over $1,100,000 with over a week left on the campaign.

« Canon’s 50MP Camera Specs Leaked. Could It Be Lacking Video?
Fuji Made A Website That Lets You Test Drive Their Lenses At All Their Different Apertures »