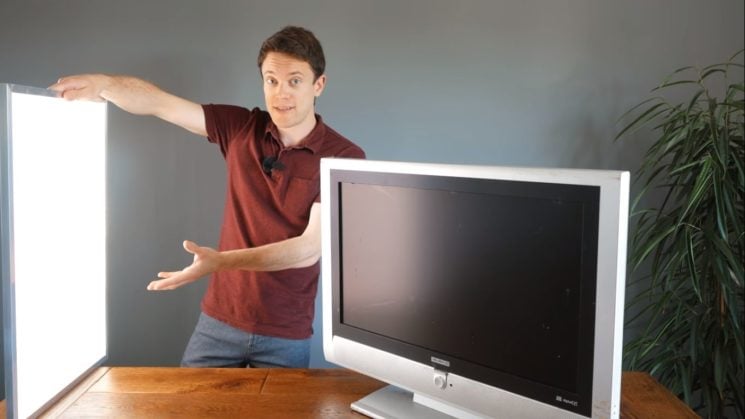 One of the things I love the most about DIY projects is that they can give a new life to the items that are destroyed beyond salvation. In this video, Matthew Perks of DIY Perks will show you how to repurpose a broken LCD TV or monitor and turn it into an amazing LED light panel. It almost perfectly simulates daylight, and it’s useful for photographers as well as filmmakers.

LCD monitors and TVs make great daylight LED panels because they make the light seem as if it’s shined from further away. The main reason is a fresnel layer which sits inside these monitors. Matthew explains that this construction enables reduced light falloff, so the items placed further away from the light source still get illuminated pretty well.

Here’s what you’ll need for this project:

Lay the monitor down flat and unscrew all screws on the back. When you take down the plastic cover, you’ll have to unscrew all screws from the inside and carefully remove all metal components and electronics. Be careful though and don’t touch the boards, as they may still be some power left in the capacitors. Separate everything into groups of electronics, plastic, and metal, so you can take it to the recycling center. You’ll also need to remove the LCD panel until you’re left with the backlight panel itself.

The backlight panel will usually have a diffusion layer, a Fresnel layer underneath it, another diffusion sheet, and an acrylic back panel. All these are pretty useful for your LED panel, but you’ll have to take them out temporarily.

Now that all the layers are out, you have the metal frame of the backlight and its native light. Newer models contain LED strips, but in the older models, you might find small CCFL bulbs.

When it comes to powering your soon-to-be LCD panel, you have two options. You can leave the native LCD strips or CCFL bulbs, but Matthew warns that it can be pretty dangerous if you don’t know what you’re doing. The electronics with these is pretty complicated and they work with rather high voltages. Matthew’s preferred option is to remove them and add your own high-CRI LED strips. They often come with an adhesive back so they’re very easy to set up. And if you first have to remove the CCFL bulbs, make sure to di it carefully because they contain mercury.

When you’ve added the LED strips, it’s time to put back the original layers of the panel. Start with the acrylic, add the first diffusion sheet, the Fresnel layer, and finally the last diffusion sheet. Put the original frame on top of everything. In case it doesn’t fit anymore due to the LED strips, you can simply use gaff tape instead or make your own frame out of metal. This makes your DIY LED panel done, and now you just need to extend the wiring and add a power socket.

The light from this LED panel looks soft and pleasing, and I think it could be great for many different kinds of photography or video. So, if you have a broken TV or monitor lying around – don’t just throw it away, but turn it into something awesome.