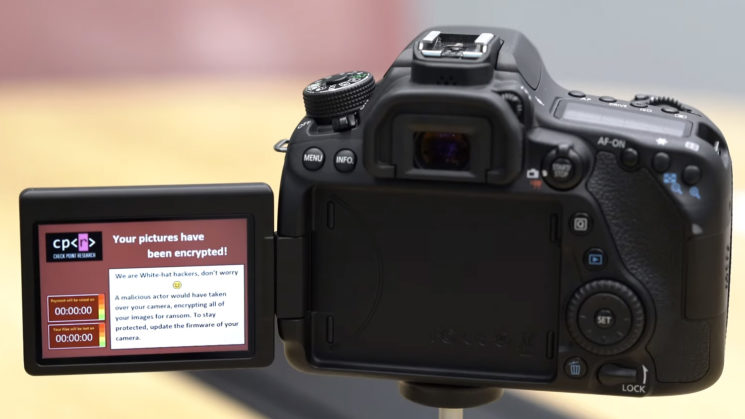 The vulnerability was discovered by Check Point Software Technologies, Ltd. They used information from the Magic Lantern forums in order to open up the firmware and uncover the flaws.

Essentially, as demonstrated in the above video, the exploit would allow an attacker to break into the camera’s file system on the SD card over WiFi and encrypt the user’s files. It then displayed a message on the screen stating that the files would be unlocked after a ransom is paid. Check Point says they notified Canon of the vulnerability back in March and the two companies have been working together in order to help resolve it since then.

Due to these vulnerabilities, the potential exists for third-party attack on the camera if the camera is connected to a PC or mobile device that has been hijacked through an unsecured network.

At this point, there have been no confirmed cases of these vulnerabilities being exploited to cause harm, but in order to ensure that our customers can use our products securely, we would like to inform you of the following workarounds for this issue.

Please check the Web site of the Canon sales company in your region for the latest information regarding firmware designed to address this issue.

The complete list of cameras is not mentioned on the global advisory, however, they are listed on an alert on the Canon UK website.

*1 If a WiFi adapter or a Wireless file transmitter is used, WiFi connection can be established.
*2 Ethernet connections are also affected by these vulnerabilities.

Firmware update information will be provided for each product in turn starting from products for which preparations have been completed.

So far, a firmware update for the Canon EOS 80D has been released to address the issue.

If you own one of the other affected cameras, you’ll want to keep checking back for new firmware updates.

« DJI to release “Mavic Mini” with 4K camera and 3-axis gimbal for $399, reports suggest
How to turn a broken LCD TV into a DIY LED light panel »