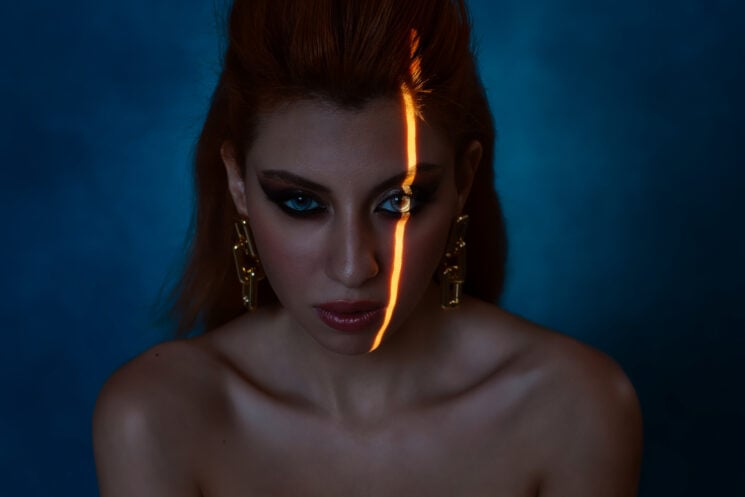 In the past months, I was obsessed with some photos of Karl Taylor showing a blade of light on a model’s face, and I wanted to give it a go on my own.

I had one problem, though. Typically, you make these shots using expensive strobe attachments, which allow studio strobe to control light in an exact manner. My problem was that I didn’t have any of those modifiers (or strobes), so I decided to replicate this type of photo with a projector made for speedlights – a device called Light Blaster from Spiffy Gear.

If you are not familiar with this modifier, it is pretty interesting, as it allows the use of 35mm slides to create unusual backgrounds. It can also accept metal gobos to create very accurate shapes with light. One side of the device takes a Speedlight, and the other side mounts a lens. The light shoots from the flash passes through the slide and is focused with the lens.

Sadly, the shape I needed, a simple thin slit, is not part of the set of gobos provided by Spiffy Gear. At first, I thought about creating a new metal GoBo with this shape, but then I realized that using a 35mm slide would have been much easier.

So I called my friend Alessandro, who owns a 3D printer, and asked him if it was possible to create a plastic print that would resemble the size of a 35mm slide – 5 cm x 5 cm. Also, if it could have a  2 cm by 1 mm slit. It was an easy print to make, and it was not a problem for him. One data later, I was holding a new custom GoBo-slide in my hands. 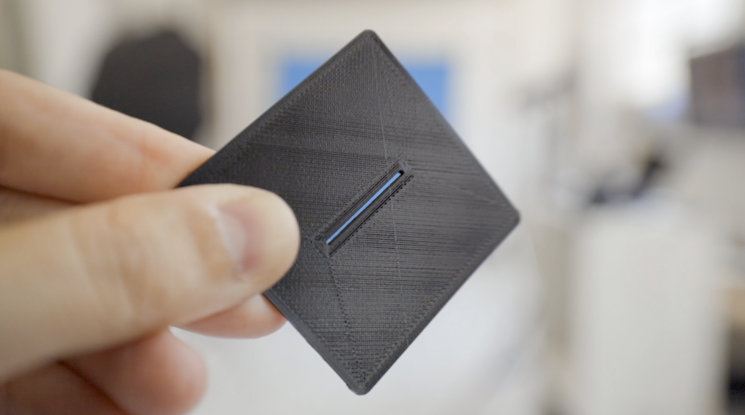 After having tried this combo at home, I was excited. Not only was the projection tack sharp, but the cost was also incredibly low. This is the actual slide I used to create the photos in this article.

I used the new custom-made gobo-slide with a Godox AD200 (I was hoping to use the modeling light on this flash, but sadly it was too dim for the studio where I was shooting). On the other end of the Light Balster, I used a Canon 135 mm f/2 L. I also used a Rogue CTO gel so that the blade of light would be orange. This was projected directly on my model’s face – Lynn Eldin.

On the other side, I placed a Godox TT685 with a 1/2 CTB gel mounted to a reflective brolly. This blue color set the mood and contrasted nicely with the orange slit. Next, I set the 685 to fire about two stops under “normal exposure,” creating a color cast and a very subtle fill. Finally, I used a Godox AD100PRO at a very low power setting to provide a kiss of light on the background and show some of the texture of the hand-painted backdrop. The picture below shows the behind-the-scenes with all the strobes’ positioning and power settings. 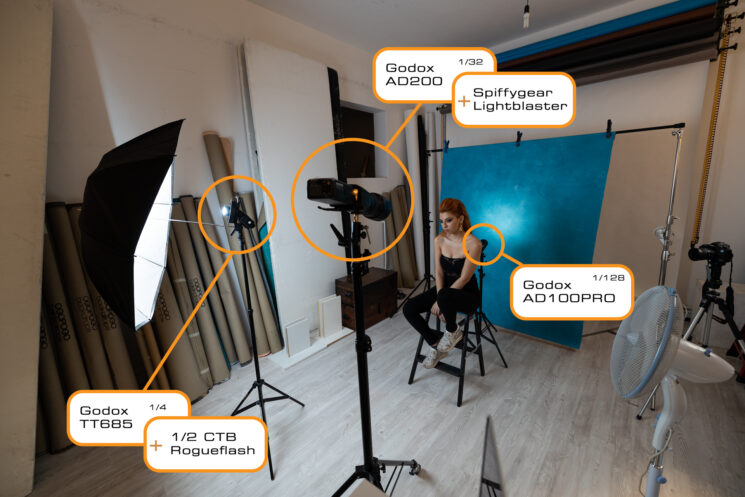 One of the nice characteristics of using a GoBo with a “real” lens is that you can get different effects by focusing or defocusing the front lens (the Canon 135 mm). I decided to defocus a bit to obtain a larger, softer blade of light. The setup did not change, but the effect of the light was different. In this second shot (aside from the B&W conversion), the blade of light was larger and its borders less defined. 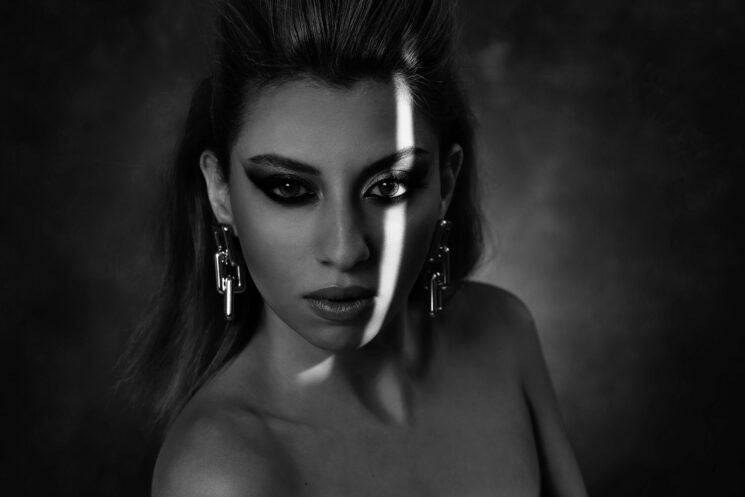 This was just the first test. Now that I know that it works, it is just a matter of creating new exciting shapes and printing them in 3D to use with the LightBlaster!

Stefano Tealdi is an Italian photographer based in Milan. You can see more of his Instagram.

Drone footage shows San Francisco actually looks like Blade Runner 2049 right now
« Here’s when, why and how to use flash for outdoor portraits in bright daylight
Sony FE 70-200mm f/2.8 GM OSS II lens images have leaked ahead of announcement »