Thanks to its infrared vision, James Webb Space Telescope can pierce through dust clouds and see further than any telescope has ever seen. As you may have read, it can take photos of the universe as it was over 13 billion years ago. But how far is that exactly? How far can Webb’s infrared camera see?

To help you put things into perspective, NASA has released a video that shows a fraction of Webb’s capabilities. It zooms all the way to the Cartwheel Galaxy, a gorgeous photo that the telescope recently took. 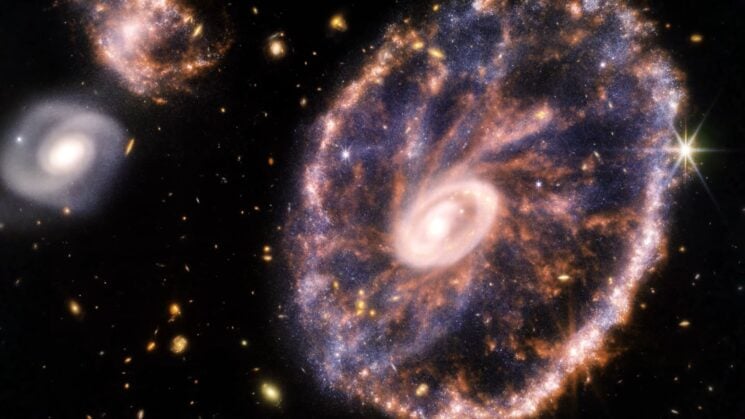 The Cartwheel Galaxy is located about 500 million light-years away from the Earth, in the Sculptor constellation. The video above takes you on a journey that zooms through space to reveal this beautiful galaxy. “This image of the Cartwheel and its companion galaxies is a composite from Webb’s Near-Infrared Camera (NIRCam) and Mid-Infrared Instrument (MIRI),” NASA explains, “which reveals details that are difficult to see in the individual images alone.”

Turn the lights up 💡

Check out the Cartwheel Galaxy as seen by @NASAHubble in visible light and Webb in infrared. Complimentary views from complementary telescopes! Download both images in full-resolution below ⬇️

Now, keep in mind that the Cartwheel Galaxy is “only” 500 million light-years away. James Webb also captured the oldest galaxy ever observed, estimated to be 13.5 billion years old. For comparison, The Big Bang is estimated to have happened 13.8 billion years ago. So, can you even imagine what else there is to see?