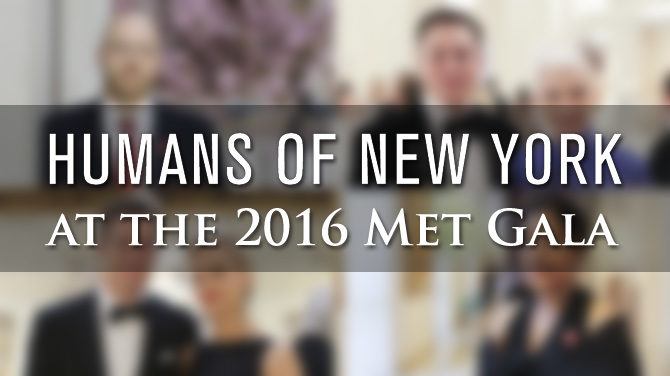 The Met Gala is an annual fundraiser for the benefit of the Metropolitan Museum of Art’s Costume Institute in New York City.  It marks the grand opening of their annual fashion exhbit, and each event celebrates the theme of that year’s exhibition.

As happens at such events, a few famous faces show up to have a mingle.  This year, Brandon Stanton of Humans of New York also went along to photograph some of them.

Far removed from the “Did you see what so-and-so was wearing?” type snaps we usually see at events such as this, Brandon puts his unique twist on some famous faces, and offers us a small insight into who they really are.

Obviously, not all of those attending the Met Gala are famous celebrities, but that’s one of the great things about the Humans of New York project.  No matter who you are, everybody’s equal in front of Brandon’s lens.

It also shows that regardless of how one may appear on the outside, what’s going on in the inside is usually far more intriguing, which is one of the things that has made the Humans of New York project so popular.

It’s an interesting perspective and certainly makes for a closer connection to the subjects than in the images often made at such events.  I hope it’s something we will start to see more of, whether it be from Brandon or other photographers, as the whole “reality show” style of celebrity photography started to get real old a long time ago.

You can read more about Brandon and his work on the Humans of New York website, and see the full gallery of Brandon’s most memorable encounters from the evening on Vogue.