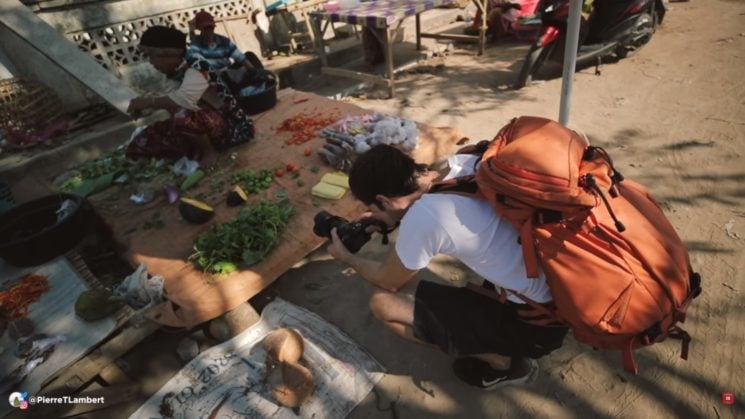 Street photography has always been an intimidating genre. It takes a lot of courage and the right approach to be successful at it. Thankfully, photographer Pierre Lambert has a few useful tips to help boost your confidence once you decide to take on shooting in the streets.

The very first subject the video tackles is the issue of whether you should ask for permission to shoot people or not. For the longest time, street photographers have been divided about this topic. However, Lambert makes it clear that he likes to ask for people’s permission because he respects their privacy.

In my opinion, this makes a lot of sense when you’re in a foreign country (he was in Indonesia when he shot the video). Since you may not be fully aware of all their customs and traditions, you’re better off just asking them if you could take photos.

Lambert also adds that it helps to learn how to say “Can I take your photo?” in their language. It not only helps you communicate with individuals who don’t understand English, but it also breaks cultural barriers.

Lambert’s next tip is to interact with people. Treating them as if they’re your friends would allow them to warm up to your presence. Once they’re more comfortable around you, it will be easier for you to ask them to pose for you.

In the video, Lambert also suggests that you should still be prepared to take photos even when your subject is done posing. He adds that you can usually photograph raw emotions when people think you’ve finished shooting them.

Lambert shares that to get a good scene, you need to understand your environment. He’s shown in the video driving around on his scooter and stumbling upon a small fire on the side of the road. He expects someone to pass by with water buffaloes, but nothing happens. Nonetheless, Lambert insists that what he did is an excellent example of taking your time and getting the shot.

Many street photographers often look for interesting locations and wait for people to pass by or for an eye-catching event to happen. Since you’ll be shooting scenes that aren’t staged, you may or may not get the shot you want. However, if you’re patient, you’ll get lucky sooner or later and end up with a photo you’ll be proud of.

The last tip the video offers is all about keeping your gear safe. If you’re not confident about taking out your expensive camera, Lambert suggests that you can use a small point-and-shoot camera or your phone, instead. He shares that he likes to patch his lens and camera to make them look less desirable whenever he goes out in public. Apart from that, he also highly recommends buying stickers with fake scratches on them to make people think your camera is old (I personally don’t need those because my cameras already have a lot of real scratches).

These tips may be simple and self-explanatory, but always keep them in mind, because they’ll help you a lot once you’re in the streets. If you like this video, you can watch Lambert’s other street photography video here.