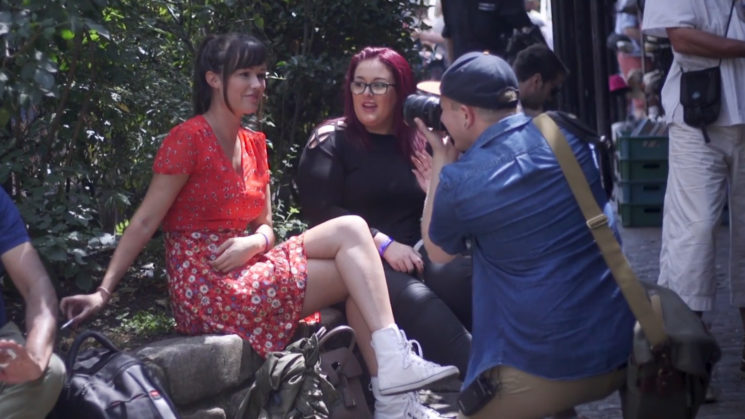 Street photography is a scary enough prospect on its own for many people. But to actually approach random strangers on the street and ask if you can shoot their portrait? That fills many with a fear akin to walking the plan over shark infested seas. You have to really push yourself to get outside of your comfort zone and do something you’re not happy with.

And it can be a very difficult fear to get over. But photographer Matt Higgs from WEX is here to help with some advice. His challenge is to photograph 30 random people in the streets in 2 hours. For those counting, that’s a new person every 4 minutes. A lot of pressure, especially if it can take you 10-15 minutes just to work up enough courage to ask the first,

Despite Matt’s on-screen persona, he’s an introvert like many of us. He’s afraid of talking to random people in the street, too. His suggestion for getting over the fear is a simple but important one. You just have to not care about the fear or what people think of you. I know, that’s a lot easier said than done. But ask yourself, what’s the worst that could happen? That they say no? So what are you afraid of?

The main thing to remember is that when you approach them, be happy, friendly, genuine and polite. Don’t make up some story about why you want to shoot their photo. Just tell the truth. Matt told people he had a challenge to photograph 30 strangers that day, which was the truth.

While people may not understand your reasons for it, they can see that it means something to you. People are, generally speaking, quite nice. So, they’ll often agree to have their photo taken.

As Matt points out, though, people on the street are not typically models. So don’t be afraid to direct your subject. Don’t pose them, but give them an idea of the mood you want. Do you want them straight faced or smiling? Is there a better background or light in a different direction? Direct them to go stand over there and turn this way.

And a couple of tips from personal experience.

So, the next time you’re out doing street photography with your camera, go and approach a stranger!

Note: Just a quick point on releases as a few had mentioned in the comments. Matt’s in the UK. So am I. We have no Right of Publicity here, so no legal need for model releases here. One cannot waive a right they do not have. They’re a good idea here, but that’s about it.

Elsewhere in the world, you’ll have to look into your local/regional/national laws to see what’s what. But even in countries where a release is required, there are many things you can do with the images that don’t require a release.