No matter how many times this subject comes up, it’s always extremely uncomfortable for a great many photographers to approach people in the street. Whether it’s the feeling of being perceived as weird or simply being rejected, a lot of people are afraid to just walk up to people and say “Hey, can I make your portrait?”.

It’s something that photographer Jamie Windsor‘s struggled with, but he’s determined to get over it. So, he reached out to fellow photographer and YouTuber, Pablo Strong, to ask for some help to get over that fear and learn how to approach people in the street.

Pablo has a Streets of London series, on his YouTube channel where he regularly approaches strangers in the street to talk to them, ask them questions, find out more about them and film & photograph them. It’s a fascinating series, which highlights a lot of interesting people. So he’s the logical choice for Jamie to approach.

Pablo’s advice begins with thinking about the types of people who normally approach you on the street. Here in the UK that mostly means people trying to sell you something or collecting money for some charity or other. So, he says it’s important to establish early on that you’re not one of those people. You’re not trying to sell them anything or take money from them.

What types of people may stop you in the street in other parts of the world may differ, but it’s something you want to think about. Who normally stops people in the street and what’s the general reaction to them? How can you prevent or intercept that reaction when you approach them?

He approaches to tell them that he’s photographing strangers or interviewing them. He’s honest and shows non-threatening body language. Chances are, the people you’re approaching will initially feel just as uncomfortable as you do – or at least guarded and defensive. So, be relaxed, confident, honest and non-threatening. 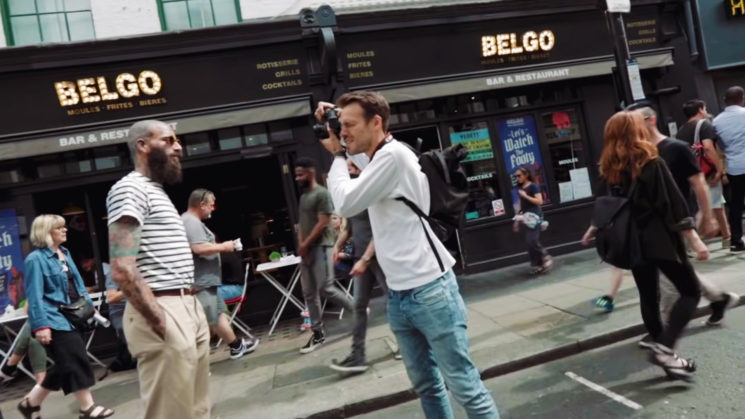 But having somebody explain that to you is very different to watching them actually do it. Which is what Pablo does next as he wanders around London approaching people and asking if he can make their portrait.

It’s very interesting to watch. Just seeing the reactions Pablo receives and how he deals with them helps you to build up your own confidence. You soon realise that the general public’s response isn’t as negative as you might have feared. And when you do get a no… well, Pablo talks about that, too.

For me, approaching people on the street is something I found very difficult to get over. In the end, I went to visit towns that had big events on. Events that literally took over those towns and were filled with people who expected to be photographed. Almost everybody I asked would agree. While that may not help you deal with the nos, it does help to build up your confidence.

The more you do it, the more you learn to engage with strangers, and the easier it becomes. Eventually, you get to the point where you feel slightly less awkward approaching random people in everyday life, in places where there isn’t some big festival or event, to ask if you can photograph them.

It can still be quite scary, and sometimes the nos can still make you feel a bit down, but the yeses you get definitely makes it worth it.

How to approach strangers on the a street for a portrait

« Nvidia trains AI to remove noise and watermarks by looking only at corrupted photos
Report: Canon EOS M5 MK II will be announced before Photokina 2018 »