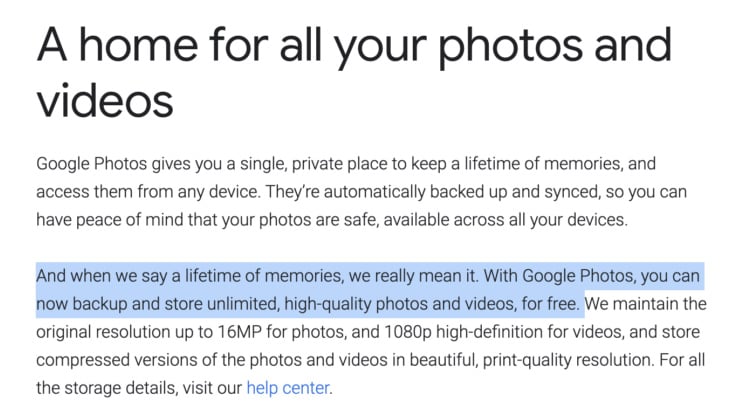 In case you missed it recently, Google Photos has decided to end their free unlimited photo hosting service. Beginning in June of next year users will be limited to 15GB of space before being asked to pay for more storage. How much you’ll have to pay will depend on how much storage you use. Unfortunately for me, I have more photos than fit their top tier $100/year plan, so even if I wanted to pay I’d be capped out of the service.

While I don’t begrudge Google, a trillion-dollar company that makes billions of dollars a year, from wanting to make even MORE money, I am offended by the bait and switch approach that they took with Google Photos. Offering a user the first hit for free is classic dealer marketing. A lot of time and energy goes into organizing your photos on ANY photo-sharing site and when someone spends hundreds or even thousands of hours organizing their photos at a site only to be priced out of the site, those are countless hours that you will never get back.

Fortunately for me I’ve spent a lot less time using Google Photos for the past few years. Google’s consistent bad faith across photo hosting/sharing products has left me very skeptical of anything they do anymore.

Some of you may remember Picasa (Google killed it). I was a user of that. I also was a big user of Google Buzz (they killed that too). Then I put hundreds of hours into my photography on Google+ (once again RIP). We used to do photo walks and hangouts and lots of other fun things around photography with Google+. Here’s my old Google+ URL.

Initially, I was super excited about Google Photos, but that changed over time. I was disappointed that one of their early features, photo facial recognition, didn’t really work for me. It limited the service to 200 faces and unfortunately for me when the service launched it grabbed a bunch of faces of musicians I’d photographed performing at Coachella and chose those as the ones to tag. There was no way to delete those and have it choose people who were actually my family, friends, neighbors, etc.

I was also disappointed that the hours and hours and hours I’d spent keywording all my photos in Adobe Lightroom were stripped out of my uploads to Google Photos. I’m not sure why Google would want to remove one of the best ways for me to search my photos from their service but for whatever reason they strip this data.

Still, Google Photos was free (even though it downsized my photos). It’s hard to complain about free — until they locked my gmail. Last year I received a rather ominous message from Google threatening that unless I paid them for more storage they were going to turn my gmail off.

It turns out that even though Google Photos claimed to be able to convert my photos to high quality JPEGs with free unlimited storage, that TIFF files generated by the software program Analog Efex Pro (ironically a former Google owned product before they jettisoned that as well) were not being converted by Google Photos and were sucking up my gmail storage which was then demanding payment from me. They actually locked my gmail and I missed several important emails that were blocked during this fiasco.

While this is my unhappy story and experience with Google Photos, many, many users were duped into signing up for a free service that they thought would protect, as Google put it, their “lifetime of memories.” Now Google is demanding money from these users.

To me it seems wrong (even evil — remember their old motto “don’t be evil” that they also abandoned?) that Google would bait and switch so many users on this product. You can’t/won’t get the many hours that you spent organizing your photos on Google Photos back. Some will just begrudgingly pay up. What I see is one of the world’s largest companies who used a classic monopolistic tactic to grab market share by pricing out and hurting smaller competitors and now wants to profit from their move.

Once burned shame on you. , six times burned, shame on me. I will never trust Google with another product again.

Thankfully there is an alternative to Google Photos, good old trustworthy Flickr. Here is a thoughtful analysis that was done by Jeremy Zero comparing Google Photos and Flickr.

I’ve been using Flickr since 2004 and for as long as I can remember, my Flickr Pro account has remained unlimited. Flickr/SmugMug CEO Don MacAskill even recently re-iterated Flickr’s commitment to honoring their unlimited service. While Flickr may not be a trillion-dollar company or make billions of dollars every year as Google does, they are a small company that cares about photographers and your photography. They also do a great job storing and sharing your full high-res, uncompressed, high-quality images (and they even retain your photo keywords when you upload them there). I feel much better supporting an ethical small business than a trillion-dollar company using monopolistic bait and switch tactics to try to drive the smaller guy out of business.

When Thomas Hawk isn’t taking pictures, he’s thinking about pictures and trying to publish a library of 1,000,000 processed and finished photos before he dies. You can find out more about Thomas on his website, and follow his work on SmugMug and, naturally, Flickr. This article was also published here and shared with permission.

Just NO! Photographers Stuff Styrofoam into Fish to Bait Eagle For Better Photos

Google Photos “High Quality” not as high quality as originally claimed, Google “warns”
« Here are seven macro photography ideas you can shoot at home and on a budget
Can’t wait for Blackmagic’s new Speed Editor? How about building your own DIY version from scratch? »