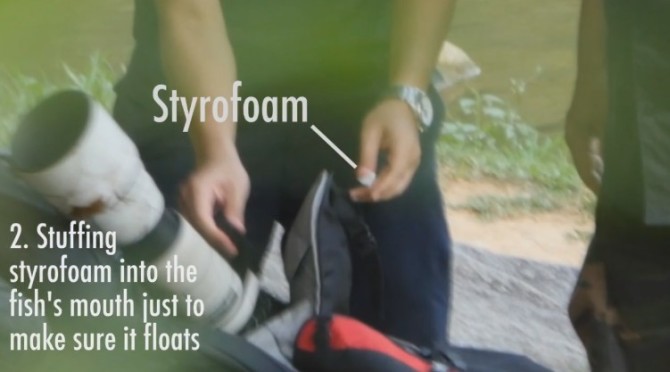 What is the opposite of this motto? Singaporean magazine Mothership reports that they received a video allegedly showing bird photographers stuffing live fish with air and styrofoam so they stay afloat and bait endangered Grey-headed Fish Eagles. Once the eagle came closer for the helpless-yes-very-close fish, they could snap some very cool photos of the eagle.

The purpose of using bait was to be able to capture action shots of the bird swooping in for the kill. Doing so, however, presented a few problems. First, the fish had to be alive and struggling otherwise the fish eagles would ignore it. Second, the fish needed to be afloat at the water’s surface so the photographers would know where to point their lenses in anticipation of an eagle’s approach.

These photographers came up with an utterly horrifying solution: A photographer used a twig he picked off the ground to stuff pieces of white material into the fish’s mouth. These were polystyrene foam chunks (also known as styrofoam), used to ensure that the fish does not sink but instead remains afloat on the water’s surface. #

Styrofoam is obviously bad for the fish, but it is also deadly for the animal that eats it. According to Mothership, the population of breeding grey-headed fish eagles in Singapore is under 20 individual eagles, so using a method that may kill an eagle just makes me cringe.

Photographer shoots an abandoned building he made from Styrofoam and wood