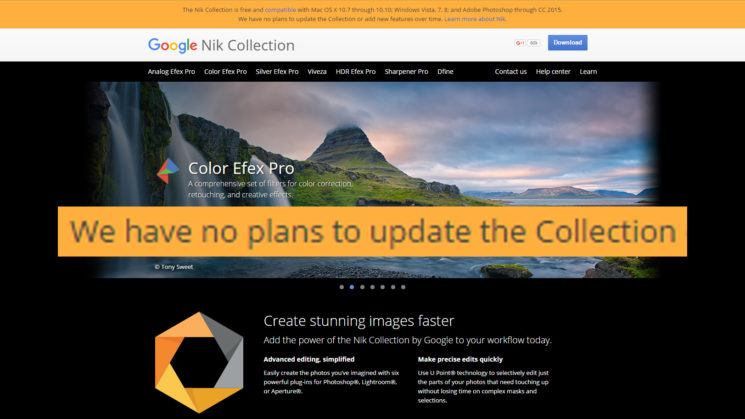 Google haven’t so much announced as “slipped in” that they’ve ceased development of the Nik Collection via a banner. Google acquired Nik Software, the company behind the Collection, in 2012. It was only just over a year ago that Google announced it was making the Nik Collection a completely free download for all users. Now, it seems, that the new price tag doesn’t justify continued development.

We have no plans to update the Collection or add new features over time. Learn more about Nik.

The Nik Collection already had a pretty strong and loyal following before it was made free. Google’s decision to eliminate the price tag made it very popular, and a staple in many Photographers post workflow.

Now that it’s been abandoned, users may be forced to either find alternatives or for those using it as a plugin, stick with older versions of Photoshop. For Windows users, the Collection does does currently work on Windows 10, even if Google don’t list it. Although there’s no guarantees that it will continue to do so in the future.

I tend not to use 3rd party plugins with Photoshop for reasons such as this. Every time a new version of Photoshop comes out, it takes plugin authors a while to catch up. Some plugins never get updated at all. To rely on one or more plugins for part of one’s workflow can make for a whole mess of problems if they suddenly disappear.

But how about you? Are you a Nik Collection user? Is it a vital part of your post workflow?