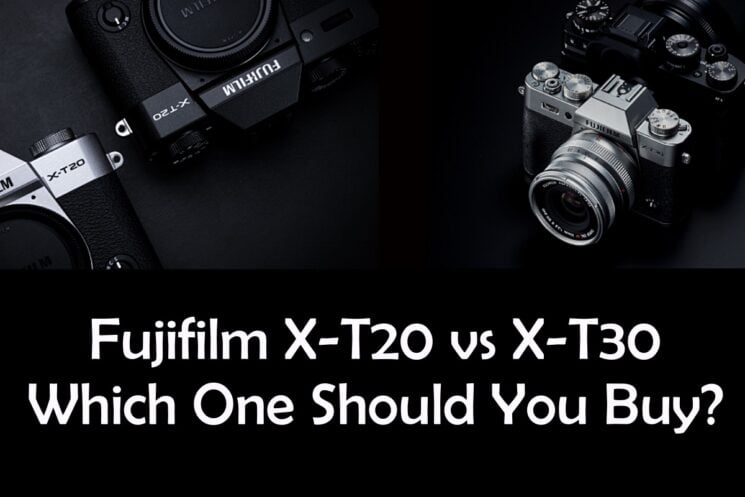 Not too long ago I wrote an article on why I think the Fujifilm X-T20 is still the camera I recommend in 2021. It had great response, but some people thought the X-T30 was clearly the superior camera. In this article we’ll look at the positive and negatives of each camera.

I’ve already written a whole article on this so we will just run through the features that make the X-T20 a better purchase choice.

Although both cameras are very similar, there were some upgrades to the X-T30 that some users may find advantageous.

Is it really all about the auto-focus?

Many people when presented with the argument of which camera is the best state that the difference in auto-focus alone is enough to buy the X-T30 over the X-T20. The reality though is that while there is an improvement, for general use there really isn’t much difference.

Over the 18 months I owned the X-T20 and used it shooting everything from landscapes and architecture to portraits and wildlife, the X-T20 rarely missed focus. I can compare that to my X-T3 which has an even more advanced autofocus system than the X-T3 and can honestly say my hit rate is roughly the same as it was on the X-T20 in most situations, with maybe smaller birds in flight having a slightly higher hit rate and a tiny percentage extra of eyes in focus on portraits (the auto-focus finds faces and eyes quicker on the X-T30). When the X-T20’s AF is already great, and you know what you’re doing, it’s all down to the user.

Of course, depending on your skill level, this may differ, but don’t believe for one second that you won’t be able to manage autofocus with the X-T20

Is the difference between a physical d-pad and no d-pad that important?

For the majority of users, through feedback on every single Facebook group and forum, the change to the layout of buttons on the X-T30 was one of the biggest complaints. And rightly so. The advantage of the X-T20 having the physical d-pad for most users is a deal-breaker. It means you never have to leave your viewfinder once your functions have been set up. This is a difference between getting the shot and missing the shot.

Yes, the X-T30 can do swipe gestures, swiping up, down, left, and right on the screen to set a function change. However, it’s nowhere near as tactile, and if you’re wearing gloves it’s impossible!

If you’re new to the world of Fujifilm or want a second body or you’re upgrading from an older Fujifilm camera the choice is simple. Save yourself a ton of money and buy yourself a used X-T20 for a fraction of the price of an X-T30. Use the savings for more lenses and enjoy going out and taking photographs with one of Fujifilm’s finest ever cameras.

If you want the latest, but not necessarily greatest, want a bit more resolution, a bit better autofocus in some circumstances, and absolutely need focus stacking and Pre-Shot then get the X-T30.

Whatever you decide, you’re going to have an amazing camera which will allow you to take outstanding photographs. Just don’t give in to Gear Acquisition Syndrome (GAS) and buy what you need.

First photos and specs of Fujifilm X-T30 have leaked

Fujifilm announce new X-T20 and X100F bodies and a $6,499 price tag on the medium format GFX
« Samsung’s new 50-megapixel JN1 sensor has the smallest pixels in the world
Computational vs. traditional photography — Complementary, not contradictory »