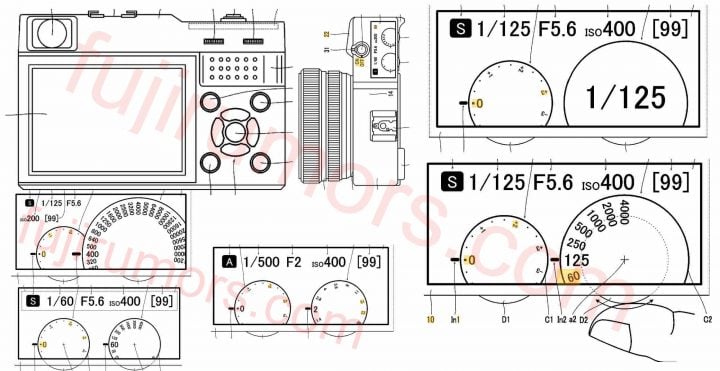 The folks over at Fuji Rumors have come across a Fujifilm patent showing a compact camera with two rear dials that synchronise with a top LCD in order to create a pair of virtual dials that can be assigned to different camera functions. Unfortunately, they didn’t link to the actual patent, so we can’t dig any deeper into Fuji’s thought process behind it, but we can speculate.

As FR points out, the command dials are similar to that found within the recently released Fujifilm GFX 100, except that there are two of them. FR believes that Fuji is working on developing the digital/analogue hybrid user interface for future cameras, which actually makes a lot of sense. Of course, it won’t entirely keep both analogue or digital diehard camps happy, but it looks like a good compromise between the two.

Having a pair of dials perform a number of different functions would theoretically allow Fuji to produce a smaller camera that retains all of the configuration capabilities of much larger systems. If you can use the same two dials to control ISO, aperture, shutter speed, exposure compensation and other functions, that’s certainly going to cut down on the space requirements for knobs and dials on a camera.

Looking at the screenshot of the patent that FR posted, that appears that’s the route Fuji may be taking, too. It shows a very compact camera, with buttons on the back that may allow you to quickly set which dials you’d see on the LCD, and what features the dials operate. Not that going smaller is much of a surprise, given how well received the news of Sigma’s new tiny mirrorless camera has been so far.

I know after walking around Taipei shooting street photography with a DSLR last week, I certainly need a smaller camera. It looks like our options may be getting ready to open up a little.