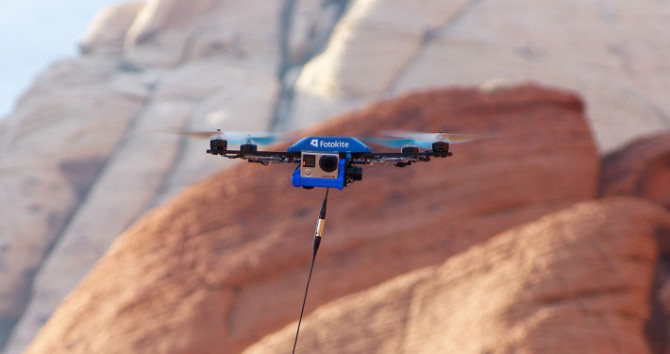 So, the FAA (US), the CAA (UK), Transport Canada (Canada, duh) and countless others are taking a stand against drones restricting usage and allowed flying zones and conditions. Especially for commercial use.

This is where Zurich-based company – Perspective Robotics hopes to gain footage in an ever-crowded niche. Their UAV solution is somewhat different from the DJI’s and 3DR’s out there in the sense that it does not use a radio to control the UAV. Rather it is using a tethered cable to deliver power and control to the airborne half of the unit.

Fotokite claims that at least one Airspace regulator –  DGAC, the French airspace authority – exempted them from the Drone classification.

This video gives a quick intro on the product

Here is a quick show real for the product:

Fotokite is not new to the aerial business and they have been making a pro version for a while now – the Fotokite Pro which they say is “Made for professional use cases and live broadcasting“. Now they plan to bring a consumer version to IndieGogo (which, like kickstarter, is losing its roots as a means to kickstart a company) in August.

This could be very interesting as a tethered approach solves many of the issues that ‘regular’ drones are facing, if you embrace the shorter range. The first one is probably battery time, since power is coming from the ground via the cable, the unit can literally stay in the air for hours. The cable downlink is a clever option for getting a high-quality feed in realtime. But maybe most important of all, just like a kite, the thing is tethered to a person and it is very easy to know who is piloting the unit.

Here are some parts of the press release by the Fotokite:

One of the most common requests we get is to release a consumer-friendly Fotokite – something affordable for folks who want to use one for photography, a hobby or just fun.

Early on, we made a conscious decision to build high-end tools before developing a consumer product. So while we’ve learned a lot by working with broadcasters and TV crews to make the Fotokite Pro, until now we haven’t had the time to properly develop a consumer version of the Fotokite.

Today, we’re excited to announce that in mid-August we will be unveiling just that – the Fotokite Phi, our first affordable, accessible tethered flying camera.

Based on the same GPS- and pilot-less technology used in the Fotokite Pro, the Phi (named after the golden ratio) enables users to quickly and painlessly fly a small camera such as a GoPro, take it anywhere and just have fun (without worrying about joysticks).

Weather this will remain a non-drone is up for when the FAA will take a swab at it.

« Photographer Answers the Question, ‘What Would Chairs Look Like As People?’
New Website Tells You If You Can Bring Your Selfie Stick »