As the protest happening in Ferguson, Missouri following the death of an unarmed teenager who was shot by a police officer, enters it’s 5th day, it appears the police are vigilantly enforcing a complete media blackout. Social media is buzzing with reports of journalists, photographers, and videographers being assaulted, shot at with rubber bullets, and arrested by the St. Louis County Police. A video from local NBC affiliate, KSDK, shows a news crew from Al Jazeera America TV being tear gassed as they attempted to report on the protest. As soon the journalists cleared out, this happened: 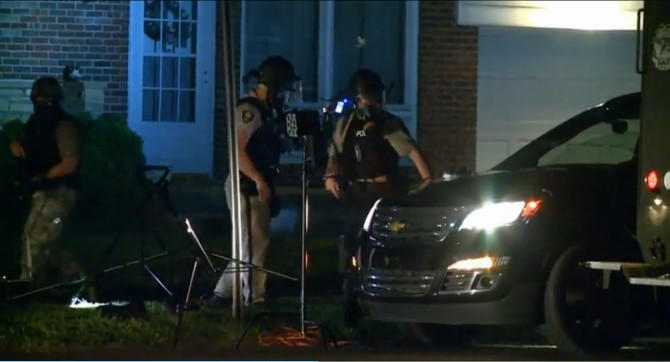 In case it isn’t very obvious, a SWAT team in full riot gear swooped in and began breaking down the journalists camera equipment and lighting setup. Sadly, this isn’t the only case of photographers and journalists having their rights violated while reporting on the event.

As Huffington Post and MSNBC report (see video below), Ryan Reilly, a Huffington Post journalist, and Wesley Lowery, journalist for the Washington Post, were unlawfully arrested for what appears to be on the grounds that they were not leaving a McDonald’s fast enough:

Though, Reilly’s account doesn’t necessarily have him being arrested for being a journalist, as he also mentions, it shouldn’t really matter as no laws were being broken. The arrests of the two reporters have prompted outrage among certain major news outlets. National Association of Black Journalists President, Bob Butler was quoted in a press release as saying:

“”Journalists have a constitutionally protected right to work without the government interference. We call on — and fully expect — the authorities to investigate what appears to be a violation of the First Amendment and to hold the officers involved to account, if necessary.”

The police have been expressing what appears to be a zero tolerance rule for any type of photography or news reporting whether it be from a major news source or an amateur reporter. While watching various livestreams of the events I witnessed the police telling journalists and peaceful protesters to turn off all their cameras. When the group disagrees, a line of officers and armored cars encroach on the group before unleashing tear gas on them or opening fire into the crowd with rubber bullets. Many are declaring the site to have fallen under an illegal state of martial law, as more and more accounts of journalists rights and several other civil rights issues accumulate.

To that heartbreaking end, it would be really kind if someone from the New York City Police Department could forward the memo they got earlier this week to the St. Louis County Police Department; it appears as though they can use a little guidance.

« Photographing Meerkats May Just Be The Cutest Photo Assignment Ever!
Creating A Children Photography Studio On A Budget »