Swedish photographer Sven Hedin was not happy with the flash his the Nikon 1 V1. specifically the proprietary hotshoe mount (and he is not the first one to dislike that).

As any hacker would do he fitted his camera with a shiny new Flashbulb mechanism. Yea, bulb as in old press flashes where you exchange the bulb. 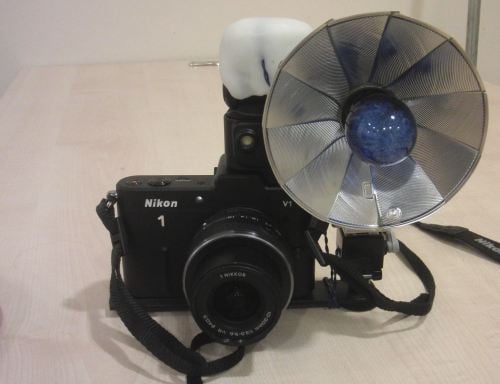 Sven found the perfect path from the proprietary shoe on the Nikon 1 to the flashbulb. it looks something like this:

Here is how Sven describes the project:

I needed a way to sync an external flash to the light from the flash unit provided with the camera, you would think that one could simply buy a slave flash controller and attach it to the external flash, while this would work for most electronic xenon flash units, it turns out it does not work for old disposable bulbs, probably because the voltage is too low and the current too high for the slave controller to give enough of a pulse. I could have just build additional electronics for a slave controller to make it work, but i happened to have a tube of VO2223A, an opto coupler triac that can handle 600V and several amps pulsed. Since it’s an opto coupler it will be triggered by light, and since it’s often used for dimming it has to have rather fast response. I simply cut it in half between the primary and secondary side, soldered wires from it to an external flash shoe adapter, attached my old flash unit to the shoe and the sensor to my camera.

And here is a video describing how to build the rig.

For the full details and photos showing that the old school flashbulb give 4 stops over Nikon’s SBN5 visit Sven’s Site.

It seems like Sven would have to work pretty fast exchanging bulbs to meet the Nikon 1’s 15 frames per second rate.

Thanks for the tip, Jason.