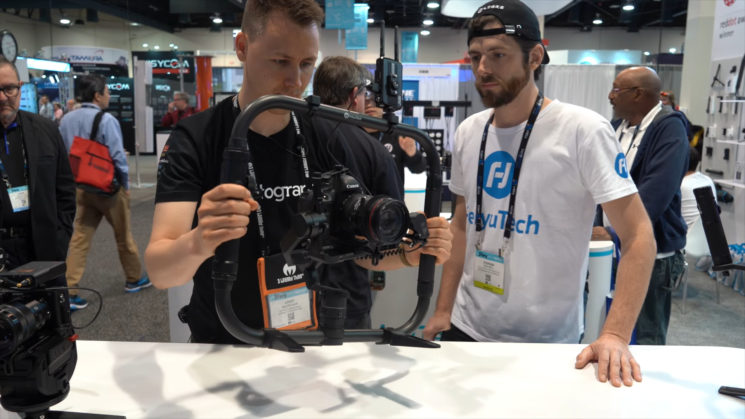 One of the products I was keen to see at NAB 2019 was the new Ricca action camera from Feiyutech. A popular name when it comes to gimbals, action cameras are a new market for Feiyutech, so I was interested to see just what it was like. We had a chat with Feiyutech about the new Ricca action camera, and also discovered a couple of other new products, too. The AK4500 3-axis motorised gimbal for DSLRs and mirrorless cameras, a dual handle frame, and the Feiyu Qing, a remote control pan & tilt head.

There isn’t a lot of information out there on the Ricca yet, so we wanted to find out a bit more about it. It’s been designed specifically to fit the Feiyu G6 gimbal to allow better communication between the devices to offer increased versatility. It will, though, also operate standalone, with other gimbals, or using the typical action camera mounts that many of us already use. It shoots 4K video at 30 frames per second, has electronic image stabilisation, is waterproof up to a metre and offers many of the features of its competitors.

The Feiyu AK4500 is also new. An update to the AK4000, the load capacity has been increased while the gimbal itself has been made a little lighter. It also sees a new handle to allow for easier control and for shooting underslung.

What really caught my interest on the Feiyutech stand, though was the Feiyu Qing. This is essentially a motorised pan & tilt head for using on top of a stable platform like a tripod or slider, that can be controlled remotely. Information on this unit is being kept quite guarded at the moment, but after having had a bit of a play with it, it does seem very cool. It’s still in the prototype stage right now, although an official announcement along with more specs and details is expected soon.

All of the products shown in the video are expected to launch in May 2019.