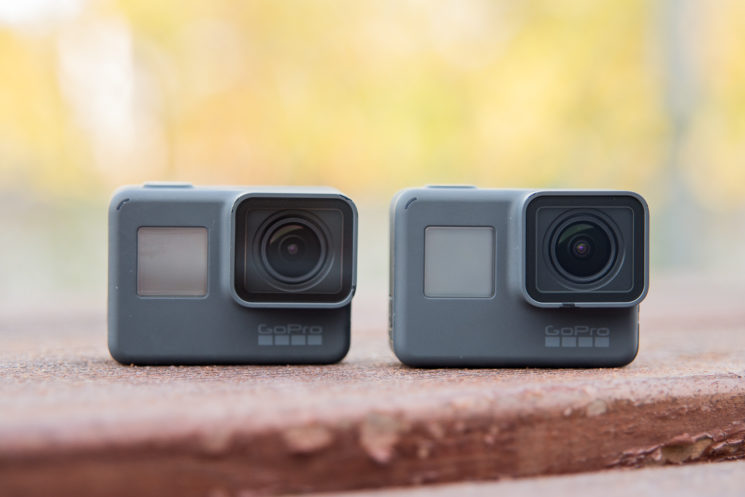 With the release of the new HERO6 Black, GoPro continues to advance and refine what we can expect out of an action camera. Released just one year after the HERO5 Black, the HERO6 Black has all the right upgrades in all the right places.

First, let’s look at what hasn’t changed. The HERO6 retains the same small design with rounded corners as last year’s model, along with the 2 button layout and the 2″ touch screen on back. It also has the same 12MP resolution as the HERO5. It is still waterproof down to 10 meters without the need for a separate housing. It even continues to use the same 1200mAh battery as the HERO5. In fact, the only way to tell the difference between the two cameras is by the vertical “HERO6” on the lens side of the camera.

What has changed is the camera’s ability to capture better looking footage at higher frame rates, seamless transitions from light to dark areas, better image stabilization and a more accurate color representation. All of this is made possible by a new processor that was made in-house by GoPro. The only performance improvement that the new camera doesn’t seem to bring is better battery life. The HERO6 has the same amount of record time as the HERO5– which was better than the HERO4, but still, a few more minutes of action would have been nice.

To test out these new filming capabilities I enlisted the help of my friend Tom Schneider, a off-road unicyclist. We met at a short mountain bike trail at Alum Creek. I wanted to focus the comparisons on the changes in the HERO6’s ability to capture high quality footage at 4K, its ability to transition from light to dark, improvements to image stabilization, and, higher fps capabilities. I did my best to capture side-by-side, simultaneous comparison shots, and I was able to, except for the hand-held stabilization test. So, after Tom got all of his protective gear on and his unicycle ready to ride, we were on the trail and filming

“The first thing that I noticed about the footage was how much better the color looks from the HERO6.”

The first feature I was looking forward to testing was the HERO6’s ability to capture 4K footage at 60fps. Not only should this allow for high-quality, slightly slow-motion shots at 4K, but it should also keep the motion blur to a minimum since you are filling in the footage with more frames. Here is Tom going over a small wooden bridge and some logs.

The first thing that I noticed about the footage from the HERO6 was how much better the color looks. The color temperature and tint from the HERO6 are truer to life than the HERO5  (where everything looks a little cooler and has a magenta cast). This difference something that I found to be consistent throughout all of the footage.

The actual 4K footage itself is a pretty significant improvement as well. When I zoomed into the footage and played it back, there is noticeably less motion blur from the HERO6.

Transitioning from Light to Dark

Another improvement the HERO6 boasts is the ability to adjust its exposure (as fast as the human eye) when transitioning from a dark environment to a light one. To test this feature, I strapped the GoPro to Tom’s helmet and had him ride from the shade, out into the sun and back into shade.

The HERO6 does a great job of making the adjustments – so much so that I was actually questioning if I had found a place dark enough to test out this feature. You can see it handling the change in light right in the middle when he turns his head slightly into the sun, right before heading back into the trees.

If you’ve done any filming with an action camera, you know just how important image stabilization is. Whether you are filming a kids’ soccer game, or professional athletes attacking a downhill snowboard course, you know that you’re not a human gimbal and camera shake is a way of life. Luckily, action cameras have been making steady improvements in this area with every new release. The HERO6 is no exception. I took turns running behind Tom over the last areas of the trail with each GoPro in my hand. The HERO6 again outperforms the HERO5.

You can see the difference right away. The HERO6 does a much better job of minimizing the shake and blurriness of the motion. While it’s not up to the standard of the Karma Grip , it is a definite improvement from the previous model.

The HERO6’s improved slow motion is probably the feature that I was looking forward to testing the most- I love a great slow motion sequence! The HERO6’s ability to shoot 240fps at 1080p should make many action shooters, including myself, very excited. The higher the frame rate you can achieve, the more control and flexibility you have to really get the most out of every action shot. Here you can see Tom navigating a section of trail with a bunch of logs across it. I filmed the HERO6 at 240fps, and the HERO5 at its max of 120fps both at 1080p.

HERO5 vs. HERO6: The Winner

“GoPro is sending a message that they are here to stay and that they still want to be the best action camera on the market.”

Obviously, the updated HERO6 is a better action camera than the previous version. GoPro is sending a message that they are here to stay and that they still want to be the best action camera manufacturer on the market. Should you upgrade if you have the HERO5? As always, the answer to that is . . . maybe. If you’re looking to upgrade an older model GoPro, or are looking to buy your first action camera and want the best, the HERO6 is a no-brainer. If you are always looking to capture the best quality footage, and you want the highest frame rates you can get, then the HERO6 is the camera for you. If you already have and love the HERO5, then there is no harm in holding onto it. After all, it is now the second-best action camera on the market.

Matthew Lee Dyer is a photographer, vlogger and an author at MPEX Experience. You can find more of his work on his Instagram and YouTube channel. This article was also published here and shared with permission.

An extreme weather review of the Leica M-P