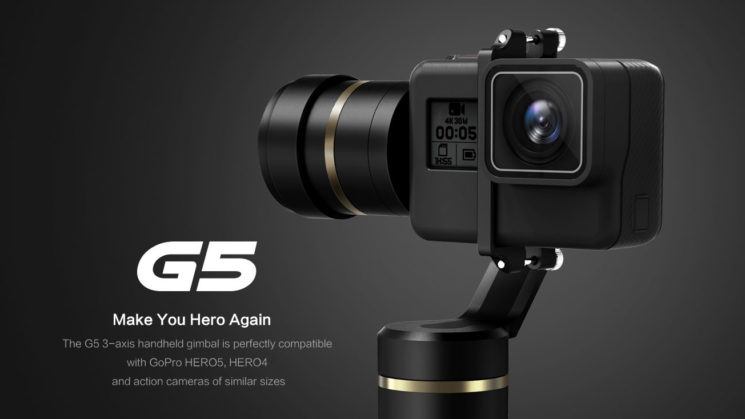 Handheld motorised gimbals are fantastic pieces of kit. Whether it’s for an action camera, phone, DSLR or even a RED camera, they do their job extremely well. One thing that’s been an issue for a lot of people so far, though, is that they’re not really “all weather”. Even though your phone or camera might be in some kind of waterproof housing, trying to operate a gimbal in the rain isn’t exactly the best idea.

This has been a bit of an issue for me, personally, too. Living in the almost perpetually wet UK, I am at the mercy of the weather when I want to use mine outdoors. Feiyu are starting to solve this problem with the release of the new Feiyu G5 3-axis handheld gimbal for action cameras. Designed specifically for the GoPro Hero5, which also features built in weather proofing, it will also work with other action cameras, too.

Lok Cheung, formerly of DRTV, got the chance to check one out in person at a recent Feiyu press event. He also got to play with a few of Feiyu’s other toys, and put a video going through them in typical Lok fashion. The relevant bit about the G5 starts at 1:05.

While this is “only” an action camera gimbal, it holds great possibility for the future. With the built in weather & water proofing capabilities of the GoPro Hero5, it was the obvious first choice. Sure, you’re not going to be able to go diving with it, but out in the rain? standing around a waterfall that’s spraying up water? while snowboarding or skiing? absolutely.

So, what’s the difference between weather proof and water proof? In short, the G5 not completely sealed from the elements. From the outside, it looks very similar to the previous generation Feiyu G4. It also has the potential to let water in just like the G4. The big difference is how the components are packaged up and protected inside.

As Lok explains it, instead of sealing the entire body of the gimbal, they simply sealed the sensitive electronic components inside. This means that water can still get inside (hence, no diving), but that’s where it stops. It’s not going to fry the electronics.

It certainly seems enough to stave off the rain, waterfall spray or melting snow. I would bet it’s likely to survive a pretty big splash by the side of the pool or on the beach, too.

Great for action cameras users, but not much for other cameras, yet. Despite not officially being “weather proof”, many smartphones these days are offering some pretty good sealing. Samsung’s Galaxy S7 and the iPhone 7 both have extremely good water resistance capabilities (your mileage may vary). So, hopefully smartphone gimbals will be next to get a little bit of weather proofing treatment.

As Feiyu start to replace their products with the next generation, I’m sure the implementation will improve, and offer even more resistance. Once it starts coming to their larger mirrorless and DSLR gimbals, it could become a (sorry, I’m going to say it) “game changer” to video shooters.

As I said earlier, the weather is my biggest problem when using my gimbal outdoors. Some climates are just more prone to rain than others. Being out in the rain with my cameras isn’t a problem. My iPhone stands up well to rain, 5 of my DSLRs and most of my lenses are also fully weather sealed. I’ve been out shooting stills in some pretty torrential weather.

Being able to film stabilised video footage in such conditions will be a huge benefit for me. So, it’ll be nice when the high tech support systems we use with bigger cameras can catch up to the cameras themselves.

The Feiyu G5 action camera gimbal is available now for $299. It’s compatible with a wide range of action cameras, and you can find out more about it on the Feiyu Tech website.

What do you think? Have you stuck with the plain selfie stick because gimbals couldn’t stand up to what you need? Will you be getting the Feiyu G5 for your new GoPro Hero5? Do you think other manufacturers will follow suit? What gimbals do you use right now?Let us know in the comments.