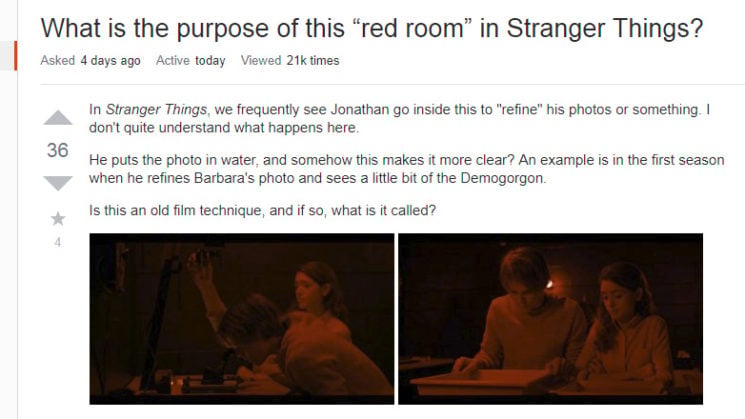 For most of us who own cameras, we’ve at least heard of a darkroom, even if you’ve never been used one or been inside one. It’s been a part of photography for as long as photography has existed, and there are many still around today, despite the world going digital. A lot of people still shoot film, and there are plenty of darkrooms around the world you can hire, even if you don’t have your own.

One appears in Stranger Things quite frequently, and it’s somewhere we often see Jonathan go to develop his photos and make prints. One viewer, though, seems pretty confused as to what the hell this “red room” is. This viewer took to StackExchange to ask the question. Poor Ansel would be turning in his grave.

In Stranger Things, we frequently see Jonathan go inside this to “refine” his photos or something. I don’t quite understand what happens here.

He puts the photo in water, and somehow this makes it more clear? An example is in the first season when he refines Barbara’s photo and sees a little bit of the Demogorgon.

Is this an old film technique, and if so, what is it called?

Many of us will know that this room is called a darkroom and it’s where photographers develop their film and make prints. For many of the younger generation who’ve never experienced any kind of film photography, the unfamiliarity is quite understandable. Although, it’s still making the Internet, particularly on Twitter, feel quite old.

Dear God, please don't let them find a VHS tape or landline phone, the kids will think it's some sort of witchcraft! ?

Of course, this isn’t the first time teens have been challenged by tech recently.

Try not to feel too old, though. Film photography is on the rise, with many of the younger generation now starting to discover film’s unique process and aesthetic. Although there are few places that people can go to learn it for themselves, outside of YouTube.

But all is not lost. Harman, the company behind Ilford films has a database of public and private darkrooms all over the world, along with tuition. So, if you’ve been thinking about heading into the “red room” and learning what it’s all about, that’s a good starting point.

« This is what working in Photoshop was like in 1988
Amazon uses guy’s photo on their jobs website, but they didn’t hire him »