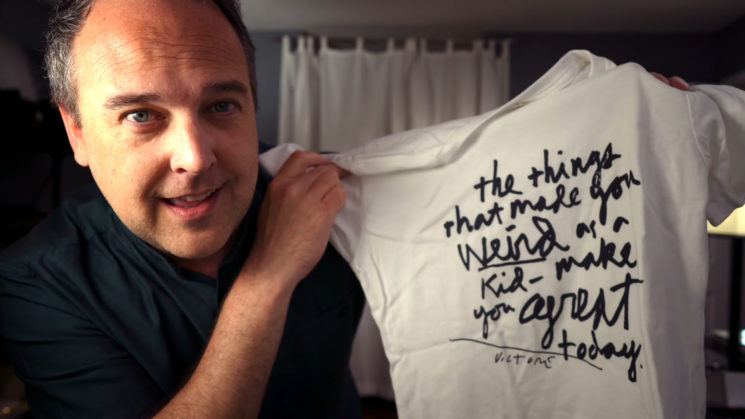 Fear and creativity go hand in hand. At least, I believe they should, if you want to really push yourself. But getting over that fear can be very tough. But it’s a weird kind of fear. It’s not like a fear of flying, or rattlesnakes, or something tangible that does hold at least some chance of causing you physical harm. Fear in creativity is often created solely in our minds. And we suppress it.

Because we can avoid it by simply not pushing ourselves and not putting ourselves out there. Ted Forbes from the Art of Photography discusses this fear in a recent video, and makes some extremely good points about how what might be the cause of it. It turns out that, as well meaning as they may have been, it could be our parents fault.

Ted believes the whole fear thing starts with how we’re raised. There’s a discipline and set of rules that our parents and family instil in us when we’re young. It’s to help us be accepted into society and succeed. We’re taught to be polite, to hold the door for people, to say please and thank you, to not be an asshole and be considerate of others.

All things which are good for people to learn at a young age, things that will be valuable to us throughout our lives. But when it comes to creative work, it can hold us back and cause that fear. It’s not their fault. They mean the best.

We tend to look back and we go forth with creative work with a set of manners. Whereas, creative work is the avenue where you can ignore all that and express yourself in whatever way you want. For the most part, that isn’t going to hurt anyone. It might offend somebody, but art is a big thing and it is an expression of one’s self.

And he’s right. In the real world, we do things so that we don’t upset or hurt people. And we don’t want the backlash if they don’t like it. It’s a fear of not only upsetting others, but hurting ourselves. And we still should be teaching those things to our children. Do unto others, etc. but they really have no place in our creativity.

You can see it in young children who’ve not yet learned the social norms of politeness. They create whatever they want to create and they’re proud of it, they want the whole world to see it, and they don’t care what anybody thinks. Then as they grow, they start to become more self-conscious of their creativity “what will people think? they might hate it!”, especially if they’re trying something new or different.

To impress the point, Ted tells a story of his niece. She was upset because a kid at school called her “weird”. This reminded Ted of a T-shirt he bought created by designer James Victore (who’s also pretty awesome, I’ve been following him on YouTube for a couple of years). Printed on the shirt is a quote.

The things that made you weird as a kid – make you great today.

And it’s so right. It’s important to hold onto that “weirdness”. To not worry about what people are going to think or say, or how they’ll react to something we create. Or at least pretend we’re not worried.

It’s something I’ve only really started coming to terms with in my own work in the last few years. Mostly due to the rise of Facebook and social media. Biting the bullet and putting work out that was very different to what I’d always done before and what people expect me to do. I still had that fear, but I figured if people hated it, I could always just delete it and go back to what I was doing. But, it turns out most of them didn’t hate it.

I said at the start that it can be a difficult thing to get over, and it often is. Sometimes, though, you’re sitting there at the computer. You’re debating internally about whether or not to show off your latest creation to the world. But then, you just have to think “f**k it”, click submit, walk away for a couple of hours and hope for the best. What’s the worst that can happen?

Stop letting fear hold back your creativity, ambitions and abilities