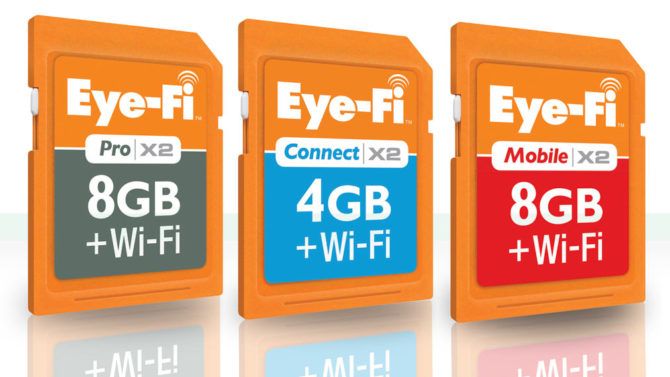 Several weeks ago, you may remember a post about Eye-Fi’s decision to “End of life” a bunch of their products. It’s not uncommon for companies to drop support for their older products, no matter how popular they may be. The problem with their decision, though, was that it would’ve basically bricked all of those products from September 16th, making them completely useless.

Ok, so you could still use them as regular SD cards. Although, who would use an overpriced Class 4 8GB card these days when fast 128GB UHS-I cards are so cheap? In a surprise email I received this morning, Eye-Fi have announced new software for those older cards. This software removes the need for online connectivity to activate or configure the cards.

They’re finally giving us the cards that the Eye-Fi should have been since day one.

Update: September 1st, 2016 – Windows version of the software is now available for download, see the bottom of the post for details.

Here’s what the email says.

This notice is to inform you that Eyefi has started work on a new desktop software utility – the X2 Utility (X2U) for the PC and Mac – that will permit cards impacted by the EOL continue operating beyond the deadline of September 15, 2016.

As a reminder, after September 15, 2016 Eye-Fi Center desktop software will no longer have the ability to configure Eye-Fi X2 and other cards impacted by the EOL.  Customers wishing to use the X2U will have to uninstall Eye-Fi Center from their computer prior to installing the new utility.  Once the X2U is installed and activated, cards impacted by the EOL will have ability to continue transferring images to a desktop computer.

The X2U will be provided to users free of charge as-is and without warranty or helpdesk support.  We will publish knowledge base documentation on how to set-up and use the X2U.

This is basically the best response anybody could’ve hoped for from Eye-Fi. It’s pretty much the only one they could have made to fix the situation.

Many users swore off ever buying any more Eye-Fi products as a result of their previous announcement. People felt like they were being forced into parting with more cash for no good reason. They also didn’t want to continue buying into a company that could brick their products at a moment’s notice.

One line in the email, shortly before the new software announcement I found very interesting. I thought maybe Eye-Fi had finally learned what their users had always wanted. What they still want with their current model products.

Note:  Eyefi Mobi and Mobi Pro customers are not impacted by this EOL process.

Turns out, probably not, no. In fact, the “Highlights” list for the new software specifically states…

So, it won’t work with their current Mobi and Mobi Pro cards.

Perhaps ironically, I think this will make their older “obsolete” cards more popular than their current ones.

Most of the people I know who use Eye-Fi cards are event photographers. They will often shoot RAW+JPG to cameras with dual cards slots. Raw files go to one card, JPG files go to the Eye-Fi in the second slot. From there, they are beamed to viewing stations. They’re not gunning it at 10fps, so for them, the older, slower, Class 6 cards are perfect.

Having to be online to activate & configure them has always been the biggest complaint I’ve heard from those guys. Many take their own routers to events to increase range. They aren’t online during the events, but they needed to be online while configuring the card to log into them.

With the new software, those cards will work exactly how many photographers wanted them to. For those that don’t automatically upload their images to “the cloud”, it actually increases functionality, even over their newer cards.

I do wonder, though, if this might be too little, too late.

If not for the severe backlash received resulting from their last announcement, today’s would probably never have happened. They should have figured this out before calling EOL on their products. That they didn’t suggests several things, the most obvious being that they just don’t care.

So, Eye-Fi were still willing to brick the products of tens of thousands of their customers. Despite the new software, that fact leaves a very sour taste, and many have already sought out alternatives.

I’m one of them. I’ve already switched over to using the “poor man’s Camranger“, using a hacked TP-Link router. It’s works flawlessly for me. It may be a little more cumbersome than simply popping in an SD card, but the functionality and super fast speeds are worth it.

So, even though this makes Eye-Fi’s X2 range of cards work they way they should’ve done from the start, I can’t see myself going back to it full time. It will be very welcome news to some, who’d invested into several cards and rely on them at jobs.

The X2U Utility is now available for Mac and you can download it here. An ETA for the Windows version has not been announced. In fact, their wording suggests that there might not even be a Windows version.

If and when the Windows version is available, it can be accessed at the same location.

This is entirely speculation, but I would imagine they want to see how the public receive this news before putting more time into the software than they have to.

Well, as probably one of the loudest disgruntled customers after the previous announcement, I say well done Eye-Fi. Everything else aside, you listened to your customers and are doing something to try and make it right.

If only more responded that way.

So, question time. Have you already replaced your older Eye-Fi cards with the new ones? Do you feel you’ve now wasted money on the new cards now that you ultimately didn’t need to? Did you switch to a different wireless solution entirely? Will you go back to Eye-Fi if you left? What do you think of Eye-Fi’s response? Is it just an attempt to save face, or did they simply not realise how popular their previous products were? Let us know your thoughts in the comments.

Update: 1st September, 2016 – The Windows version has been released today

So, Eye-Fi have now released the Windows version of the software. Remember, you’ll need to uninstall your existing Eye-Fi Center desktop software before you install the new Eye-Fi X2 Utility. You can find an index of articles on the Eye-Fi website regarding the new utility here, but the important ones are below.

EyeFi to drop support for some cards. They will ‘magically’ stop working on September 16, 2016