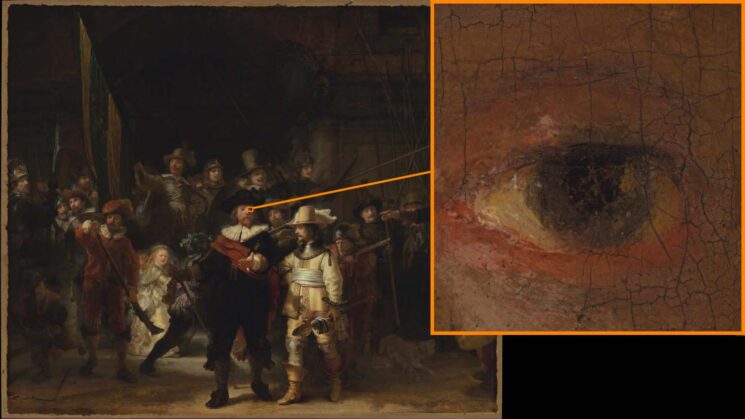 Famous Dutch painter Rembrandt is known, among other things, for his incredible attention to detail in his work. Now you can explore every little detail of his painting “The Night Watch” thanks to a ginormous 717-gigapixel image of the painting. It was released by the Rijksmuseum in the Netherlands, and it’s the largest gigapixel image so far.

The record-breaking image is a part of the “Operation Night Watch,” the largest and most wide-ranging research and conservation project in the history of Rembrandt’s masterpiece. The project began in 2019, and the conservation team used a 100 MP Hasselblad H6D 400 MS to capture individual images. They took 8,439 individual photos, each measuring 5.5cm x 4.1cm. Relying on AI, they stitched these smaller photos together to form the final 717-gigapixel image. That’s one gigantic photo, and it made a total file size of 5.6 terabytes.

Other than exploring the iconic painting’s front, the team also moved the painting from its usual position in the museum to explore its back. Furthermore, they managed to recreate the missing pieces of the original painting. “Imagine: you want to move a large painting, but it doesn’t fit in the new place. What do you do?” the museum writes. “In the case of The Night Watch in 1715, they cut off pieces.” Yikes!

The museum notes that the missing pieces have never been found. So, the team used neural networks to reconstruct the original appearance of the painting. “Hour upon hour, the computers have been whirring away, recreating these missing pieces on the basis of a 17th-century copy,” the museum writes. So, you can now explore the recreated original version, or compare it to the “cropped” one that’s exhibited in the museum.

Browsing through the 717-gigapixel image of Rembrandt’s famous painting is truly awe-inspiring. But more than that, such a detailed photo will help conservationists preserve it in the best possible and accurate way. If you’d like to explore and admire it, make sure to visit Rijksmuseum’s website.