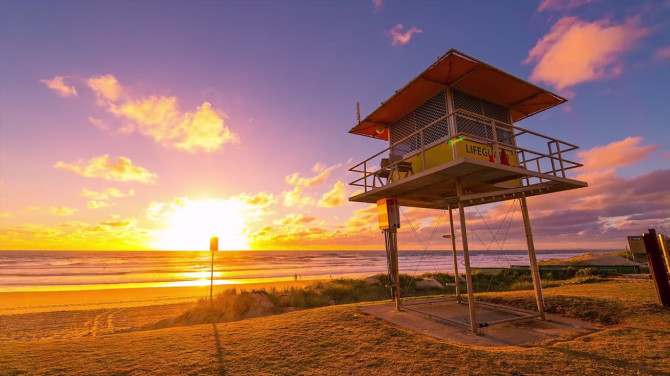 We featured a timelapse that showed us the city lights of a bustling Melbourne and now it’s time to see what else Australia has to offer. This time we’re visiting the famous Gold Coast by way of this sweet timelapse created by Joe Capra, a Los Angeles based photographer and filmmaker. Capra, who works under the moniker  Scientifantastic, is no timelapse newbie. He’s worked for some major name clients including National Geographic and Discovery Channel, just to name a couple. You probably even remember Capra’s impressive Rio De Janero timelapse that we featured here last year.

So, without further ado, let’s take a look at all his latest work, Australia’s Gold Coast – Timelapse, and see what it has to offer:

Shot as a project for Gold Coast Tourism, Capra spent two weeks adventuring around southeastern Queensland to collect the stills he needed to capture the footage. With him he carried 3 Canon 5D Mark III bodies and an assortment of Canon lenses. For the panning shots, Capra used a Dynamic Perception dolly with eMotimo motion controler.

And what about those aerial shots? Capra was able to get the expense of a helicopter rental worked into the budget. He recently told Planed5D in an interview:

I pitched the idea to Gold Coast Tourism and they loved it, and managed to get a little extra budget for the project so we could give it a try…

The first major decision I had to make was how the heck am I going to shoot this, and with what. I was initially dead set on shooting this as actual multiple still frame timelapse using a DSLR such as the Canon 1DX. I wanted to shoot with a DSLR in hopes of using slower shutter speeds to possibly get some light trails on cars.

However, shooting at these slow shutter speeds from a slow moving helicopter increased the chance of failure and blurry frames. Again, this was my first attempt and I didn’t want to risk it, so I finally changed my mind in favor of shooting it as video and just speeding it up. Since I was not going to get and light trails either way it wouldn’t matter if I shot it as video. With video I would have much more flexibility in terms of time remapping and playback.

After doing a bit of research on aerial gear and filming from helicopters, it looked like the best tools for the job that fit our very small budget for these shots was a Tyler Middle Mount with a Sony F55 camera and Arri Alura 18-200mm lens. Because of the Tyler Middle Mount’s size it required the use of an AS350 B2 Eurocopter helicopter. I shot everything 4K raw at 24fps, but I also shot a few shots at 30 and 60 fps.”

As for post production, Capra is a dedicated Adobe user. He starts with Lightroom, where everything gets organized, color corrected, etc. Holy Grail shots (day to night transitions) were run through the LRTimelapse. He then moves over to Adobe After Effects for stablization and flickre removal. The iamges also see some noise reduction and dust removal once inside AE. Finally, the images are imported into Adobe Premier rendering.