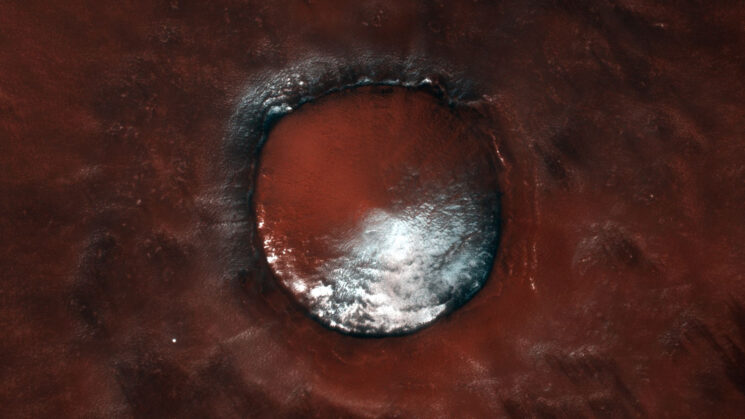 We’ve seen plenty of awesome photos of the Martian surface thanks to Curiosity and Perseverance rovers. But ESA has recently shared an aerial shot that looks more like an abstract photo. It shows a white icy crate standing out against the red surface of Mars, and it’s truly gorgeous.

The photo was taken by ESA/Roscosmos ExoMars Trace Gas Orbiter on 5 July 2021. The crater you see in the photo is 4km wide, located in Mars’ north polar region of Vastitas Borealis. “The crater is partially filled with water ice, which is also particularly predominant on its north-facing slopes that receive fewer hours of sunlight on average throughout the year,” ESA writes. “he dark material clearly visible on the crater rim – giving it a somewhat scorched appearance – likely consists of volcanic materials such as basalt.”

ESA’s Trace Gas Orbiter arrived at Mars in 2016 and began its full science mission in 2018. Its mission is extremely valuable as it’s providing an amazing inventory of the planet’s atmospheric gases and mapping the Martian surface for water-rich locations. It should reach Mars’ surface in 2023 when it will also provide data relay services for the second ExoMars mission. And of course, it returns spectacular images for us, photo enthusiasts, to admire.

I love the comparison ESA gives, describing this photo as resembling “a sprinkle of powdered sugar on a rich red velvet cake.” I find it indeed very interesting precisely because all of us can see something different in it. What do you see?

Perseverance rover shares its most “liked” Mars photos for 2021