In the world of detective TV there always comes a moment where the prime detective discovers that they have this one single snapshot of the murder victim from seconds before they were killed.

This is where they scan the photo, and “enhance” it to see the killer’s reflection in the victim’s pupil. Or it might be a reflection on a shiny toaster, or a silver shirt button. It does not matter, as long as it can be “enhanced”.

A team of researchers in the Department of Psychology at the University of York took a shot at the myth and discovered that “enhancing” pupil photos to identify people is actually a reality…. 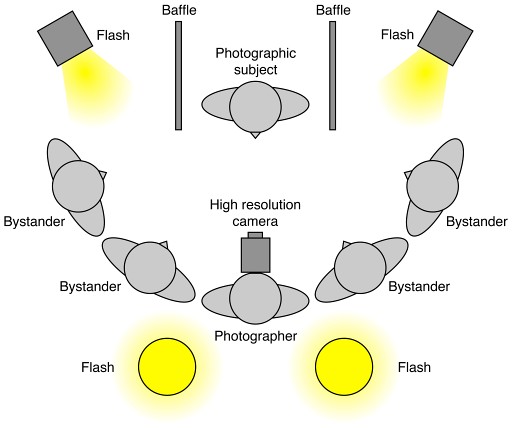 Counting of the fact that humans are extremely good at recognizing faces even with minimal information the team setup a test where they extracted faces reflected in pupils from photos.

Participants were then asked to identify the people and even though quality was quite poor, they managed to do so with great success. The mail idea is that the pupil serves as a great mirror to give a pretty decent reflection.

The pupil people were zoomed in, cut out from the frame and finally enhanced. And though the image was only about 322 pixels in total, it was still pretty recognizable after some regular enhancements. About five out of six tests were successful.

In fact, the test went pretty well even with some of the pupil-persons were not familiar to the testers, giving a 3 out of four positive result.

Sadly, this technique is probably not applicable (yet) to our everyday photography. Both because most cameras don’t carry enough resolution (the H2D is a 39MP beast) and because lighting conditions are not as optimal as those used in the test.

To finish, I leave you with this supercut of Enhancing photos in movies (gong all the way back to MacGyver when image enhancing software was almost a far dream)

[Identifiable Images of Bystanders Extracted from Corneal Reflections | Plos One]

How to swiftly enhance sunset colors in Lightroom