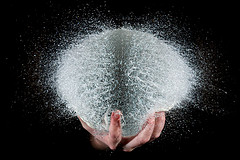 London based photographer Edward Horsford photographs balloons in a very unique way. He freezes them as the leave his hands to explode.

The pictures are taken with a “high tech” DIYed sound trigger, Strobes, and one rusty stick.

The following post which bounces from interview to tech details outlines the way to take such photographs.

DIYP: Can you tell DIYP readers a little bit more about yourself?

Edward: Myself – ha! – I live in London, and work in service design / informatics for an energy company. I previously studied industrial design, so the electronics / build involved in making a trigger isn’t an issue. Photography is usually just a hobby, though I have done the odd bit of commission work. I’m very interested in capturing shots that are unique and not the run of the mill. My high speed trigger was just one way of achieving this. 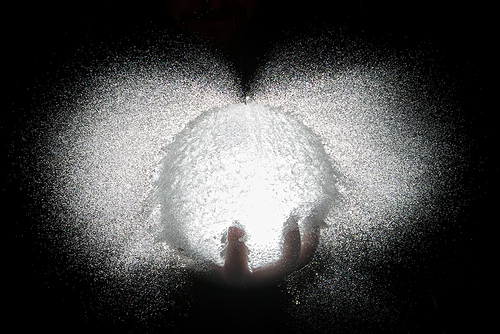 DIYP: Exploding balloons are kind of an odd object to photograph, can you tell how you started?

Edward: I’ve always been interested in high speed photography, in capturing a moment rarely seen and almost never captured. After being on my to-do list for far too long, I decided to have a go myself. I wanted to build the right bit of kit, so spent several months working out how I wanted it to work.

I’m trying to create works that are interesting and highly unique. Whilst I’m doing it just for the enjoyment, I really appreciate the comments from people on flickr. I’m not shooting with any commercial aims, though would be interested in licensing some of them.

I think my work with the trigger has vastly improved since my first shoot. There’s hundreds of water-balloon bursting photos on flickr, but far fewer that are actually interesting. I didn’t want to take a shot that a hundred people before me have taken, I wanted to shoot it in a new way. Thus with each shoot I challenge myself both artistically and technically. I do get some dud shots (and ideas that don’t work), but have been equally thrilled with the shots that have come out.

With each shoot I’ve had wonderful comments on flickr which have helped encourage me to keep going. So thanks to everyone who’s commended or suggested new ideas. It’s nice to know that running around in the dark and getting wet is worth it. 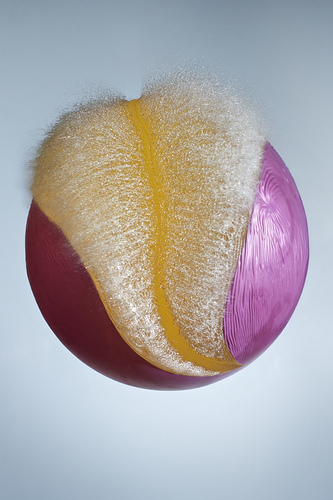 DIYP: What equipment are you using?

Edward: You quickly discover that SLR shutters are far to variable and slow to be triggered for high speed shots. Thus you have to trigger the lighting, and have flashes that can be bright enough yet also have the smallest duration. The SB600 at 1/64 is *just* ok for this, but the SB800 at 1/128 is much better. People doing even more high speed stuff like bullets will have custom-made flashes.

I’m using a custom made trigger that I designed myself. I spent much time researching the available triggers, and found none that offered anything more than something I could build myself. It was a good challenge to build, and means that I can be far more adaptable with features and functionality down the line. I found the CameraAXE a great inspiration, both for features and example code. It wasn’t for sale when I built my trigger, but we have similar feature sets (I wanted mine to be more adaptable and smaller). I built it over several months last autumn.

The strobes are on lightstands, SLR on tripod. They all get very wet

General specs of my trigger: 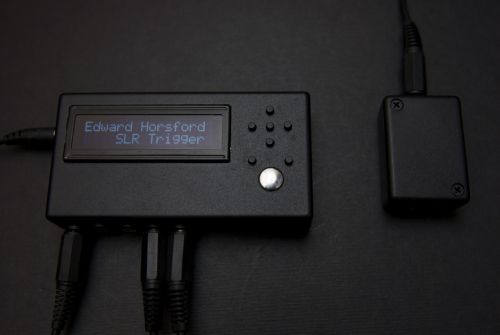 Connection is all through 3.5mm audio jacks. All sensor electronics are kept in remote sensor ‘modules’, powered from the main device:

I am shooting in the dark. I try to set up as the sun goes down, so that I’m not up too late. I wear a lightweight jacket with many pockets, and have a flashlight to move around. I use mount the flashlight shining on me to pre-focus the shots. London has a fair amount of light pollution, so I tend not to trip up too much. When I get my wireless flash system working, I plan to make a wireless torch for use in pre-focusing, etc.

DIYP: How are you popping the balloons?

Edward: The balloons are popped differently for each shoot. Generally I use smallish balloons so that when filled the rubber is very taught (it’s actually quite a challenge to find balloons of the right size). I have a long piece of sharpened steel rod that I use to do the popping. I can mount it on a stand or in the air. 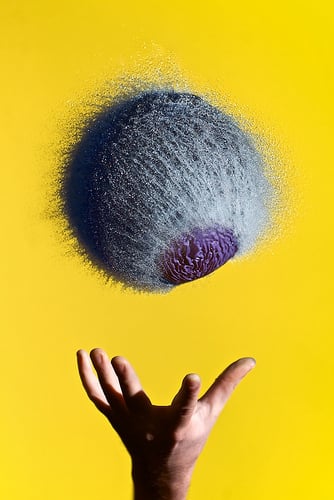 DIYP: How do you get them to explode so nicely?

Edward: Most of my shots have the balloons filled with water (and some dye usually). I have tried spraying them and various other ideas, but have yet to get something I’m happy posting. Popping 30-50 filled water balloons with dye means that at the end of a shoot I tend to look like a Jackson Pollock painting. Most amusing, except that it’s pitch black so no-one can see. 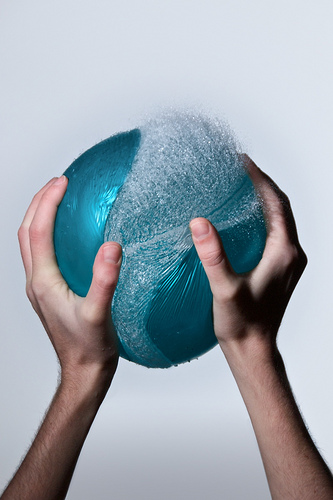 DIYP: What advice can you give to some who want to pop balloons and photograph them?

Edward: Planning – I spend several hours planning each shoot and what I want to achieve

Think of new angles that haven’t been shot before – I specifically avoid presenting the regular balloon shape.

Experiment – even with all my planning, I’ll still try different timings and positions. Who knows what will work. Sometimes a mistake in timing has created my best shot.

Post production – even the perfect shot will have some blemishes. I will correct exposure and contrast, remove unwanted elements, rotate and crop, etc. A little work can go a long way to making an image special.

Edward: sure (Diagrams courtesy of Sylights)

This shoot was all about experimenting with extremes of colour. I set up my lighting to let me have a coloured background (only limited by the gel colours I have). The balloons had varied mixes of dye, selected to compliment or contras the background. Because of the coloured light on the background, it was extra crucial that none of it spill on to the subject. Even though this shot has a yellow balloon with yellow background, it would look awful if the yellow light had spilt – akin to shooting with a clear balloon on white background, and using ‘colorize’ in photoshop. The working area was extremely tight, and meant that getting the balloon in to position without blocking one of the flashes was particularly challenging. 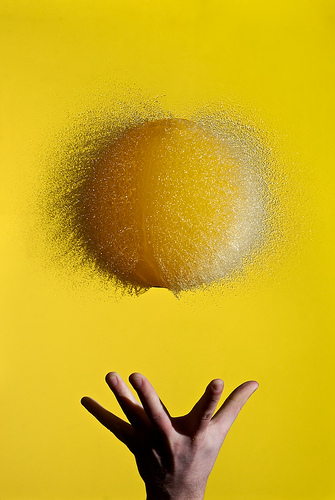 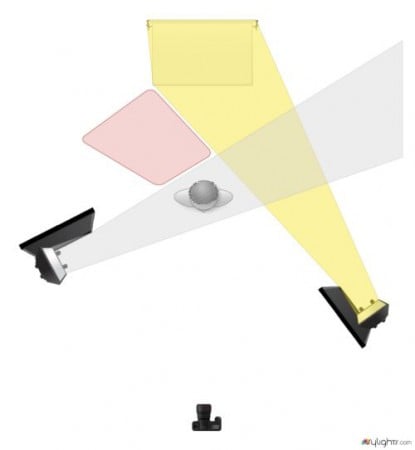 Diagram description: One speedlight used to illuminate subject, gobo’d to prevent any spill on to the background. The Other speedlight with coloured gel directed at backgrop – as front-on as possible to get the most even illumination, with gobo to prevent spill on to subject. Small working area (in red) from which to launch water balloon.

For this shot I was looking for the ‘instantness’ of the balloon popping. Where my previous shots had had the balloon in mid-air, this is one of the few were I’ve actually been holding the balloon. So many of the existing shots on flickr are of water balloons in hand, so this had to be technically perfect. The lighting must be very precise to prevent any spill on me (I’m entirely in frame). It took many takes to get the timing just right to have no trace of the balloon rubber visible, yet still a solid body of water with minimal spray. In post I’ve lightened the body of the water slightly, and adjusted the yellow to be warmer (my food yellow dye has a slight greenish tinge). 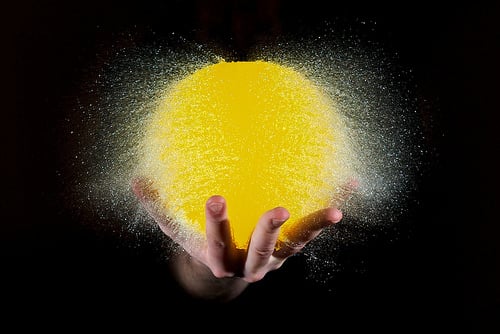 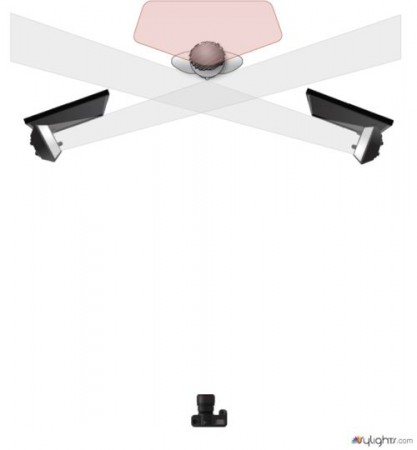