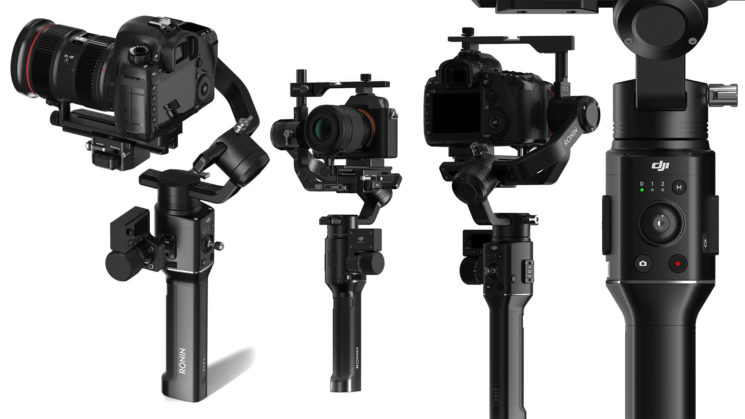 DJI’s line of Ronin camera stabilisers, however, is very well regarded, and they work pretty flawlessly. So, when DJI announced a handheld 3-axis stabilised gimbal for DSLRs and mirrorless cameras, a lot of people got excited. But the big concern was the price. DJI’s gimbals haven’t exactly known for being low budget. Now, though, we learn that the Ronin-S is actually less expensive than its closest competitor, the Zhiyun Crane 2.

The DJI Ronin-S is a gimbal that a lot of people have been waiting for. The Crane 2 has dominated the handheld camera gimbal scene since its release, thanks to its large load capacity and built-in follow focus. While the Crane 2 has mostly been fine for my needs (see our review), it has been plagued with issues. Notably, that promised features either haven’t been delivered or don’t work very well.

The Ronin-S, on the other hand, will likely be as solid as just about every other product DJI have released. It’ll just work. And if it doesn’t, DJI are usually pretty quick on the firmware fixes to solve those issues. The Ronin-S says it comes with similar app features to the Crane 2, such as panorama, 3-axis timelapse, motionlapse, and tracking. But I would imagine DJI’s will probably work better.

So how do the basic specs compare side-by-side?

On paper, there are only a couple of differences. The Ronin-S appears to run off a single 3.7v 18650 battery, whereas the Crane 2 uses three, for an 11.1v operating voltage. But the biggest is that the Ronin-S gimbal itself weighs around 50% more than the Crane 2. This may turn out to be a bit of a blessing, helping to keep that Z-axis bounce minimised. But that extra load is bound to tire you out a little sooner.

Both have a similar load capacity. The Ronin-S does take a slightly heavier weight, but how many of us are really going to approach the limits of either gimbal with a DSLR or mirrorless camera? Both also have some kind of focus wheel, too. Exactly what compatibility the Ronin-S offers, is unclear, but they also offer an optional focus motor for systems that aren’t or for using manual focus lenses.

This is something Zhiyun also had to do to bring compatibility to certain systems with the Crane 2. Although it’s worth noting that Zhiyun have now said that the follow focus motor is being included with the Crane 2 gimbal as standard now. It’s not an optional extra. So, something to keep in mind.

One of the key advantages of the Ronin-S, though, is the design across the back of the camera. One of the annoying things about the Crane 2 is that the roll axis arm covers the camera’s LCD. With the Ronin-S, the whole thing is angled so that the roll arm doesn’t impede the operator’s view. I feel quite limited in camera choice and movement sometimes with the Crane 2. I have to either use something with a flip-out LCD or just shoot with the LCD mostly covered and find out afterwards whether I got the shot I wanted or not. 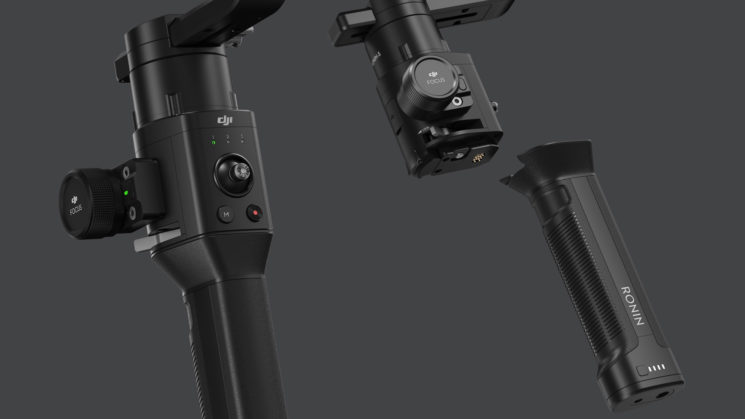 Another advantage of the Ronin-S is that the handle is removable. This allows you to mount it on an RC buggy or other device where you can get your centre of gravity lower down to prevent tipping. This is super handy, and something I wish I could do with the Crane 2.

The Ronin does look like an overall more versatile system, and I’ve no doubt it will be able to stand up to the task. It will certainly give the Crane 2 a good run for its money, and probably eat a big chunk of its audience at this price point.

The DJI Ronin-S is available to pre-order now for $699 (B&H / DJI) and starts shipping on 2nd July. It is also compatible with DJI’s Master Wheels and Force Pro controllers.

« Kickstarter campaign reveals Yashica Digifilm Y35 updates
35mm, 55mm, 85mm or 70-200mm lens for portraits: which one should you buy next? »