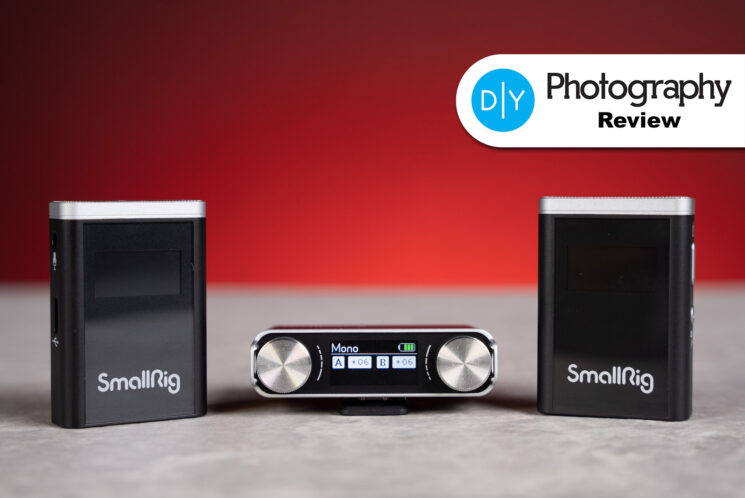 It seems like the new videography gear t get the “everybody makes one” is the wireless lav. RODE were the first with their RODE GO and RODE GO II (reviewed here), and now you have them from Godox, Joby, DJI, and many more.

SmallRig, who by now is making a lot more than cages and rigs, are the last to enter this product nitch with their Forevala W60. We took the unit for a spin, and this is what we found out.

The Forevala W60 is a small dual mic 2.4Ghz wireless lav. It has two small wireless transmitter units that act as microphones and one receiver unit that you plug into your camera. All three units are a tad bigger than a small matchbox size.

The unit is 2.4Ghz which means you don’t need a special license. Sadly, it also means you may encounter transmission issues in saturated locations with lots of wireless gear. 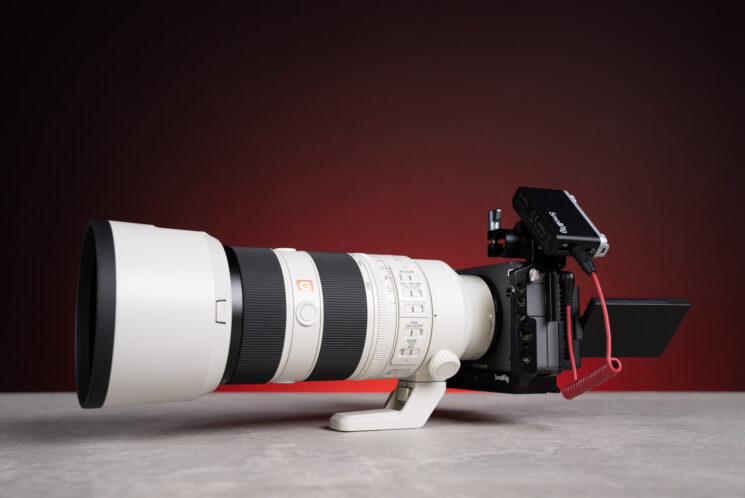 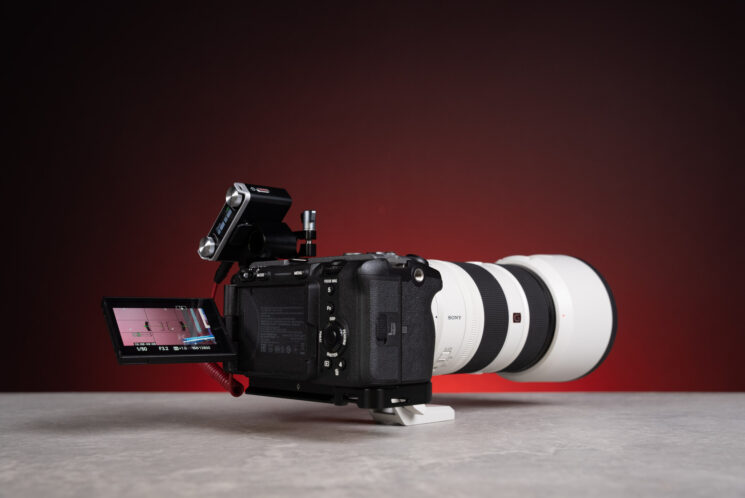 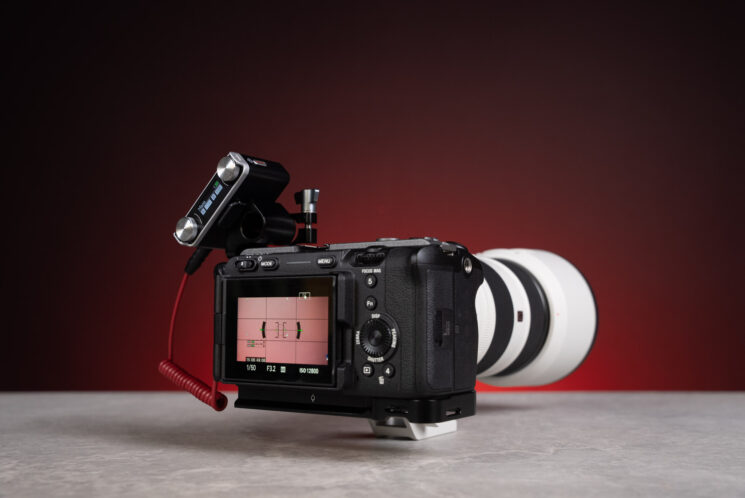 The W60 has a plastic matte black finish with some silver accents. It is a bit longer and thinner than other brands, so it is pretty discrete when you clip it to your shirt.

Both the RX and TX units have a clip that is a good fit for any camera or cage’s cold shoe, so you can easily mount the receiver on your camera.

You can use the units right out of the box, as they feature an internal microphone. On top of that, the transmitters do have a 3.5mm jack for a lav mic, but SmallRig does not make dedicated lavs, so you’d need to get one from RODE, Sennheiser, or the likes. 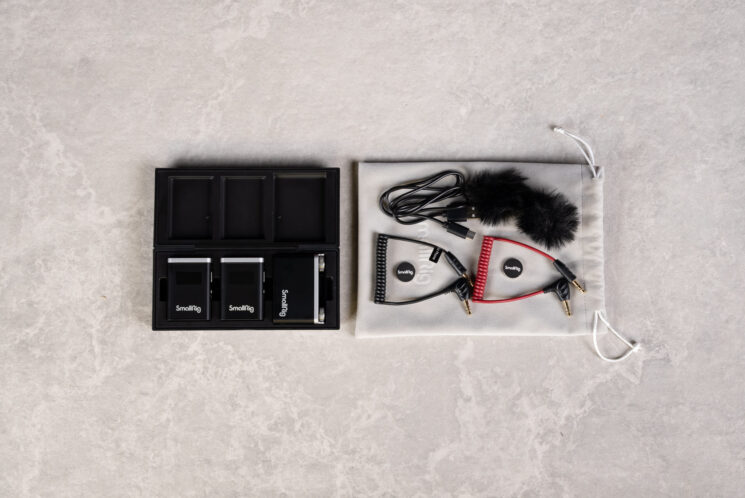 As mentioned, the units themselves are quite small, light, and comfortable to clip. (33 grams, and about 5.5×3.5×1.4 cm). The transmitter can quickly go either on your neck, a belt, or a back pocket. SmallRig also include a couple of black magnetic discs that you can use to clip the lav under your shirt. 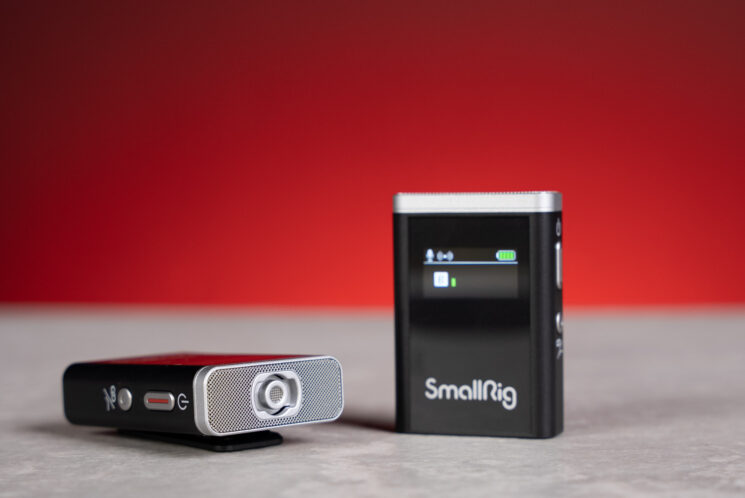 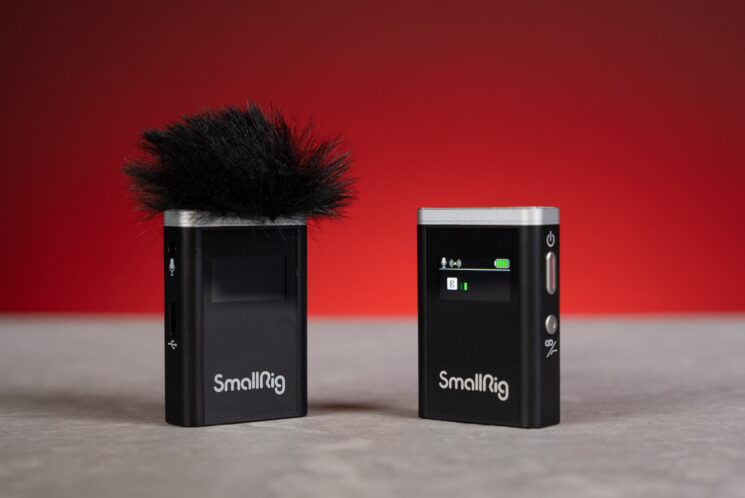 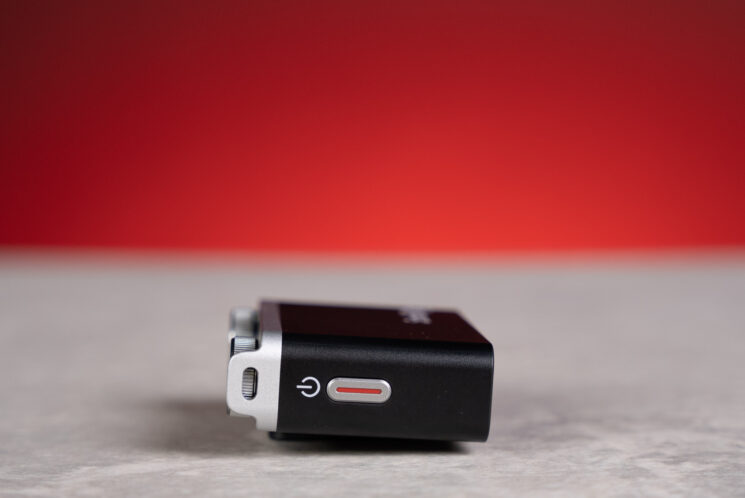 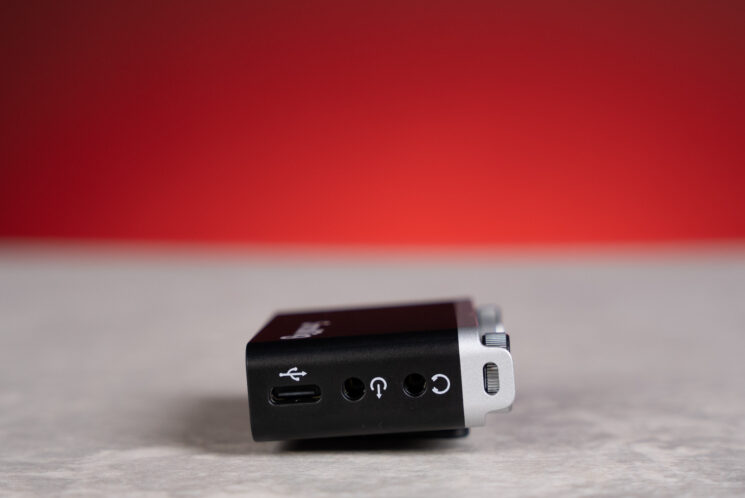 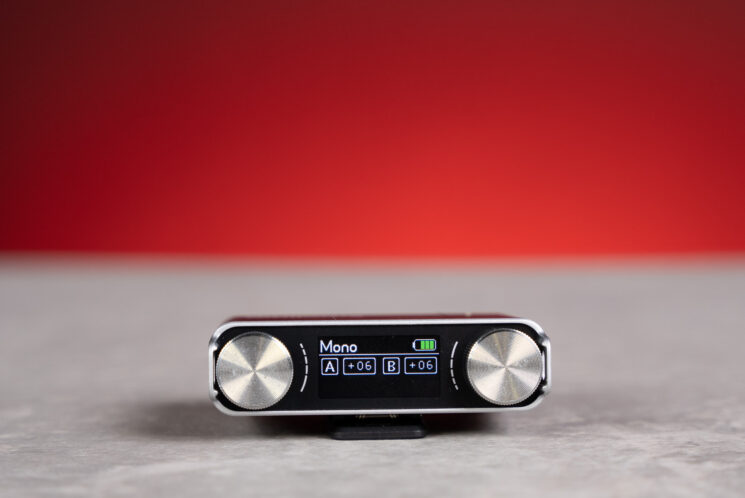 The external lav port is placed to the side, making it a bit uncomfortable to plug in a mic. The RODE GO II, for reference, has the plug on the top.

One thing that I liked is that the transmitter and receiver units are very different in appearance. On a set, especially a dark one, it’s straightforward to pick the right unit immediately out of the box.

Unlike some newer units, the Forevala W60 does not feature internal recording.

Unless you get an external lav, you depend on the built-in microphones in the transmitter units. For my personal taste, the mics lack some bass and are heavier on treble. That can be easily solved by plugging in a lav mic with your favorite signature.

Each mic has six volume levels and a low-cut filter. Interestingly, you control the volume from the receiver while the low-cut button is placed on the side of the transmitter. If you use only one mic, there is no option for a safety channel at -20DB. This is a useful feature that we have found with some of the more advanced microphones.

There is also a tiny dead cat “button” that you can mount on the mic to control wind noises.

Here are some audio clips for your reference.

Control of the Forevala W60

The main control for the unit is done via the receiver with two physical knobs. I am sure I mentioned it before, but I love physical knobs. They make things easier for the operator. On the good side, you can see which mics are connected (A, B, or both), and you get a very responsive levels indication for each mic with an indication for clipping. Sadly, there is no indication if the low-cat filter or mute functions are engaged.

The two transmitter units also feature a nice responsive RGB monitor. Aside from being a nice gimmick, you will probably not have access to those when they are under your shirt of clipped to your belt.

SmallRig boasts a delay of 15ms. We tested this by connecting the unit to a TASCAM DR70 recorder, a first-generation RODE GO, and a RODE NTG5 connected directly into the Tascam. 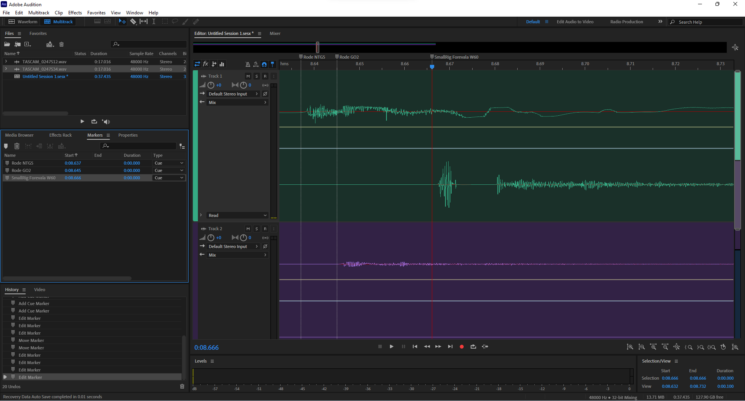 Looking at the waveform in Audition, we took the NTG5 as our zero delay point of reference. The RODE GO peaked about ten milliseconds after the NTG, and the W60 about 25 milliseconds later. (as a reference, the Godox move link 2 took about 50 milliseconds to respond).

The Forevala W60 has two outputs: One TRS Line 0utput, and one headphone jack. Kudos to SmallRig for including a headphones jack, as it allows audio monitoring before the audio enters the camera pre-amps.

In terms of mixing, you can control how the channels behave. In the first mode, each microphone goes to a different channel, so one microphone goes to the right channel while the other goes into the left channel. In the second mode, the W60 mixes both audio signals into a single mono track that goes on both channels.

We measured a range of about 30 meters outdoors which is consistent with similar systems in this price range.

Along with the microphones and receiver, you also get a hard case. This case is great for keeping your gear safe and acts as a charging station that can charge all three units from a single USB port. (You can still charge the units individually, as each has a USB-C port, but the case is much more comfortable). 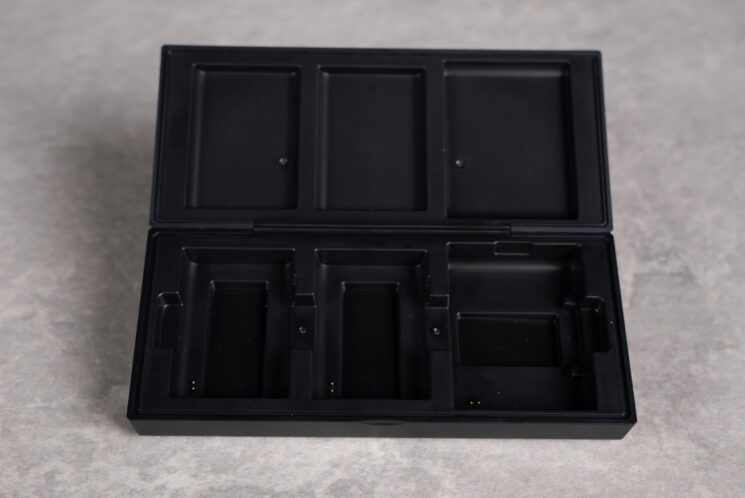 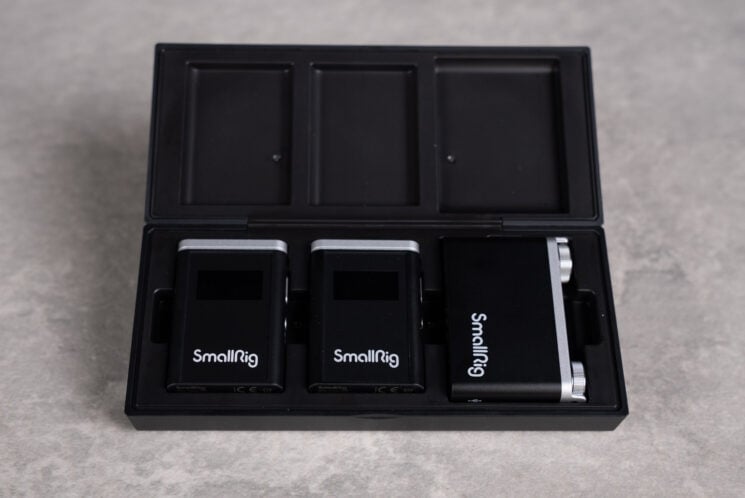 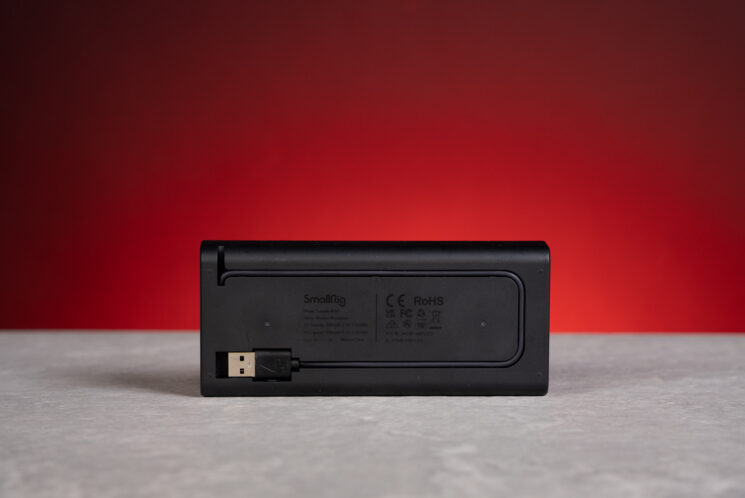 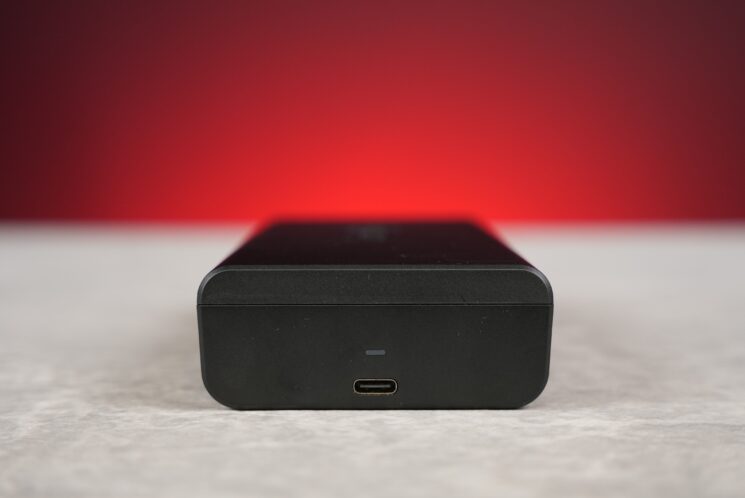 The entire system lasts about eight hours on a single change.

There is also a soft pouch, which is a nice touch, but I am not letting go of my hard case!

The SmallRig Forevala W60 is a decent microphone in the mid-range price. It would be interesting to see where SmallRig will take this line.

Ophir Peleg is a commercial photographer and videographer based in Tel Aviv, Israel. Ophir mainly shoots commercial work, but will occasionally shoot funny videos too.