Rebecca Litchfield is somewhat of an un-categorized hybrid, she shoots fashion (and does it darn well), but she is also very well known for her urbex (urban Exploring) photography. I’ve been following Rebecca Litchfield’s work for a long time, but it was only when I saw her great talk over at the photography show that we made the connection and started an interview. I knew it was going to be fascinating, I just did not know how much. 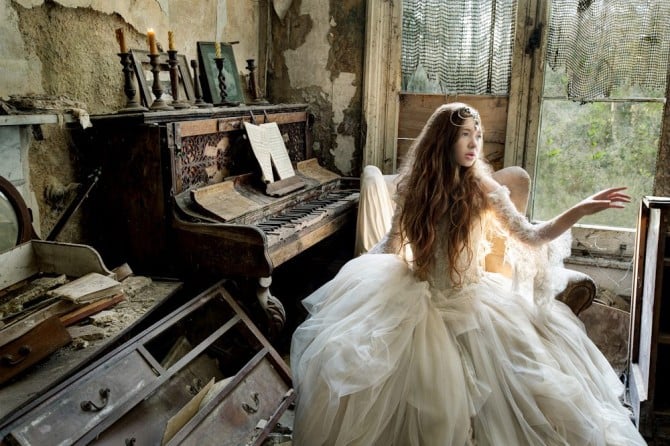 DIYP: Can you tell us about your background and how you got into photography? What do you actually do?

RL: I have been a photographer for around 8 years, I studied a master degree in fashion photography at The London College of Fashion and in 2010 I became a freelance professional fashion photographer. For two years I worked for clients such as Katie Melua, Quartet books, Charbon Lond, Three Floor Fashion, Beefeater 24 Gin amongst others and shot editorial work for many magazines to include Sunday Times Culture Magazine, Papercut Magazine, Chaos Magazine, Stylist.

It was 8 years ago actually on the 24th November 2005,  I stepped foot into my first abandoned building, I  remember getting up very early on a Sunday morning, walking around the whole perimeter trying to find entry over the huge metal fence with no luck, and so spent the next 30 minutes digging a hole big enough to squeeze underneath and when through nothing could have prepared me for how it felt to be walking around the corridors of a Victorian asylum, long forgotten, but yet its memories floating in the air on a breeze. 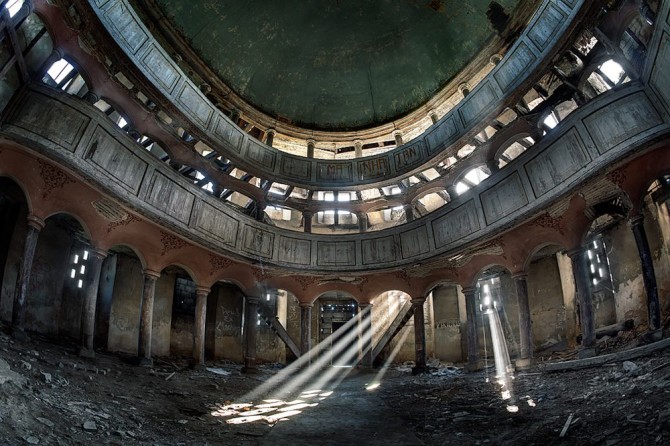 Canehill opened in 1882 a full 100 years before my birth, in 2008 in closed its doors completely, a 100 year history left to rot and decay. For me for me this was my first experience of being in a place that had almost frozen in this time. Now it is gone forever, it’s like it’s been erased completely, photos and memories all that remain. I wasn’t a photographer then, but I felt a connection with the peeling paint and memories left in limbo.

It was in 2012 that I did a zombie engagement shoot in an abandoned warehouse with a friend who did a lot of urban exploration and after that he invited me out again and I became addicted to photographing abandoned building. I had been to couple of asylums previously but it was just two years ago that I really fell in love with exploring, it’s not just the taking photos and going to places but also the experience of sharing road trips with friends. 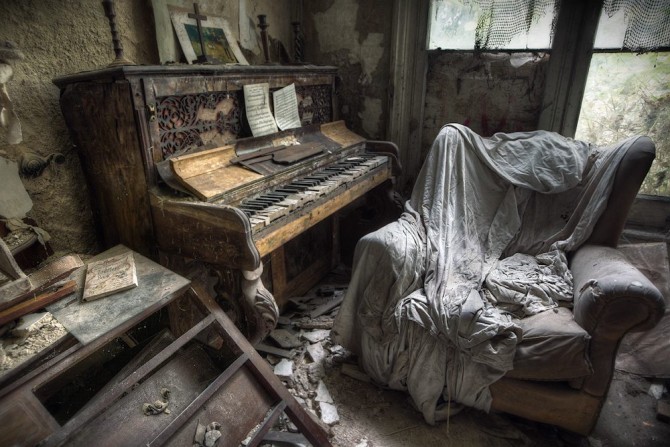 DIYP: What does it feel like getting arrested? was it worth it?

RL: I’ve never actually been arrested. I try my best not to get caught, but sometimes it does happen, but normally only by security, who just end up chucking you out. Only twice I’ve had police involved, but after a search to make sure we didn’t steal anything, they let us go. 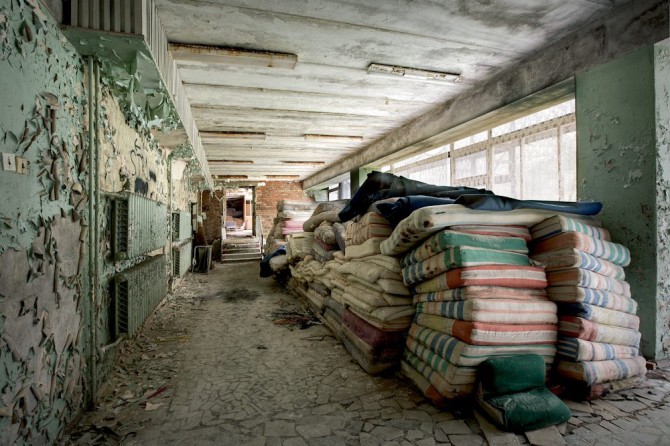 The only dramatic capture I have had was in Russia by the military at a secret military radar base, When we arrived we could see a guard at the gate so we snuck round and went through the forest once we saw the radar, we were suddenly surrounded by military, to cut a long story short, we were detained by the military for 12 hours, interrogated for an hour each separately with a translator and finally released when we persuaded them we were not spies. Looking back I laugh, but it could have been a whole lot worse. But defiantly a story to tell the grand kids 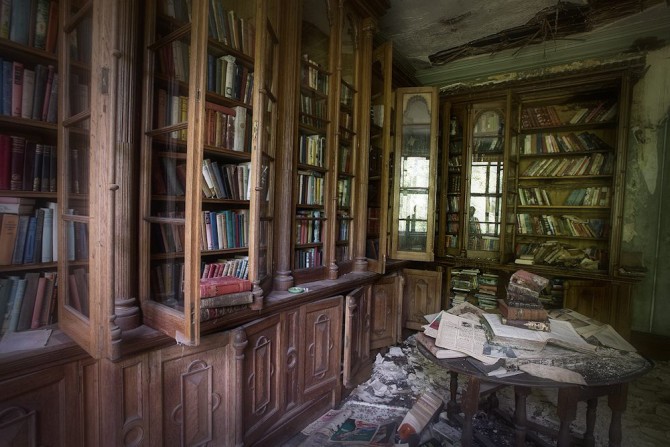 DIYP: Do you ever move stuff around to get a more photogenic photograph?

RL: I mostly photograph what I find, I have only once total re arranged room, by dragging things from downstairs up, but that’s because it was too dark to photograph. The majority I shoot as I find it, I will move the occasional object if it looks better in the photos. Most of the things you find have all been moved at one stage anyway and it’s always good to get a different shot to what others have had before. I normally arrive in locations and other photographers have set things up to make a photo. I just take what I find really. I’ll never take something into a location. 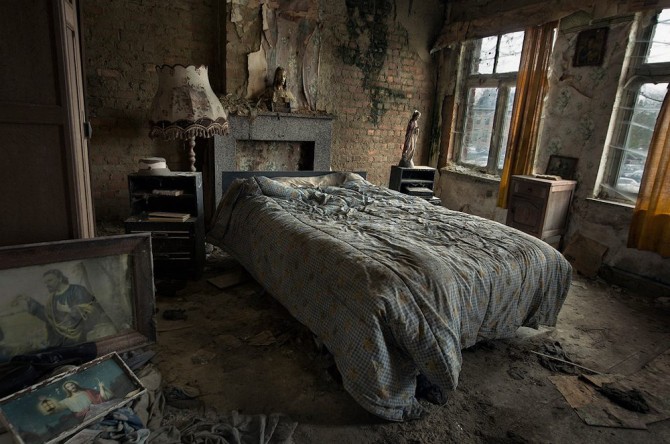 DIYP: how do you find desolated locations worth shooting? how do you get in them?

RL: It takes hours of research to find the locations I go to, long periods of time are sent researching on google and looking on google maps, road trips take a lot of planning. Getting in is always a challenge, we will never break and enter, most of the times there are broken windows, or a fence to climb over or under, but sometimes getting in takes a little more thought 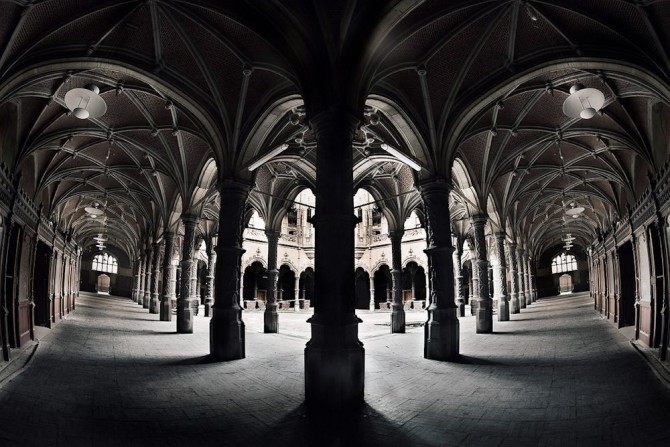 DIYP: What is your weirdest experience with shooting a deserted location?

RL: There’s so, so many I could talk for hours on all the different experiences I have had on missions around Europe. We’ve rowed across lakes in an inflatable boat at 4am in the morning to see an underwater ballroom, been ordered to our knees by 10 armed police in Belgium, I came across a mannequin made to look like a dead body, heard shooting on top of a Soviet monument in Bulgaria by a tramp who was trying to get cigarettes from us. I’ve ran through a filed with a bull in to get to a location, slept in two abandoned asylums, the list is endless. But it’s all a ton of fun, life for me is about having these crazy experience that make me feel alive. 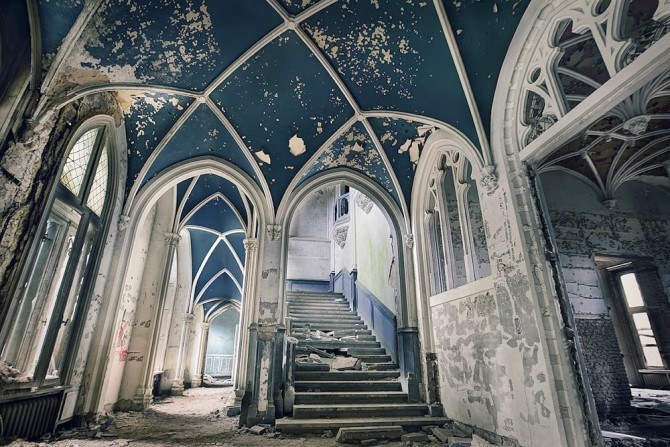 DIYP: Do You ever return to the same location and shoot it again?

RL: When I first started doing this, I wanted to see everything and going back to places didn’t really interest me, but now that I have bettered by techniques and processing I am quite happy to go back, if I feel there are more shots to be taken and better ones then the last time I went, as some places I wouldn’t have seen for over 2 years, it’s also nice to go back and see the process of the places decay. 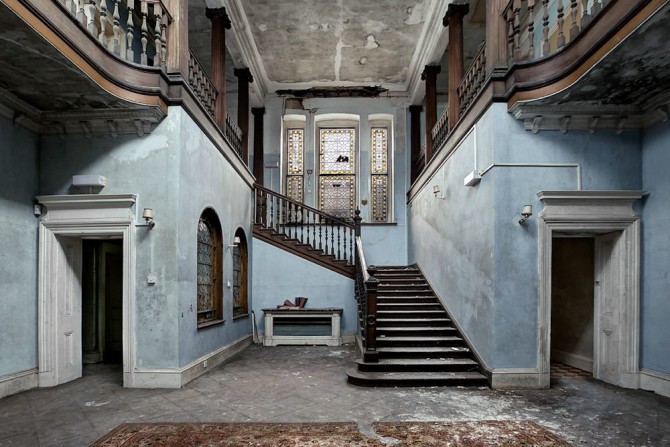 Of course with my new series the Underworld Realm, I am going back to the places I have already been, to shoot models and create imaginary scenes. The last two years have really been about finding locations for these shoots, so it’s great that I am now making them happen.

DIYP: What kind of gear do you use and how does it impact your travels?

RL: I am actually in the process of changing my equipment that I take exploring, until now I use a Canon 5Dmk3 and 90% of the time use the 16 – 35mm 2.8 lens to capture the abandoned buildings, I also occasionally use a 50mm for still life shots and the 10 – 17mm Tokina lens to get an extreme wide-angle view of places. For my underworld shoots I also take a 85mm 1.2 as the wide aperture is amazing for close up shots. 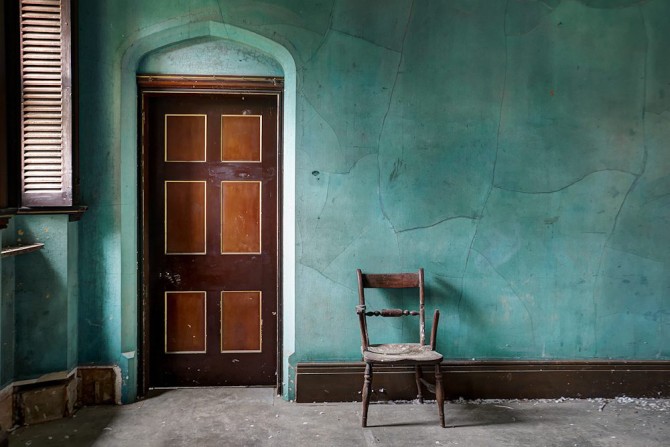 I have recently got my hands on an Olympus OMD EM1, which is pretty likely going to become my new exploring camera, due to its size, it means I will be able to take minimal equipment, just the Olympus 7 – 14mm lens, Olympus macro lens and Olympus 9mm fisheye. Having small amounts of equipment will be amazing as we spend many hours walking around locations and sometime we end up climbing things, running from security, so it will be great for me to downsize.

DIYP: I saw that you started incorporating live models in your shoots, what are the challenges involved with this kind of shooting?

RL: It makes is 10x harder then it normally would to get the shots and even just taking photos of the buildings is hard enough, it takes a lot of research and effort to travel to and then get into places, find the places to shoot, getting the shots and then escape without being seen. 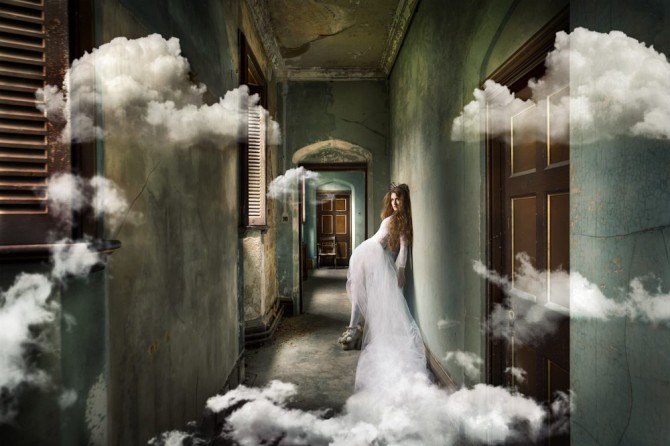 But when I take models and a very small team (never more than 4 people) it makes it even harder and a lot of planning is involved. I always feel very pressurized when doing these shoots as a creative team is involved, who have all put effort into the shoot, so it’s not just me losing out on photos if we get caught or for some reason we can’t get into a place we had planned the shoot in. 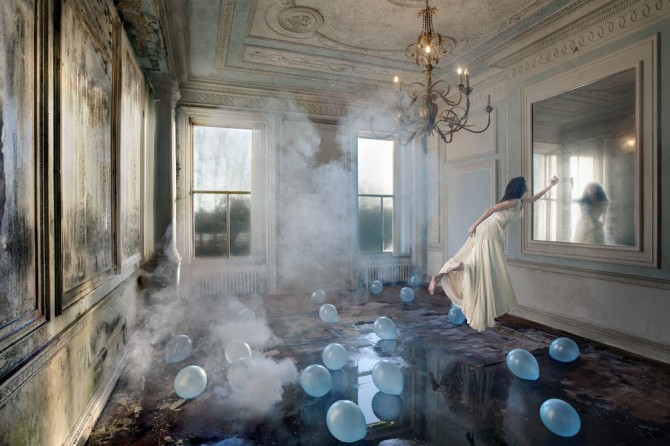 My heart pounds in my chest on the drive to the location and the getting in and there is always a huge amount of relief when the makeup is done and the first shot captured, from then on any shots taken are like gifts and there is a massive sense of accomplishment when all shots are taken.

These shoots take many weeks planning, but it is always a help that I have visited each place in advance as then I know exactly how to get to where I want to shoot so there is no messing around trying to find places. 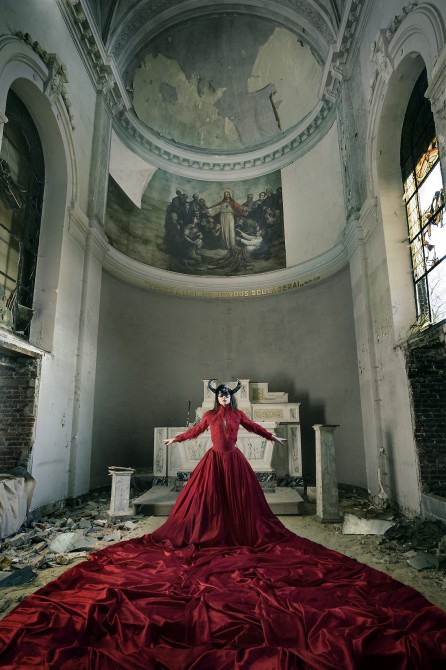 DIYP: What are Soviet Ghosts?

RL: In 2014 I was commissioned by a publisher to go and photograph the abandoned buildings of the former Soviet Union. I travelled to 13 countries in Eastern Europe, The Baltics, Ukraine and of course Russia to capture what is left from the collapse of the Soviet Union such as forgotten towns, factories, prisons, schools, monuments, hospitals, theatres, military complexes, asylums & death camps across the former communist states. 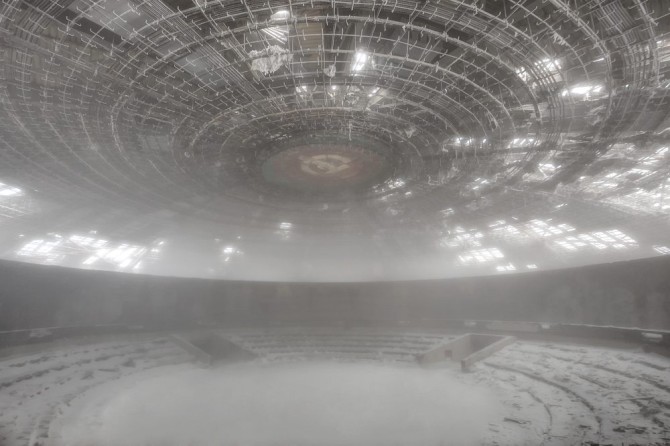 The former USSR was once a thriving place, but with the fall of a Communist empire places like derelict, uninhabited, broken shells of a forgotten time. The collapse of The Soviet Union, after almost a century left haunting memorials of the ordinary people who once lived and worked there. My work shines a light on a society shrouded by the cold war, offering a unique and touching document of the daily lives of the Soviet people. It is available to buy on pre order on amazon and due out in August 2014. 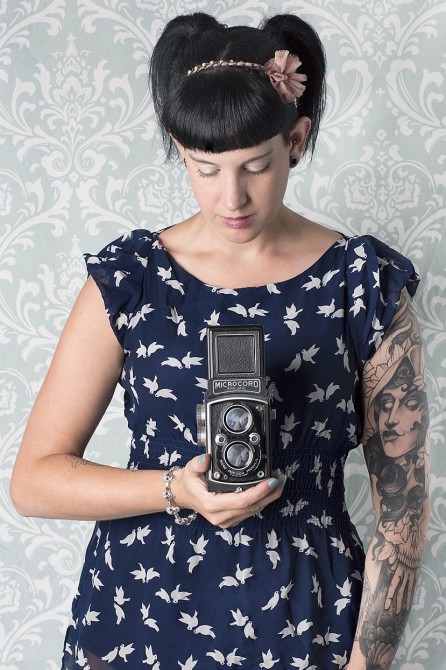