The World Cup has been thrilling so far. Despite the Australians bowing out early with three straight losses, I have loved every minute I have seen as the world’s best compete. With just four games to go, the excitement is high as the world wonders if Brazil could achieve a World Cup victory at home. 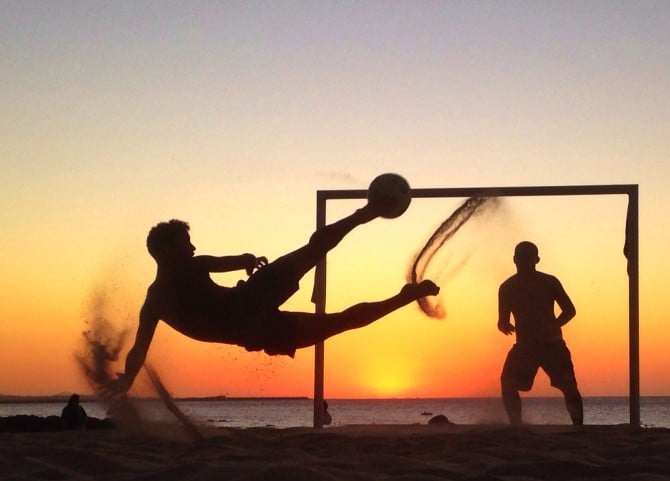 Robert Cianflone, a Getty Images photographer, is one of those photographers. In 2014 alone, I have followed his Instagram account with awe has he covered both the Olympics in Russia and now the World Cup in Brazil. I was curious about what it is like to be covering the World Cup, so I reached out to him to get some answers.

Peter: You are assigned as one of the official Getty Images photographers over in Brazil to cover the World Cup. Just how does one gain the opportunity to shoot for Getty Images and travel the world covering events like this?

Robert: In March 1996 I started working for the Leader Newspaper Group in Melbourne, covering general news, features and sport. At my time at Leader it was myself and another photographer who shot a lot of sport on the weekends for the paper, and it was one weekend at a VFL match that I met a photographer from then Australian sports agency Sporting Pix run by Tony Feder. Tony asked for my number just in case they ever needed a freelancer to help cover events, but by March 1998 I was offered a full time gig, and have been there ever since, through the ALLSPORT take over in October 1998 and shortly thereafter Getty Images in late 1999.

So you could say I was in the right place at the right time and before long I began covering assignments interstate such as cricket and AFL.

At the start of my career with Sporting Pix no one was as interested in Soccer as I was, so I went on to specialize in soccer as I had a passion for it.

I’m now well into my 16th year and can’t think of anything else I’d rather be doing. When working for an organization like Getty Images or any other agency for that matter you have to be a team player. Anyone who thinks they are there for themselves is pretty much found out and won’t last long in a team environment. Teamwork when working on a major event is paramount.

For our readers who may not know what is involved in being on assignment during a major sporting event like this, just what does a standard day for you entail during the World Cup? Do you purely shoot and hand the images off to an editing team or are you expected shoot and edit and have images sent to your office shortly after the game?

This is my third World Cup for Getty Images. At the 2006 World Cup in Germany and 2010 in South Africa I was assigned to cover the Socceroos. This entailed covering all training sessions, media calls and press conferences as well as the matches.

With the 2014 World Cup in Brazil I am assigned to a specific group division.

There are four photographers for editorial coverage and two photographers assigned to work for FIFA. We also have a technician whose job it is to make sure all our cameras and laptops are sending images to where they should be going and as well as setting up all the cabling required to get the images out to the editors.

Our group is known as POOL 3. We are assigned to cover 17 matches in total in seven different cities.

There are lots of early wake ups on match days to fly into other cities to cover games, then up again the next morning to cover another match in another city and so on. As Brazil is such a massive country the logistics are huge!

Sometimes we need to cover the odd training session and press conference. We also may need to do some daily life/feature images of the area we are based in, the coastal city of Fortaleza.

In terms of shooting a match we tether our camera’s via Ethernet cables, so as we shoot all our images are sent from the stadiums were are working in, to our editors in the Main Press Centre, in Rio de Janeiro.

I have two cameras tethered and a third body as back up, and our remote cameras behind the goal are also tethered. This speeds up the work flow so we can keep shooting and don’t have to download our cards. Our editors then select and edit the images that are required in order of news value, client needs etc. and they hit client feeds within minutes of us taking the shot.

In this day and age of technology clients want their images yesterday!

As the Authorised Photographic Agency of FIFA, Getty Images has a 75 person team at the World Cup, including 46 photographers, many of whom are football specialists, and 13 editors and support staff to capture every angle of events in Brazil.

Throughout the tournament Getty Images provides coverage at each of the 64 matches with at least five photographers at each match – one in each corner of the pitch and one in the stands taking overhead shots, plus two FIFA photographers who move throughout the space.  We also have many local freelancers working around the country covering any news or unexpected events.

Is there much competitiveness between you all to get the best shot or do you all help each other out and not tread on toes?

We all aim to get the best shot but at the end of the day we all get along and have a laugh. There is no “treading on toes” as such as most of us know each other well as we have all worked together at some point on other major events. We rotate our photo positions at every match so as we don’t sit in the same spot at every match. 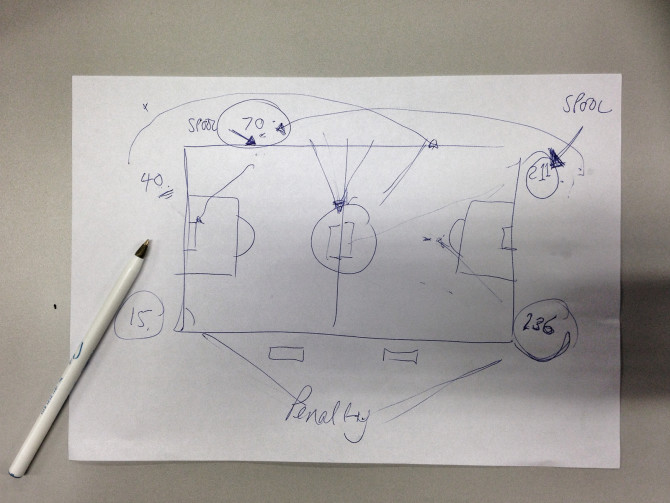 “If a match goes to penalties a couple of us have to move positions other wise you get blocked by the teams standing on the centre line. We then concentrate on our subject be it the team, goalkeeper or penalty taker, with all angles covered.” — Robert Cianflone. Image supplied.

Are you getting much of a chance to capture life beyond the games and exploring the culture of Brazil? Prior to the start of the games, there was some unrest with many objecting to the spending on the World Cup? How are you finding the atmosphere of both the games and the community? Has it been embraced and how are the population finding all the media attention?

I was in Brazil last year with Getty Images for the Confederations Cup which is used as a lead up to the World Cup. I actually stayed in the same city and covered matches in all but two of the cities I have been to this year. Last year there were protests in every city on match day. The atmosphere last year was tense at times with thousands of people blocking the streets around the stadiums making it hard to get in. I took the time last year to speak to some protestors about why they were protesting and their main objection was that the money used on the World Cup could have been better put to use on hospitals, schools, transport and local infrastructure. There were a lot of violent clashes last year, but this year it has been very calm, with almost no protesting.

Now at the World Cup, in terms of local atmosphere, the locals are really getting into it, with fans crowding the streets to watch games and celebrating if Brazil wins by firing off fireworks, tooting horns and cheering through the streets. As the Getty Image’s photographers are based on the north coast on the beaches it’s pretty hard to not just want to pull up a banana lounge and sip a cold one!

What has been your favourite / most memorable moment so far during the World Cup?

To be honest just being at a World Cup is memorable, whether you cover one match or 20 the atmosphere is just something else. For example, in our first round this year we had Brazil play Mexico, and the noise was just amazing. When you get two big South American nations playing a big match you are always guaranteed exciting football!

All images supplied with thanks by Robert and Getty Images.

« Let Me Know When You See Fire: What a Video Shot at 1000 FPS Looks Like in 4K
7 DIY Photography Tips Using Household Objects »