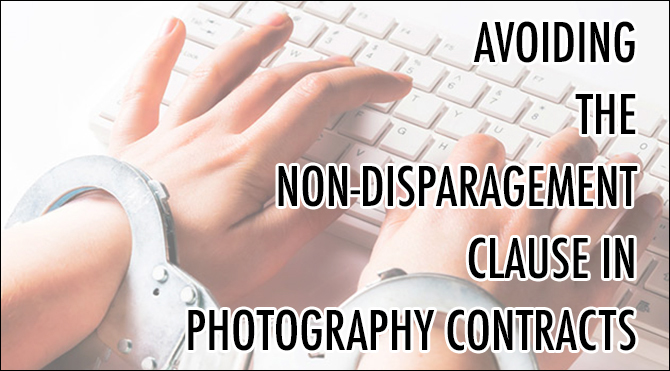 I’m often intrigued when my worlds collide. When I left my career as a lawyer behind, I never realized just how often it would encroach on– if not occasionally take over– my photography career. And yet, when it comes to model releases, client contracts, licensing agreements, protecting my copyright, and a host of other issues, I shouldn’t be at all surprised that my arsenal of legal knowledge and expertise still continues to pay dividends– even now, ten years since I’ve seen the inside of a courtroom. I usually see the legal issues coming a mile away, but a recent meeting with a new wedding client caught me completely off guard. She’d been referred to me by a mutual friend, but I was not the first photographer she’d interviewed. For the most part, it had been a very typical meeting. We talked about her venue, where she’d met her fiance, what she was looking for in a photographer– the standard stuff. She was flipping through a portfolio, though, when she looked up and asked a question that was anything but standard.

Does your contract have a non-disparagement clause?

Ummm…Does my contract have a what?

Dena went on to explain that the two photographers she’d met with before me each had clauses in their contracts that would forbid her from posting any negative reviews, comments, or feedback about them on line.

What?!? This is really a thing? I honestly could not believe what I was hearing. Surely she must have misunderstood them. Suddenly– as if anticipating my next question– she slid one of these contracts across my desk. Sure enough– the offending clause was buried in the fine print near the bottom page 3: “Client further agrees that they will not disparage Photographer, or post any negative comments, reviews, feedback, complaints, insults, or other counter-productive content about Photographer or services provided in any online forum, chat room, or message board, including but not limited to Facebook, Twitter, and The Knot.“

Wow. Even if such a thought ever crossed my mind, I seriously doubt I’d have the balls to actually put it in writing and ask a client to sign it.

While I was a little concerned that negative feedback was already on her radar this far in advance, I assured her that my contract contained no such clause. I explained that I’m confident enough in my photography talent and my customer service that I didn’t anticipate any negative feedback. Even if she had any, though, I also told her that I would be in no position to censor anything she had to say. All I asked was that if she ever did have a complaint, to at least come to me first and give me a chance to make it right before she took her frustrations to the internet.

As soon as she left I grabbed the phone and started making some calls. I called six photographers in five different states, asking two questions– (1) Do you have have a clause like this in your contract, and (2) Do you know a photographer that does? While I was not at all surprised that none of these photographers have clauses like these in their contracts, I was both surprised and a bit disheartened to find out that a few of them knew of at least one photographer who does.

Additional research– and bourbon– was needed.

Interestingly enough, one of the things I learned is that most of the photographers who hide behind these clauses are far less obvious than the photographer who authored the excerpt I quoted above. Rather than send up a bright, flaming red flag like he did, most photographers who find this practice necessary slip a well-placed word or two somewhere deep within the not-so-ethical fine print. A client eager to sign their contract might not even know it’s there until it’s too late.

While we all need to protect our businesses and reputations, I think the manner in which we do so is just as important. Our reputations are formed just as much by the people who don’t hire us as they are by the people who do. In an effort to insulate himself from negative publicity, the photographer who wrote the clause above damaged himself in ways he never stopped to consider. Any reputable business– in any line of work– should not only strive to avoid negative comments and feedback through hard, honest work, but also to learn from their mistakes when negativity does rear its ugly head. Contractually denying clients the opportunity to air their grievances practically screams from the rooftops that the photographer in question is not only expecting the worst, but is already planning on where to hide the body. The fact that they go to great lengths to hide the clause in the first place should speak volumes about how (dis)reputable this practice must be.

So, how do they get away with it?

The simple fact is that too many people don’t take the time to read contracts in their entirety, which means that they are at least partially to blame for not fully understanding what they are signing. The fact that there are photographers attempting to cash in on this is an embarrassment. Unfortunately, less-than-scrupulous business practices are not always illegal. This would be one of those times.

Whether these non-disparagement clauses are ultimately enforceable as a matter of law is a question that has yet to be answered. On the one hand, the law (inaccurately) presumes that people have taken the time to understand the contracts they sign. On the other, there are public policy concerns that go beyond the “four corners of the contract.” While it’s technically not a free speech issue since there is no governmental involvement, the courts are going to be very hesitant to find in favor of someone who is deliberately trying to keep you from speaking your mind. That’s not how the marketplace is supposed to work.

The best defense against these manipulative contracts will be clients like Dena who take the time to read the fine print and realize that when something doesn’t seem right it probably isn’t. Photography, unlike many other professions, has no governing or licensing body whose job it is to keep an eye out for questionable business practices. Whether we need such a body, how it would work, and the impact it would have on how we do our jobs are questions for another time. For now, though, let’s continue being the kind of photographers we would want to hire ourselves, and hope that the photographers hiding behind non-disparagement clauses keep driving business our way.