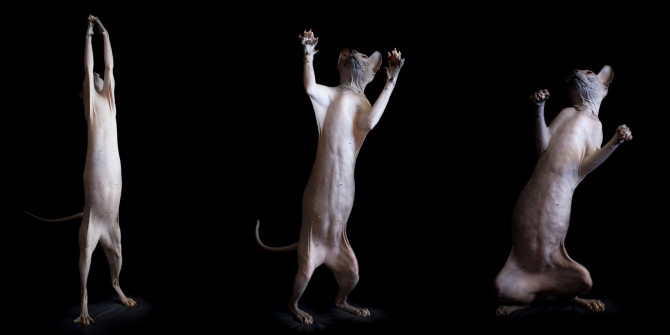 For Alicia Rius, photographing animals comes naturally. Her portfolio is brimming with gorgeous fine art photos, in which you’ll find an assortment of four-legged subjects ranging from horses to hairless cats. Rius was born in a small town in northeast Catalonia. She would earn a bachelor’s in Advertising and a master’s in International Marketing, before eventually taking a job as a project manager for an ad agency in Amsterdam. Not that the work at the ad agency was dull, but it left Rius wanting something more.

While she was still working at the ad agency, Rius’ husband was offered a job in San Francisco. Rius wanted to seize the opportunity to reinvent herself. Her lifelong love of animals inspired Rius to move into full time animal photography. 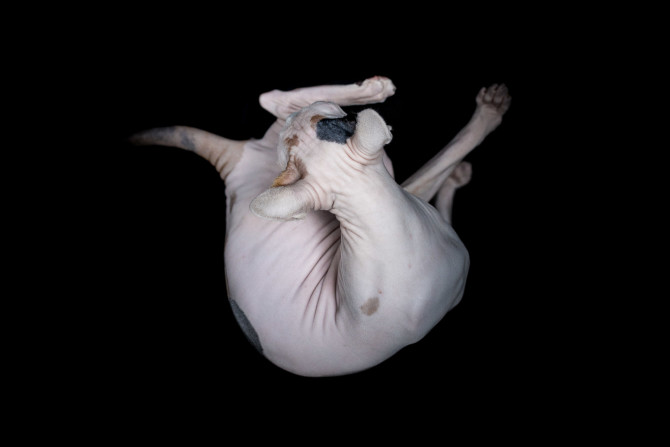 For one of her latest projects, Rius focuses on Sphynx Cats, a breed of cat most commonly noted for it’s lack of hair. Rius explained that she was drawn to Sphynxes for their alien like appearance.

“Sphynxes (hairless cats) fascinates me in many ways. I’m drawn by their alien look. There’s something disturbing yet eerie that keeps me astonished every time I look at one. Without fluffy and fancy coats, this breed shows what a true cat is. Everything is raw, exposed, vulnerable.

This body of work is an exploration of the beauty of Sphynxes within their oddity.” 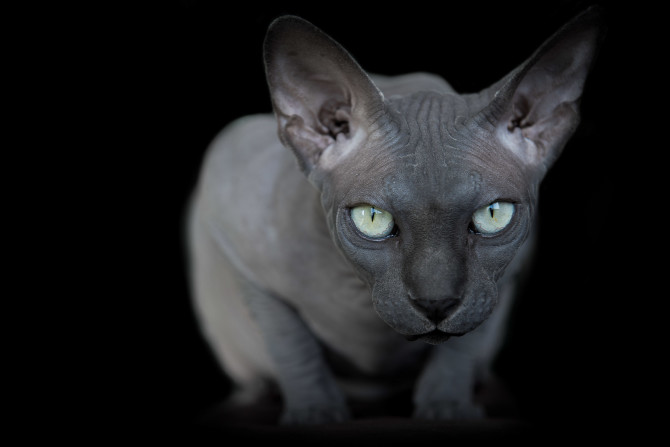 Working With The Cats

Rius’ collection of portraits proves that looks can be deceiving. Though the cats often appear to angry and intimidating, the photographer explained that it’s quite the opposite. She notes Sphynxes typically have friendly personalities and are very playful. Because the cats are hairless, playing can be a good way for the cats to keep themselves warm. 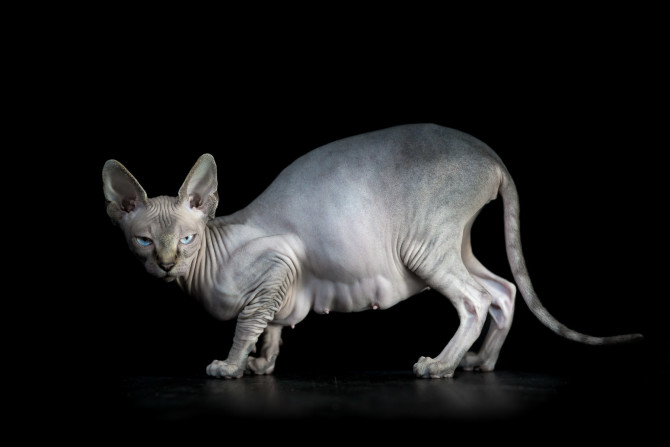 After securing three different Sphynxes to photograph by putting a request out on Facebook, the next step was to start photographing. For two of the photoshoots, Rius was able to photograph them in their own homes. But, since Rius shoots only with natural light, the third cat was transported to a friend’s loft due to unfavorable lighting conditions in the owner’s home.

“My approach when I photograph Sphynxes is almost identical as when I photograph other animals… The only thing I did different this time, was to have extra patience in order to get the shots I had in my mind. This work is an exploration of their bodies. Without fluffy coats, you can see the real anatomy. They way their skin twists, the bat-alike armpits, are the things I wanted to capture… These are things that you could have never seen in a hairy cat. For example, the photo of the open paw it took me 3 different cats until I got it the way I envisioned it. It wasn’t easy and I had to try many different things to accomplish it.”

Using a simple backdrop, some cat toys, and treats Rius let’s the cats enjoy themselves. She allows them to smell and investigate all her equipment and, as soon as they’ve satiated their curiosity, Rius starts playing along with them, snapping photos of them as she goes.

Now head over to her website, Facebook, and Instagram to learn and see more, you won’t regret it! (And, because we know you were wondering, Rius said the cats feel like velvet when you pet them.) 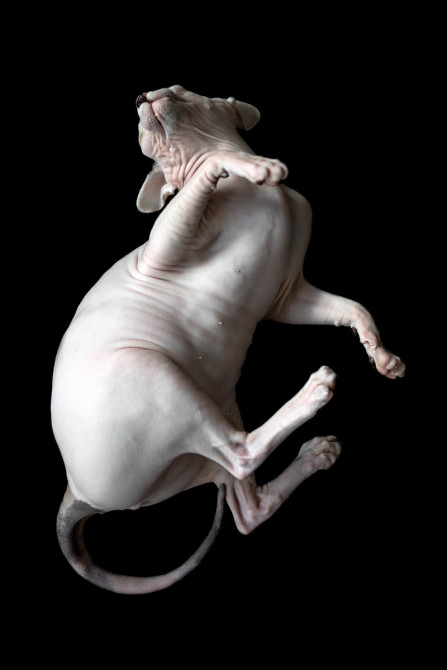 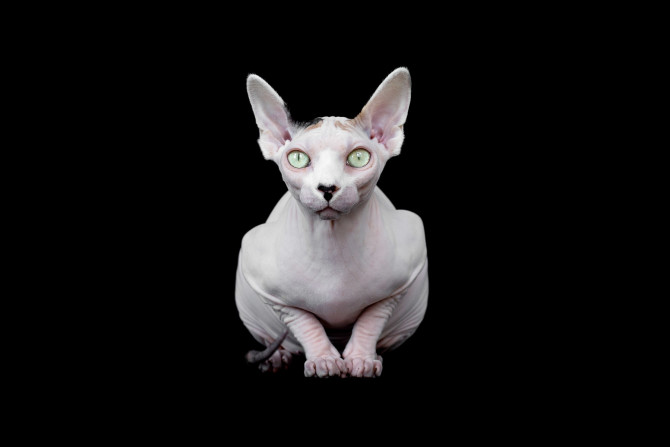 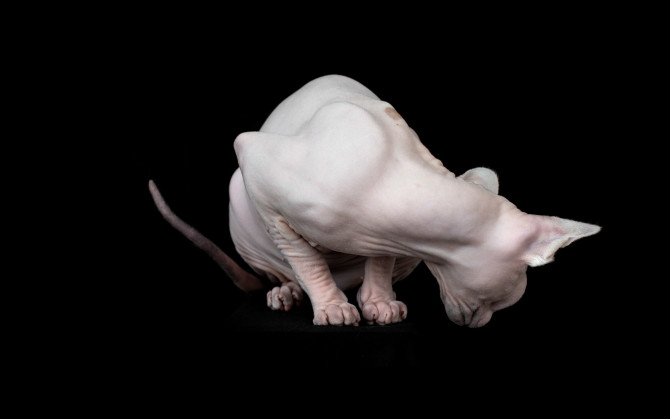 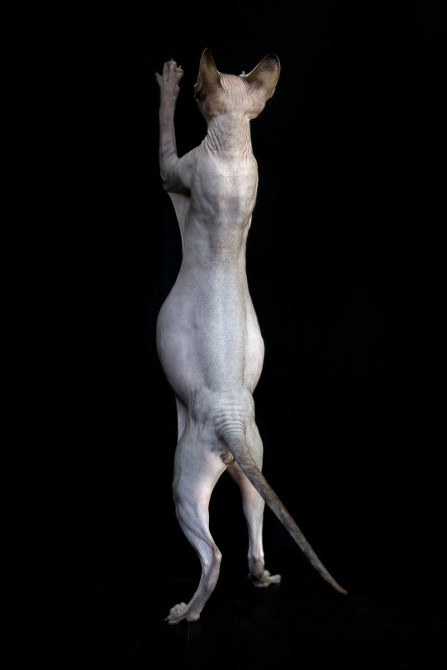 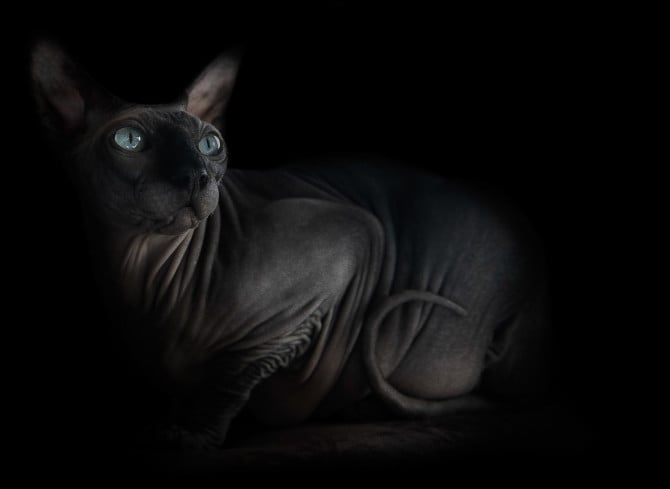 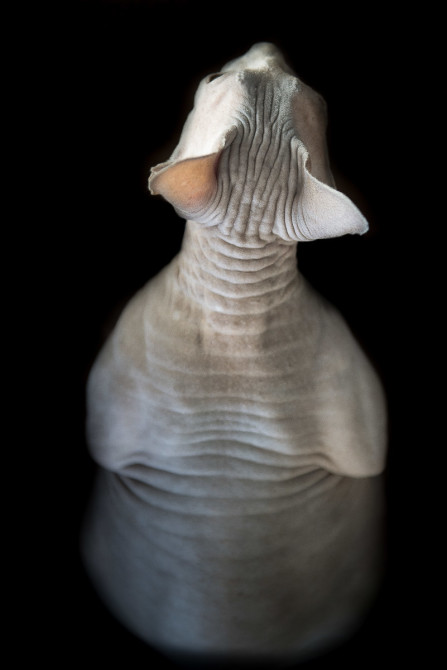 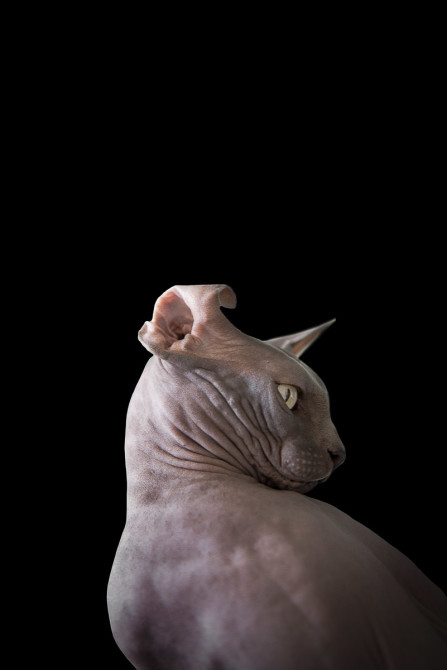 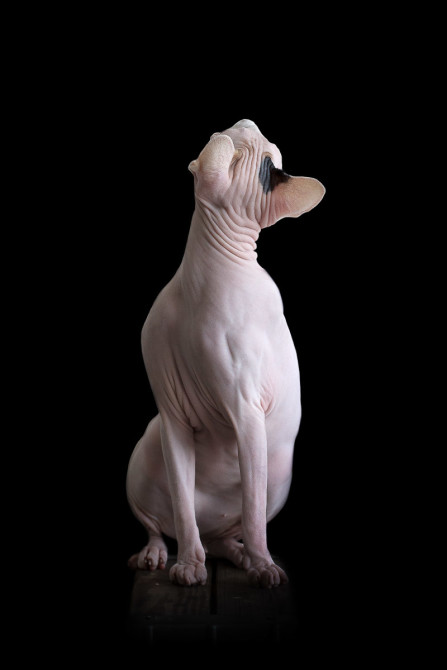 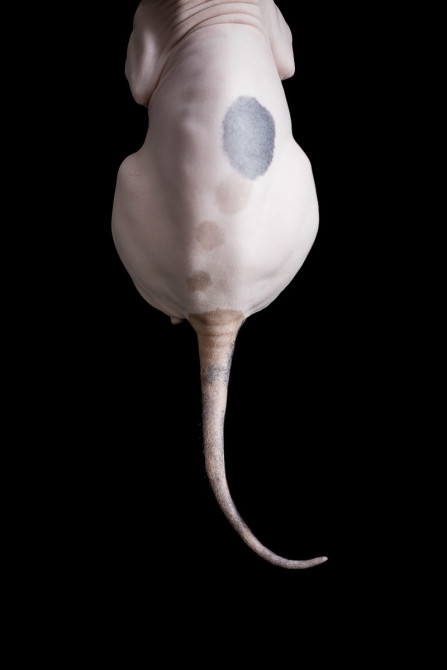 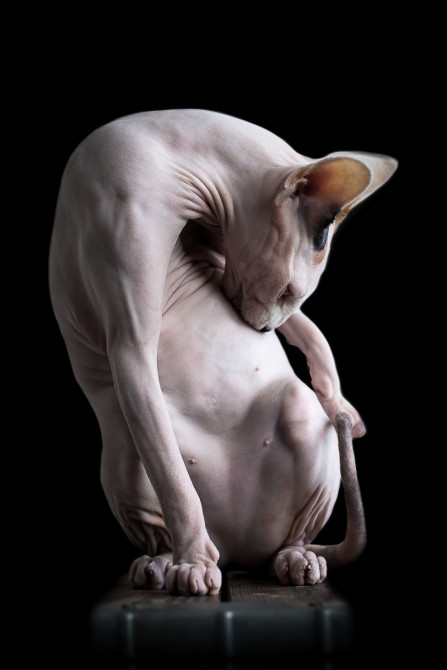 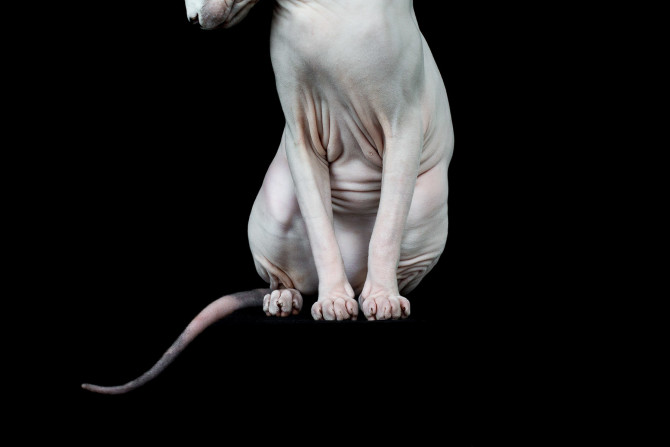 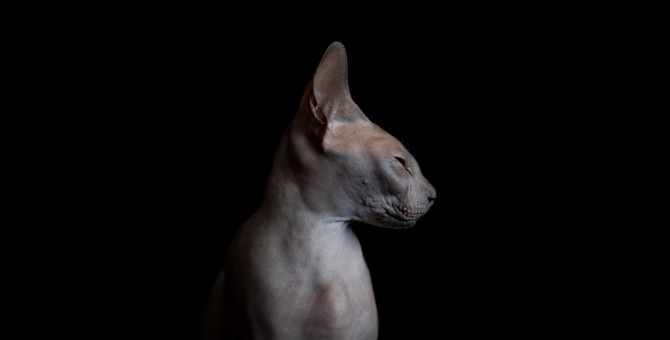 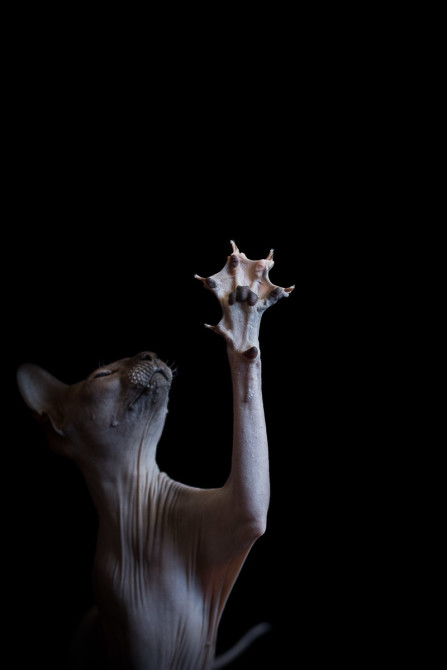 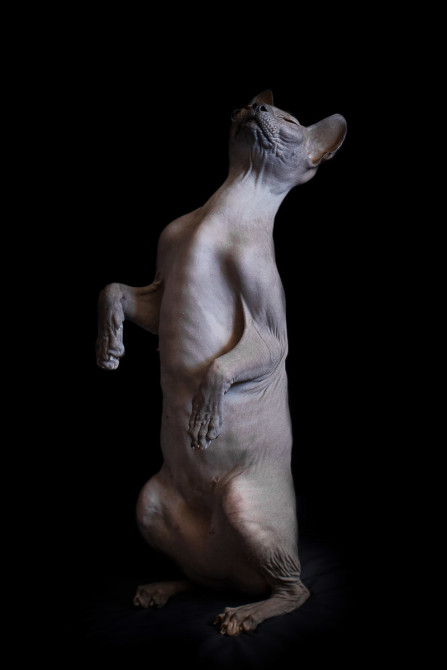 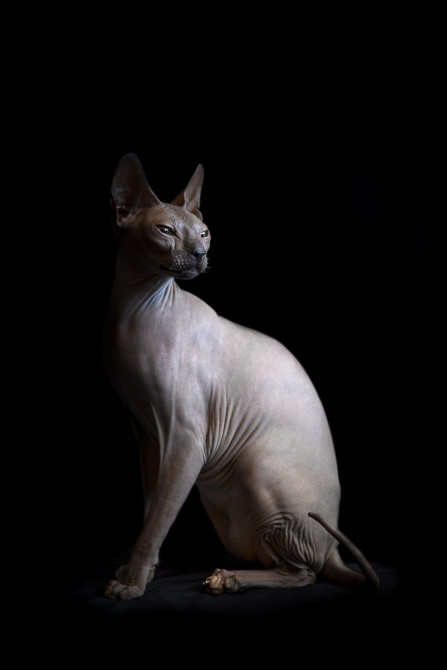 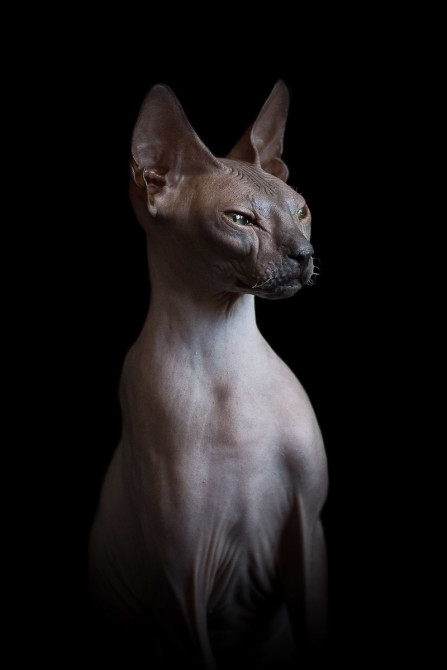 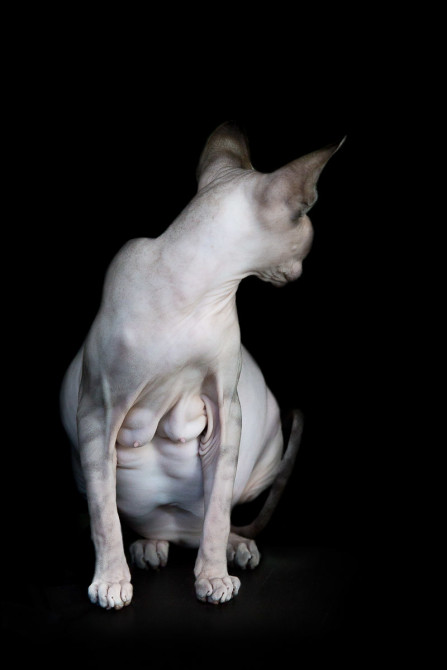 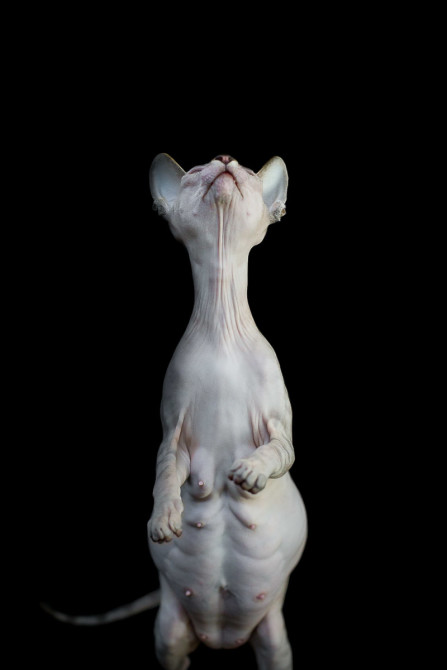 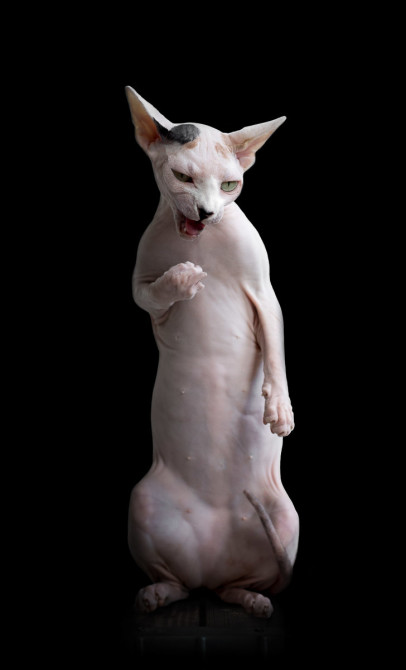