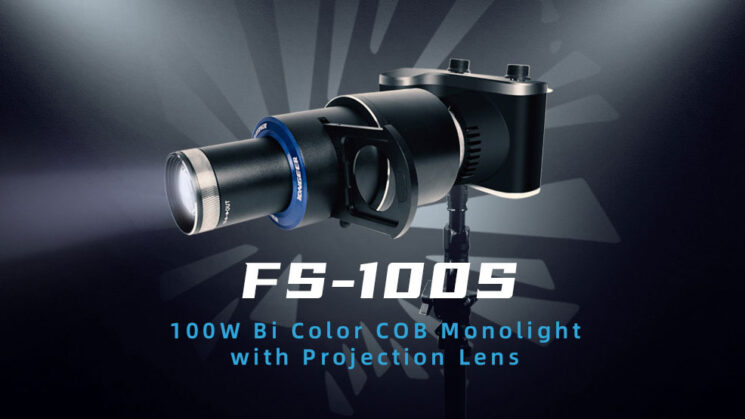 Digitalfoto has announced their new FS-100S bi-colour COB LED light, and the first review already appears to be up on YouTube. It’s an interesting if slightly odd-looking LED light in the fact that it seems to be emulating the look of a (somewhat large) mirrorless camera. It features a “Mini Bowens Mount” and comes with a gobo projector lens and an adapter for using the projector on lights with regular Bowens mounts.

Given the cost of 100W LEDs, the Digitalfoto FS-100S is not inexpensive. At $365, it sits well above the cost of similarly powered bi-colour COB LEDs from companies such as Aputure, Godox, Colbor, Nanlite and others. The Digitalfoto FS-100S does come with a little extra accessory that the others don’t, though; A gobo projector lens to let you project patterns onto a surface or subject. Why’s it shaped like a camera, though?

Mauro Licul has gotten his hands on one of the new Digitalfoto lights and has already posted a review going over its form factor and features. When I first saw photos and the video of this light, I thought “Oh, this is cool” but that somewhat quickly turned to “Buy why?”.

It definitely an interesting design, but I’m not sure I’m seeing the point. Yes, I get that smaller lights that weigh a lot less mean you can carry several of them in your bag and this would be great except that you don’t seem to be able to buy just the FS-100S light by itself without the projector lens at a reduced price. This means that if you want a bunch of them, you’re paying for a whole bunch of extra projector lenses you don’t want or need.

A quick overview of the specs shows some fairly reasonable and standard specifications. It’s bi-colour with a colour temperature range of 2800-6500K (+/-200K), has a CRI>95, full power adjustability all the way from 0-100%, works all over the world thanks to 100-240v compatibility and comes with a remote controller. It uses a 6cm “Mini Bowens Mount” for modifiers – of which there are only three, the included projector lens and reflector as well as an optional softbox.

Interestingly, the Bowens mount adapter included doesn’t go both ways. It lets you mount the projector lens onto standard Bowens mount lights but there isn’t an adapter to let you use standard Bowens mount modifiers on the FS-100S light’s “Mini Bowens Mount”. This is probably a good idea, though. With as compact as it is and having virtually no weight on the back end to counterbalance, if you were to add a big 4ft Bowens mount softbox on there, that’s a lot of strain on that tiny little 1/4-20″ socket underneath it. 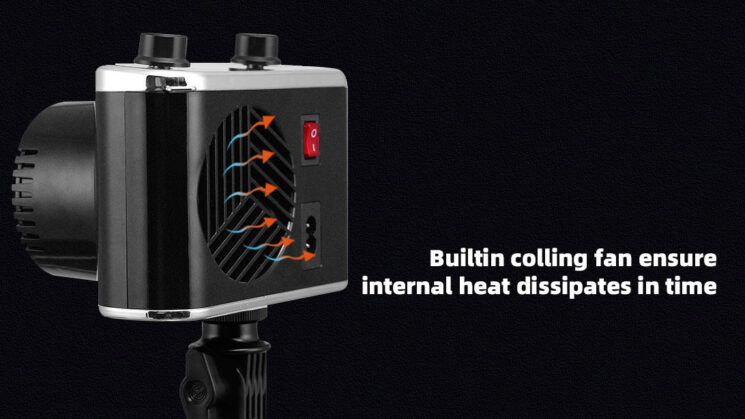 Also, being so small and compact, there isn’t much room in there for heatsinks for passive cooling. So, it has an active cooling system that uses a fan to force air through the system. Mauro doesn’t give us a sample in his video of how the fan sounds or how loud it gets when you’re using it, but if audio is a concern, it’s something you’ll want to check into before you choose to buy.

It’s always interesting when companies approach a certain type of product from a whole new design angle and Digitalfoto’s certainly done that here. But, it seems like it’s a bit of a one-trick pony. Its compact design is great for carrying multiple lights but you can’t just buy the light itself on its own. You’re forced to buy it with the projector so it’s not like you’re actually going to want to buy a bunch of them to really maximise on those space and weight savings. Interestingly, you can buy the projector separately for use with other lights.

Its lack of any “junk in the trunk” for counterbalance and also the fact that the only connection point underneath is a 1/4-20″ socket means it’s not going to be great with large modifiers. Although, that’s not something you really have to worry about, given that there are only three “mini Bowens mount” modifiers and there isn’t an adapter to let you use regular Bowens mount modifiers on it anyway. So, even if you could buy several of them without projector lenses for a lower cost, you’re still going to be fairly limited on what you can do with them.

And if you’ve already got a lighting system with Bowens mount lights you’re already happy with, you can pick up the Godox projector lens kit for $279 (probably a lot less when it invariably goes on sale). Even though the Godox solution doesn’t come with a light, it would be cheaper to buy this to use with your existing lights – and be able to keep using those lights for your regular stuff when you don’t need the projector – than it would be to buy the Digitalfoto FS-100S just for this one task.

I think if Digitalfoto offered this as a cheaper unit without the projector lens, it could potentially sell quite well for those who want to keep their kit as small as possible and aren’t using massive modifiers – especially if there were a regular Bowens mount adapter available for it. But as it is right now, I don’t know, it’s an odd product that seems to be a solution looking for a problem that doesn’t really exist. Spending this much for a light you’re only really going to use for one purpose – especially when other lights can be made to perform the same task – just seems like a waste of money.