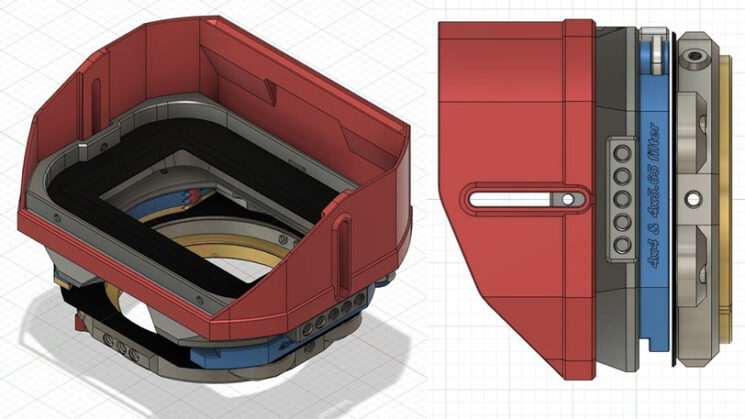 There are so many mini matte boxes out there on the market these days that it can be difficult to decide which to get. I mean SmallRig alone makes five different models now. But if you own a 3D printer and have some filament lying around doing nothing, then you can have a go at making this one.

It’s made by Edward Park at Mountain Breeze Studio, the same guy that does those cool retro lens cinema housings. This isn’t the first matte box Edward’s made, but it’s a complete redesign over his original and looks super slick. It also holds both 4×4″ (100x100mm) and 4×5.65″ (100x150mm) square filters – which is more than can be said for some commercial options.

As well as regular glass square or 4×5.65″ filters, Edward’s mini matte box also allows you to attach a rotating filter like a circular polariser to your lens and still have access to rotate it from the outside of the matte box – also another feature distinctly lacking from many commercial matte boxes. It takes a slightly unconventional approach of being more like a fixed permanent hood than the typical matte box, which uses flags. But the hood is adjustable and can be moved forward and backwards and locked down into the position you desire when using it with ultra-wide angle lenses.

Aside from the filament, you only need a handful of bits of hardware. You need four M4 x 25mm screws, 2 M5 x 17mm screws and a 5mm x 15mm spring. That’s it. Everything else is printable at home. Edward used carbon fibre PLA to make his, as it’s the closest thing he could find to a matte finish, but you could also line the inside of the hood with adhesive-backed velvet if you only have regular black PLA, PETG, etc. that isn’t quite dully enough in texture.

Even though I already have three matte boxes, I might have to print up one of these to have a play with when I set my printers back up!

How To Convert A Waste Basket, A Drawer Organizer And A Sprinkler Donut Into A Pro Matte Box