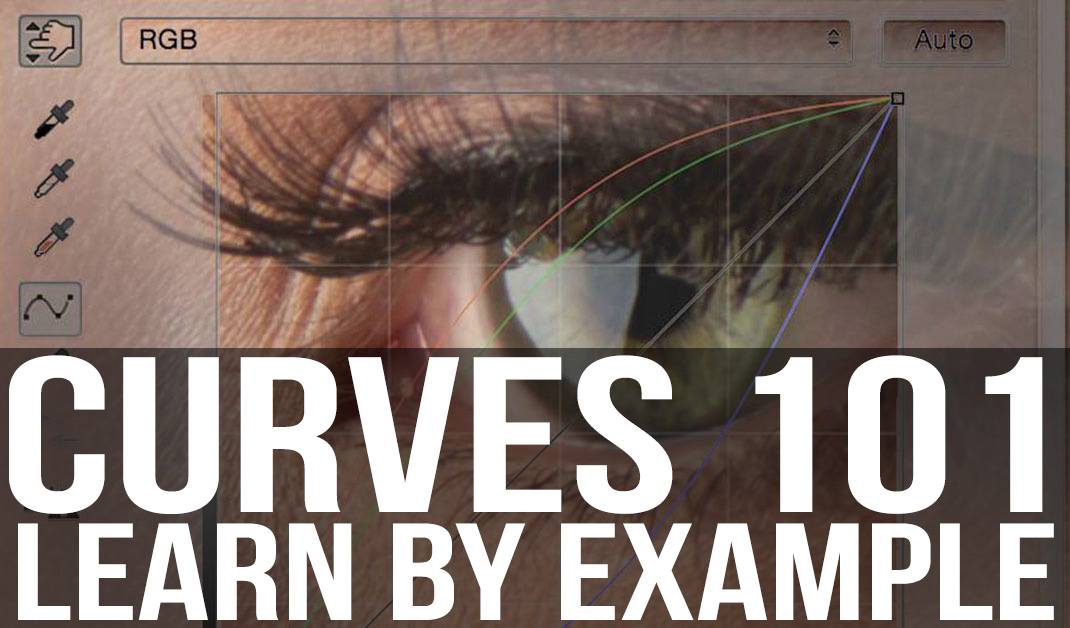 A few days ago, we posted that little fun game about curves. You should go and try it now! Some people really struggled with this one, so I thought it might be a good idea to explain this here. you can consider this a curves crash course.

Curves. For some it’s just a big mystery, for others it’s daily routine. For those of the first category, here’s a little crash course. You can probably consider this a Curves Adjustments Layers 101. Just make sure you understand each of the workflows I explain.

What exactly are curves doing?

The curves adjustment layer in Photoshop controls brightness on the RGB channel (as well as each individual channel). The X-Axis notes the input and the Y-axis shows the output. Bottom left is pure black (0,0,0) and top right is pure white (255,255,255).

The line in the middle (or curve) maps inputs to outputs. So, for example, without any adjustments the curve ‘line’ is just a straight diagonal line from bottom left to top right – everything is mapped to its value. Zero maps to zero, 255 maps to 255, and so does everything in between.

Another easy example: a straight horizontal line at the middle of the curves window (which we will also explain later) maps everything to the same level. Zero is mapped to 127, 255 is mapped to 127 and so on. If you had a black and white photo, all the pixel will be mapped to middle gray. 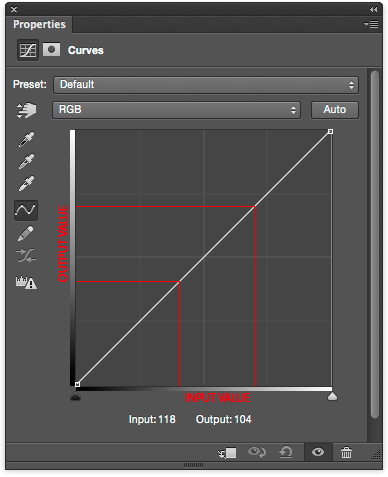 Now, you can start making adjustments? – You can add a dot (or dots) to that line and move them around to create shapes like s-curves and all kind of non-linear curves. (you see why it’s called “curves”, right?)

It gets better though, in the drop down menu, you can choose to work on all channels together which will impact the overall contrast/brightness of the image or you can work on each of the Red, Green & Blue (RGB) channels separately.

But to understand curves, you need to understand a little bit of color theory – at least how colors are mixed (and we will have another tutorial about colors soon. Hit us in the comments if you are interested)

Here is an example: 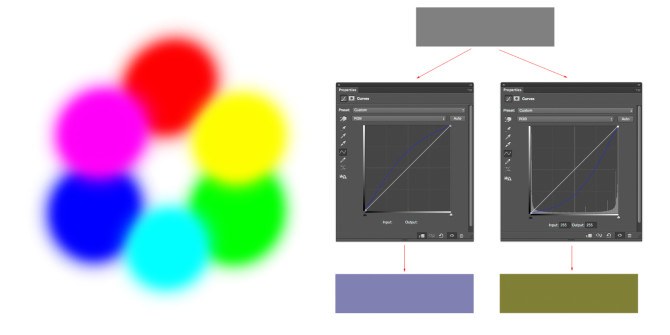 Now, here are 10 examples from our Curves Quiz that should break down curves for you. Just like with many other reverse engineering we are going to look for clues. Those clues combined with some basic knowledge about color should bring us to the right answer. 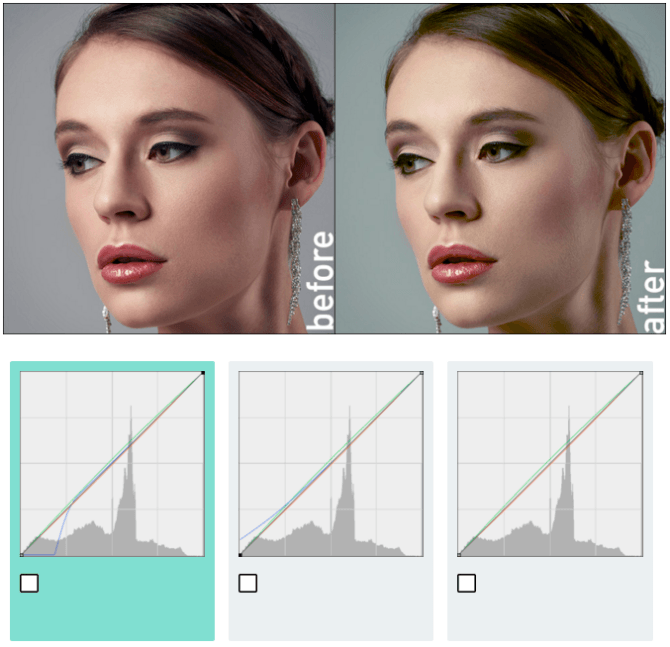 There is a big clue here and that is that transformation to the blacks. If you look closely at the blacks (which are visible in the hairs), they become yellow. Woohoo – you’ve learned that before – we’ve dropped blue in the blacks to archive that effect. Luckily there is only one curve that takes away the blue. 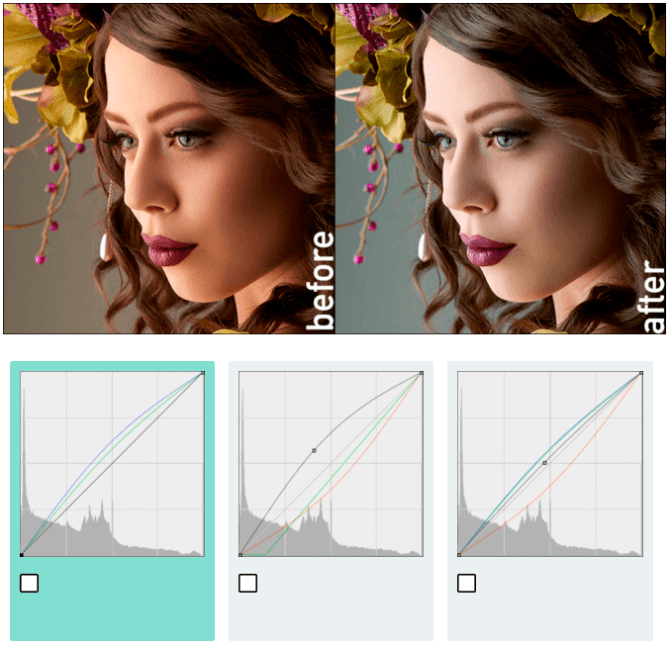 In this Image, the skin tone has changed – it is less saturated and less yellow/reddish. This could have been done by dropping the red – but that would make the image darker. This is why curve three is wrong. The second curve is wrong, because of the green channel – lowering green would change the blacks into magenta (remember – removing green = adding red and blue). So Curve one is correct. We’ve just added some green and blue. Woohoo – magically desaturated skin tone by adding colors. 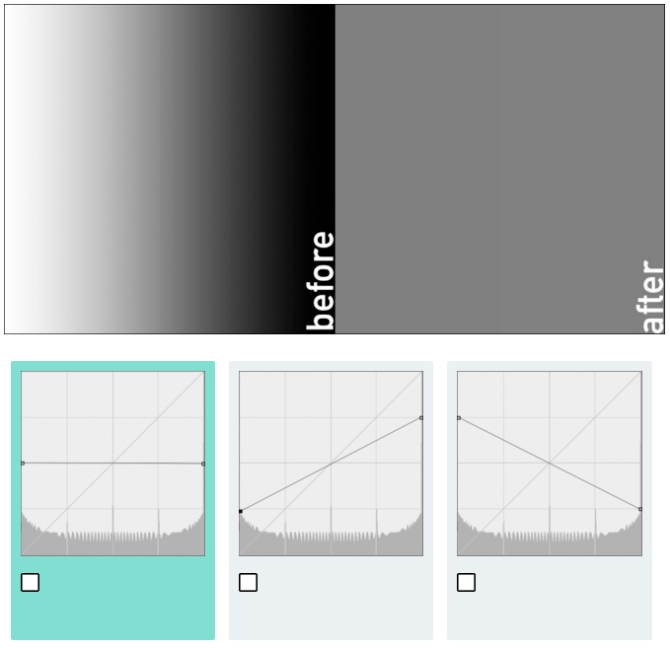 Okay, this one is fairly easy: mapping the black to grey and mapping the white to grey. Woohoo, the explanation is already in the top part of this tutorial. 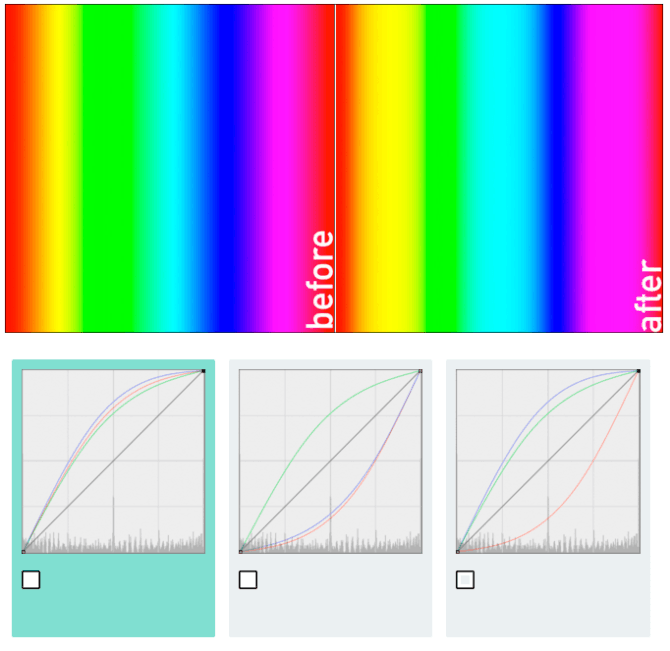 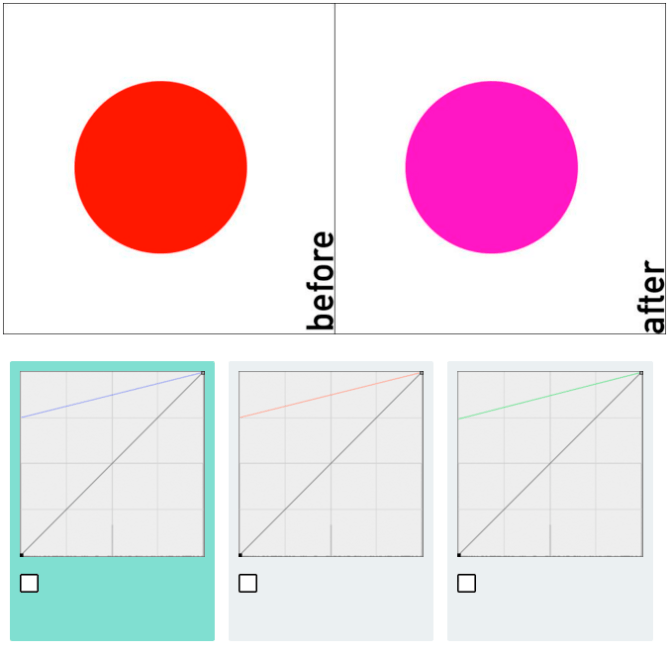 Another easy Question. RED plus BLUE = MAGENTA. So the first answer is right – we are adding blue. Woohoo, two primary color mix questions in a raw 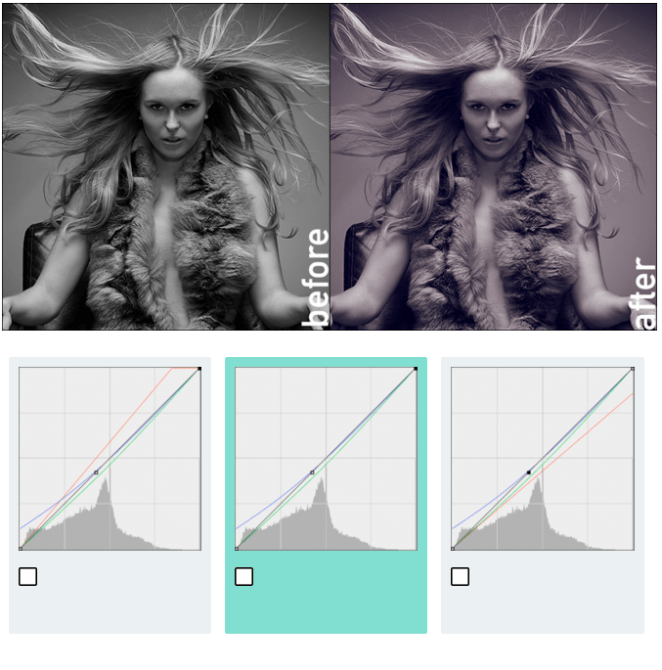 A little reverse engineering on example # six: All three curves are almost the same – but the red in the highlight is different. So let’s have a look at the highlights.
Are they cyan (removing RED)? Are they RED (adding RED)? No! They are just plain white – so it has to be the middle one – no changes in the red highlights. Woohoo, covered tweaking the highlights with a single channel 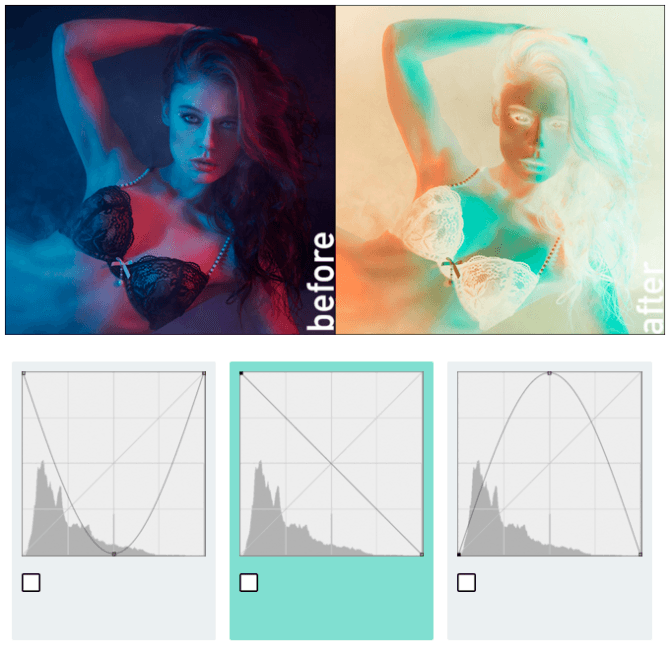 This one is easy: RED became CYAN, BLUE became ORANGE. So? Yes, it’s simply inverted. Black is mapped to white and white is mapped to black. 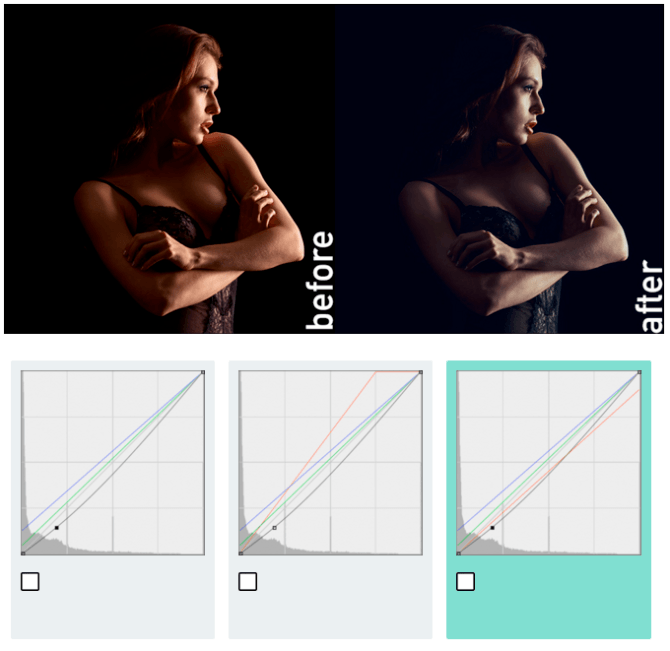 By now, you should be able to find out which one is right… old on a bit before looking at the answer. Look for what is similar and what is different. 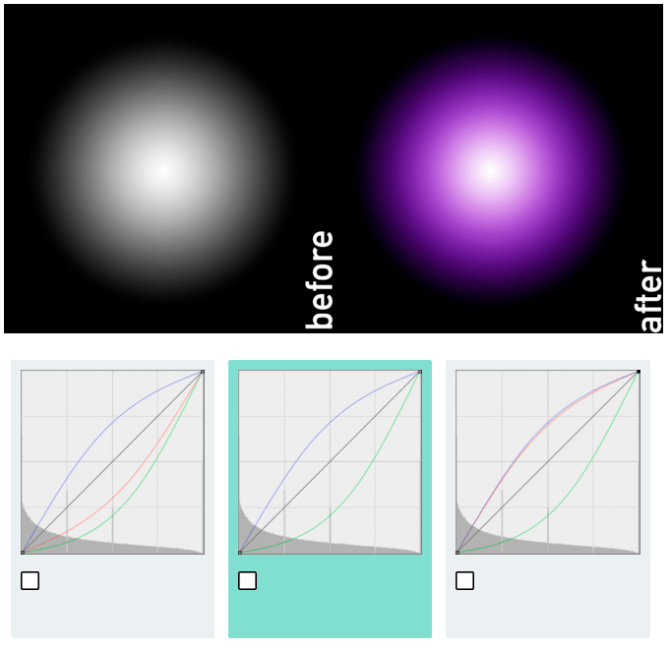 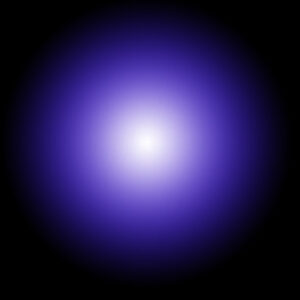 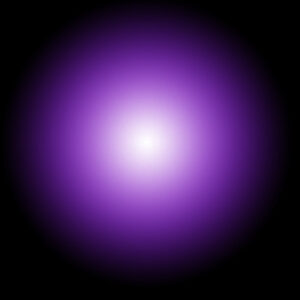 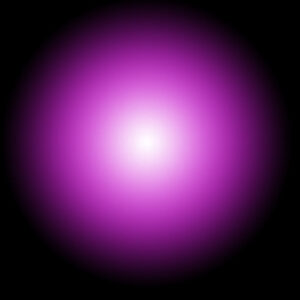 See, it’s quite a difference. 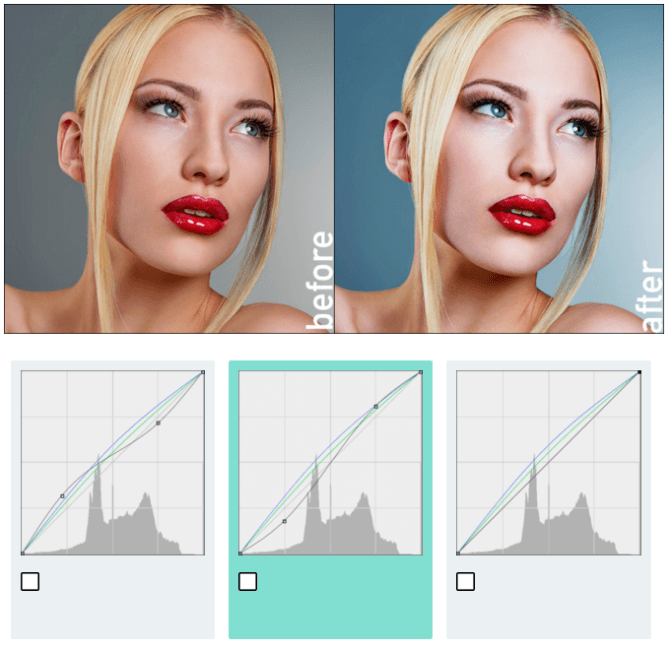 Nearly done – are you as excited as I am? This one is easy.

The change in colors is the same in all three curves, but the RGB-Curve is different.

The slight S-Curve makes shadows darker and lights brighter – you get more contrast.

Now you can go back to the quiz and impress your friends ;-)